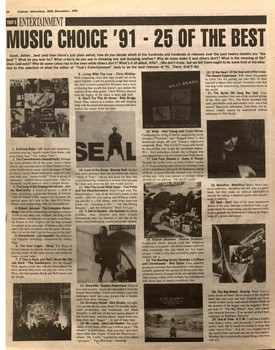 M S C O E '91 - 25 O T E B UI H I C C F H
Good...better...best (and then there's just plain awful), how do you decide which of the hundreds and hundreds of releases over the past twelve months are "the best"? What do you look for? What criteria do you use in choosing one and dumping another? Why do some make it and others don't? What is the meaning of life? Does God exist? Why do some cakes rise in the oven while others don't? What's it all about, Alfie?...(We don't know, but we felt there ought to be some kind of introduc tion to this selection of what the editor of "That's Entertainment" feels to be the best releases of ' 9 1 . There, that'll do) 20. Of the Heart, Of the Soul and of the Cross: 8. Living With The Law - Chris Whitley: The Utopian Experience - P.M. Dawn: I'm grateful
With a haunting voice that slips in and out of the upper register, a gift for penning songs that sound like they've been around for 50 years, and a style of playing that recalls but doesn't just imitate the masters of the slide guitar, Chris Whitley showed how the legacy of the blues is alive and well. to Chris Orr for putting me onto this. A clear reproof to those (like myself, formerly) who feel that Rap is the most boring, monotonous music in the world.

21. The Byrds (90 Song Box Set): Four
luminous cassettes from one of the seminal groups of the '60's and '70's. The Byrds invented folk rock, psychedlic rock and country rock - not a bad record! Massively influential, Tom Petty, for in stance, simply cannot be understood without reference to The Byrds.

9. Don't Try This At Home - Billy Bragg:
Essex Man reborn as a rocker, but still keeping faith with the social and personal concerns that have fuelled his career from the start.

16. Weld - Neil Young and Crazy Horse:
Continuing his string of utterly magnificent recent releases ("Freedom" and "Ragged Glory"), this double-set ranges all over Young's impressive songbook. Note: This is LOUD music and should be played that way to get the maximum impact. 50 + , Neil sometimes sounds like a Hippie who was dipped into a vat of concentrated Punk Rock.

1. Achtung Baby - U2: Dark and dangerous, excellent playing, superb vocals from Bono, and even better than "The Joshua Tree".

2. The Commitments (Soundtrack): Perhaps
the most unlikely hit of the year, from a band whose only existence prior to Alan Parker's trawl of the Dublin music scene was in the pages of Rod dy Doyle's novel! Sweet soul music, sung with pas sion and, yes, "commitment" from a group of musicians - Andrew Stong in particular - who, in dividually would seem to have a bright future.

17. Use Your Illusion 2 - Guns 'n' Roses: 10. Luck of the Draw - Bonnie Rait: Slicker
and more polished than her breakthrough album "Nick of T i m e " , but no less good for that, this is an outstanding release by a woman who has paid her dues and deserves her late-found success. Despite the awful lyrics to most of these tracks, G 'n' R can certainly take a bow for restoring some of the raunchiness and good old fashioned energy of Rock. A record like this reminds you - if you're pf that age - why your parents so strongly disap proved of you playing "the devil's music".

3. The Song of the Singing Horseman - Jim
my MacCarthy: A touch of poetry, a dash of Celtic mysticism, a generous helping of melody - One of Ireland's best songwriters reclaims the musical gems he's lent to the likes of Christy Moore, and stamps them with his own authority.

11. Into The Great Wide Open - Tom Petty
and the Heartbreakers: Petty's back with The Heartbreakers - one of the best rock bands in the world - after his solo outing and Wilbury warbl ing and this is a fine album, with some stand-out tracks like "Learning to Fly", "All The Wrong Reasons", and the reflective "Built To Last".

4. Robert Johnson - The Complete Recor
dings: One of the outstanding, revelatory releases of this or any other year. Johnson, the King of the Delta Blues, has influenced everybody from Mud dy Waters to Eric Clapton, but the man himself is a genius in his own right. If Johnson did sell his soul to the devil in order to play the guitar like this, who's to say he didn't get the best part of the deal?

12. Vz Set in Harlem - De Dannan: In which
Frankie, Alec, Eleanor and their friends demonstrate why De Dannan is still one of the finest, most challenging, traditional groups around.

22. Metallica - Metallica: Heavy Metal rais ed to sublimity, Metallica are not only a superb band, but they make no musical apologies to anyone for taking a despised genre and transfor ming it entirely. 23. Seal - Seal: One of the most impressive debuts of the year, Seal has a fabulous voice, a ge nuine talent for songwriting, and the musical skills to give grounds for thinking he's only at the begin ning of a great soul career.

18. Sharon Shannon - Sharon Shannon:
Traditional music played with the effortless simplicity of a master, this debut release confirms what everybody who has heard her live knew already - what a very fine accordion player (and fiddler) she is.

6. The Soul Cages - Sting: The King of
Causes returns to what he does best, writing and playing some of the most mature and powerful music around today.

7. If This Is Rock and Roll I Want My Old Job Back - The Sawdoctors: Are we biased?
Well, maybe a little! But with this debut album The Docs showed they were not only the voice of the West, but had genuine Rock and Roll hearts into the bargin.

19. The Bootleg Series Volumes 1-3 (Rare
and Unreleased) - Bob Dylan: Four superbly produced cassettes that demonstrate with unques tionable authority the genius of Dylan and why, when the history of music in the second half of the 20th century comes to be written, his contribution will dwarf that of nearly everybody else.

13. Storyville - Robbie Robertson: Tales of
love and mystery, music and atmosphere from the former Band leader. A dark and smokey voice that insinuates itself into your dreams like a voodoo spell from New Orleans. 24. The Big Wheel - Runrig: What? You've never heard of them? Never heard of the Scottish band who mix rock and trad, English and Scots Gaelic in their lyrics, and outsell Simple Minds in the domain of the haggis and the bagpipe? Well, get hold of "The Big Wheel" then, and expand your musical horizens. (You can pick up their back catalogue in Mulligan Records) 25. Out of Time - R.E.M.: I still have trouble with Stipe's voice, and personally I prefer their earlier stuff, but it would be foolish to deny that with "Out of Time", R.E.M. have stepped out of the world of the cult band and into the big leagues. Whether this is necessarily a good thing, only time will tell.

14. On Every Street - Dire Straits: All right,
you can talk all you want about CD-friendly music, sleek production, and headbands, but Mark Knopfler is still one of the best guitar players in the world today, and this album - much lower-key than their last "biggie" - is one of their best.

15. Mr. Lucky - John Lee Hooker: The grandaddy of the blues, John Lee's follow-up to "The Healer" is even better. And you don't get much better than that. Catch "Cover the Waterfront", where " M r . Lucky" is joined by one of his oldest "groupies", Van_Morrison - stunning!