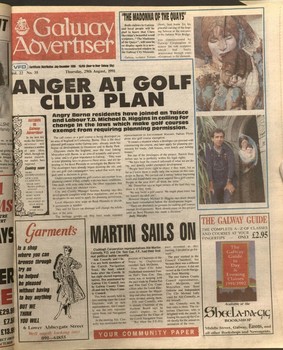 Both visitors to Galway Drori, best know for his and local people will be graceful carving of the leap glad to know that Clare ing Salmon at the entrance Sheridan's beautiful wood to the Salmon Weir Bridge, sculpture, "The Madonna was commissioned by of the Quays", will soon be Galway Corporation to on display again in a new restore the oak sculpture ly reconstructed window in which had badly the Galway City-Museum. deteriorated through years Galway sculptor Yorain of exposure to the elements.

A N G E R AT G O L F I CLUB PLAN
A n g r y Barna residents have joined a n Taisce a n d Labour T.D. Michael D. Higgins in calling for c h a n g e in the laws which make golf courses e x e m p t f r o m requiring planning permission.
The call comes as a golf course is being developed on an area of bogland in Corbooley, Barna. This is the third planned golf course in the Galway area - already work has begun on developments in Oranmore and in Bushy Park. Objecters claim the bogland, near the road linking Moycullen with Barna, is an area of scientific and ameni ty value, and is of great importance to Galway. They want stricter planning laws to preserve these areas, and are ap pealing to An Bord Pleanala to investigate the Barna site. The developers have already begun draining the site, and the anti golf club campaigners have asked that work stop ped until a decision is given Under current regulations golf courses are exempt from planning control if they comply with two basic conditions. One deals with exits onto roads, the other stipulates that the course must not obstruct views. City and County Manager Seamus Keating says this development complies with these regulations, and so the developers do not need to apply for planning permission. Local objectors now want an Bord Pleanala to decide if permission is needed. They and An Taisce say drainage will change the whole representations to bnvironment Minister. Padraic Flynn about this golf course exemption."It creates a situation where a developer can proceed with constructing the course, and later apply for planning per mission for roads, club houses, even hotels and holiday homes." But one of the developers of the project, Patrick Donnellan says he is perfectly within his legal rights. "We have kept the council informe'd of what we are do ing, and qualify under exempted development "People have every right to object if they want, but as far as I know there is really only one woman on this cam paign in Barna. We carried out a survey before beginning work and found there was great support for a golf course. People in the area don*t all'think the same." Mr. Donnellan says as legal owners of the land they can drain it if they want. "We may build a golf course. We might plant trees, but we haven't decided yet." However Deputy Michael D. Higgins says there should have been consultation before the development began. "There are absolutely no grounds for making golf courses exempt developements. Work should cease on this project face of the area. until an Bord Pleanala has made a decision." The heritage groups say they have made repeated Judy Murphy

Claddagh Corporation representatives Aid Martin Connolly, PD. and Cllr. Tom Cox, F.F.. had thetr f.rst real political battle recently. AloConno1ly and Cllr. position of Chairman of the Cox are both members of Trust by Oughterard the Corrib Navigation member, lack McQuinn. Fine Gael Cllr John Trust, the body which Mulholland nominated Fianlooks alter the Corrib. It na Fail's Tom Cox. This has eight elected represen move was in keeping with tatives, five nominated by the pact made by Fiartna Fail Galway City Council, two and Fine Gael City Coun by Galway County Coun cillors after the Local Elec cil and one by Mayo Coun tions to ensure the Mayor ty Council. ship and other key positions This body recently held its were divided among them. first meeting since the Local P.D. man Connolly, who Elections, with its new is already Chairman of the representatives. Aid Connol Harbour Board says he ly was the only represen didn't expect to be tative from old Navigation nominated for the Chair of Trust. the Corrib Navigation Trust. At the meeting Aid. Con "But when the FF./F.G nolly was nominated tor the

pact resumed at this meeting. I decided to go for ward." The pact worked in the Council Chambers, but because there was a different balance of power, it did not suceed at the Corrib Naviga tion Trust Meeting. The two Galway County Council representatives. Jack McQuinn. and Moycullen man Sean Osborne and Independent City Cllr Michael Lally voted for Aid Connolly, as did himself. Aid. Connolly won by four votes to three. The vic torious Chairman, who is delighted with the result, is leading his team up the Cor rib shortlyforthe annual ex animation of the river.