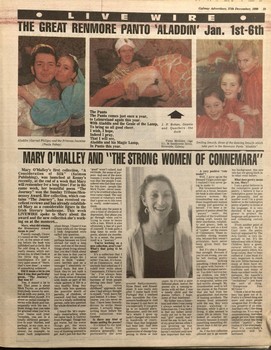 The Panto The Panto comes just once a year, to Leisureland again this year. With Aladdin and the Genie of the Lamp, To bring us all good cheer. I wish, I hope, Indeed I pray, That I will see, Aladdin and his Magic Lamp, In Panto this year.

Smiling Smurfs, three of the dancing Smurfs which take part in the Renmore Panto "Aladdin"

MARY O'MALLEY AND "THE STRONG
Mary O'Malley's first collection, "A Consideration of Silk" (Salmon Publishing), was launched at Kenny's recently, at the end of a week that Mary will remember for a long time! For in the same week, her beautiful poem "The Journey" won the Sunday Tribune/Hen nessey Award. Her collection, which con tains "The Journey", has received ex cellent reviews and has already establish ed Mary as a considerable figure in the Irish literary landscape. This week LIVE WIRE spoke to Mary about the award and the new collection she's work ing on at the moment...
Mary, what did winning the Hennessey Award mean to you? Funnily enough, I know it's meant on the "outside" a lot, in the sense of com ing before the book was published and so forth. But the odd thing is, what it really means, which sur prises me, is when I look at the little dog on the mantlepiece it's just a very quiet sense of "there, that's now done", a sense of something achieved. Did it mean a lot to you that it was that particular poem, "The Journey", that won it? Yes, it meant a lot to me. That poem is about Mick Taylor, as probably everybody knows by now, but as with any poem, it's as much about myself. It's about an initial coming-toterms with death and con sequently with life too. I think things that you take for granted when you're in your 'teens and your 'twenties, you see in a totally different perspec tive in your 'thirties, and perhaps, in my case, as a mother as well. You're slower, for example, to make rash judgements about things. I found it was a time when all the things I took forgranted were called into question. To take an example, perhaps because we lived abroad for such a long time, and one of the many things about living abroad that you don't think about at the time is that you're away when people die. I used to think "wakes" were terrible and as a teenager I absolutely re jected them. But now I think they're not such a bad thing at all. Because the whole notion of dealing with death as part of the whole pattern of life is a very healthy thing. Any death calls into question the possible death of parents, of children, of yourself. And that, unless you're a totally unthinking person, calls into question the whole direction of your life. I found the '80's stunn ingly materialistic when we came back to Galway from Portugal. Things has got worse, but the worse things got, the more materialistic the whole way of thinking seemed to get. And I just felt that the "good" wasn't valued. And rectitude, the sense of pur pose. And one of the main reasons I wrote the poem was that the people I con sidered who had done most for this town - people like Mick Taylor - never seem ed to be credited when the time came round. The vast amount of voluntary work that's gone on in this town is really undervalued, I think. I think also the poem is also a kind of chronicle of depression, that phase you go through when you're trying to come to terms with a loss. Which is also ultimately a loss of a part of yourself. It took quite a long time to write the poem, almost six months. So in a sense, the poem itself is a "journey". You're working on a new collection, aren't you? What's that going to be about? It's a collection that I never really intended to write! You see, it's focus ed on Connemara. And if anybody had asked me if I would ever write about Connemara, I'd have said "no". I've always been rather wary of the whole business of Irish people delving into their "poor, deprived, rotten childhood" approach. And also I had always thought to myself, "well, leave the past behind. It's done." Of course, you can never do that. I have been literally driven to write these poems. I actually began writing them before the first collection was finished. Is there any kind of theme uniting the poems? It's linked by the land scape of home, Con nemara generally, but particularly the area

OF CONNEMARA"
A very positive "role model"! Well, I gave up on the Blessed Virgin years ago! I realised I was never go ing to make it! But Grainnemhaol has acted as a focus, because the book is also about Con nemara women. My Grandmother was one of those magnificent women - strong and powerful in herself. I've done a se quence of poems about the " p u c a n " (note: the smallest of the traditional sailing craft, known for their sturdiness, reliabili ty and grace), both as themselves and as a kind of' 'cypher ior the women of Connemara. Those in credibly strong women who, because they weren't articulate, have never been given their due credit. But it's also a danger, that strength Because if you're not strong, you can be left feeling pretty useless, lacking something. I think for once I'd agree with Darwin -1 think the strongest surviv ed. You didn't survive los ing children, you didn't survive losing your family years. So it's now a quite to emigration, unless you different place. And so, the had terrific strength. My poems are a coming-to- Grandmother used to tell terms with all that. I was me stories of the Famine a lonely child and the that she had from her poems reflect, I hope, grandmother. And stones of boating accidents. The some of that loneliness. women lived intimately My father was a fisher with the sea, they were man and when I was young always watching it I always wanted to be a Because, while it gave a fisherman too. I was lucky living, it also seemed to in that my father never claim life in return. You really put me in the nor looked at weather dif mal "girl" mould. And I ferently because it meant loved the sea. In fact, one something something dif of my great heroes when I ferent than it did for peo was growing up was ple inland Grainnemhaol! And I So, if the first collection haven't realised until now allowed me to go outside how important that was. my background, this new one has me going back in to what went before. What does poetry mean to you, Mary? I am a great believer in the redemptive power of poetry. I believe it has a redemptive power for peo ple personally. And on another level I'm a great believer in the redemptive power of poetry in terms of the language. It is very distilled. It has a great power to protect the language and preserve it, and redeeming certain words. From another point of view, the work I do for Cuirt (note: the poetry festival organised by The Arts Centre) is very im portant to me It's the educational side of things Children have a great, natural ability to ap preciate poetry which, to a large extent, they've been robbed of. I also think it's very important to reach the over 'fifties because so many of them have im mediate access to the oral tradition and many of them can either recite, for instance, the Apostle's Creed in Latin or do long "recitations" - you know the sort of thing, "Dangerous Dan MCGrew'! I think a lot of the snob bery has gone out of it. Poetry is a broad thing and more and more people recognise that It's the nar row preserve of an elite. And that's why I like doing readings too. It's a way of communicating. And when people get over their initial mm inhibition about this thing i f called "poetry", they m y realise it's for everybody That it's everybody'i possession and in heritance

around Ballyconneely, Slyne Head, and Roundstone. It was really only after I came back from Portugal that I realised how incredible the Con nemara landscape is. And the impact it can have on you especially if you grow up in an isolated place. Remember, until the mid 'BO'S where I grew up hadn't changed very much in hundreds of years. Other than that language had been lost. And then suddenly there were generations of change hap pening in three or four