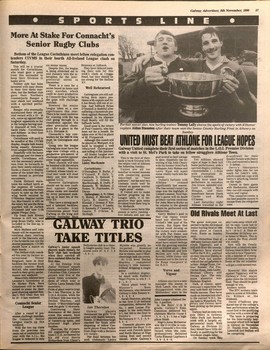 L More At Stake F o r Connacht's Senior Rugby Clubs
Bottom of the League Corinthians meet fellow relegation con tenders CIYMS in their fourth All-Ireland League clash on Saturday.
This will be a crucial match for Corinthians, who must gain a point from this encounter to keep their Division 11 hopes alive. Neither side has been favoured with easy draws in their first three mat ches, but the Belfast club gave their Northern counterparts Bangor a near shock last weekend with a spirited perfor mance. Bangor, who eventually maintained their 100 per cent record with a 23 - 16 win, came up against thentoughest opponents so far in the League having easi ly disposed of both Connacht clubs - Corinthians and Athlone - in their first two matches. Corinthians will need to be mindful of this CIYMS display, despite both teams being equally distanced from League title honours. Hopefully with the home advantage and the team's mettle, Corinthians will win the necessary posses sion from its forwards to give their newly-enforced backs a chance to display some of the talent they've been denied in previous encounters. Derek Holland main tains his outhalf berth at the expense of Loman Caulfied, who returns from injury to take up the left wing berth vacated by O'Riordan. Regular centre Ian MacDonald is still on the injury list and the three quarters will be Jarlath O'Connell and new U-20 player Fergal Daly. Up front lock Kieran Browne is still out, and prop Brian Duffy, who is included in the line-up, is doubtful. Mick Mullens and John Noone will be expected to continue their sterling work in the line-outs, and if the forwards can win the desired possession, CIYMS should have a match on their hands. The Belfast club, coach ed this year by former in ternational Trevor Ringland, have in their backline the former Irish schools centre Mark McCall, who contributed much to their gritty perfor mance last weekend. Meanwhile Athlone face Leinster's Greys tones at Dr. Hickey Park. Here Greystones will be deter mined to atone for their poor showing against Sun day's Well when they fell by 13 - 3 last weekend. six senior teams. Despite this, the league is being stretched out to mid January with the interuption for the interprovincial series in December. There is a case for a series based on home and away matches, which could be more productive in Connacht than filling in the gaps with challenge matches. However the senior League takes on a new significance this year. There is far more incentive for winning with the top club going through to a roundrobin against the other provincial cham pions for a place in the A.I.L. Division 11. Connacht's top con tenders for the 1990/91 title must be Galwegians and U.C.G. Going into the league Galwegians must have the edge over College with a productive pre-season of challenge matches against some tough opposition. Their chances will also be boosted with the return of All-Black Warren Gatland, whose timely ar rival next week will most likely see him line-out against U.C.G. However Galwegians should not be over confi dent against College, whose ranks are boosted by Army personnel mak ing up at least ten of the first XV. They have a strong pack and a talented backline, which includes Irish Universities player Niall Furlong on the wing and Galway footballer Brennan at fullback. They have delayed nam ing their side for this week's clash at Creggs Road, but they should be too strong for the Ballina XV.

Galway United complete their first series of matches in the L.O.I. Premier Division with a visit to St. Mel's Park to take on fellow stragglers Athlone Town.
This is the first of their back to back fixtures with the return visit of Athlone the following Sunday. United are all too familiar in recent seasons with conducting games described as "four pointers", but the next two contests could well be viewed as games worthy "eight point" status. If United are to make further progress up the League table, it is im perative they gain some dividend from their trip to the Midlands. United's away form this season is sorry reading five defeats and iust one goal scored in their outings to date. Hopefully the re uniting of big John Cleary with his former Oriel Park collegues Joey Malone and Larry Wyse will inject some vitality back into the season. United's fortunes with Athlone crossed significantly last season. The fine second round Cup saga was the highlight of United's season. Next Sun day's game will do doubt produce curious emotions for John Morris-Burke as he returns to the ground where he performed with distinction. Gerry Mullen's goal in that Cup replay would head any shortlist for United's 1990 goal of the season. But hopes that United could develop on the victory were weaken ed with Pat Dolan and Paul McGee's departure. Indeed Galway followers must have mixed feelings with the growing number of ex-United stars - Bon ner, McDonnell and now McGee are with Sligo Rovers, while Dolan and Mannion are to the fore in the Hoops resurgence at the R.D.S. season. Yet Athlone showed signs of hope in their last home performance, with a spirited display yielding a commendable 1 - 1 draw with champions St. Patrick's Athletic. They have some fine performers in custodian Jim Grace, splendid midfield recruit Mark Meagan, and their hometown heroes Denis Clarke and Mick O'Connor. Last Saturday night Athlone travelled to the

UTD m BA AHOE FR LAU H NE I ET TLN O EGE O
Brandywell for their floodlit fixture with Derry City and received a heavy 5 - 0 defeat. Derry's resurgence under lights was far too much for Leech's side, which could not cope with Derry's attacking finesse on the night. United in their game with Shelbourne, showed they can still compete with verve and vigour. This competitiveness is the best possible means to escape from the relegation zone.

Old Rivals Meet At Last
The game everyone ex pected to be the All-Ireland senior hurling final of 1990 takes place in Cusack Park, Ennis on Sunday next. The Oireachtas final of 1990 sees Galway meet old rivals Tipperary, and it will still draw the crowds. Tiperary have started well in the N.H.L. and had an easy win over Dublin in Croke Park last Sunday with all the old nrtfables in action - Bobby'Ryan, Cormac Bonner, Pat Fox, Declan Ryan, John Leahy, Michael Cleary and Declan Carr. The only main absentee was Nicholas English. Cork, of course, upset everyone's expections this year with their All-Ireland double success. They have made an inauspicious start to the current N.H.L. los ing both to Waterford. Tip perary and Galway have been picking up the pieces again. Galway had an easy win over Derry in faraway Celtic Park last Sunday week with a largely ex perimental team. With Galway in Division 11, they should have little dif ficulty in qualifying for the kncokout stages later. On Sunday week they play Laois away which will not be easy. Laois lost to Offaly in Birr last Sunday by 0 -19 to 2 - 8. Then on November 18 Galway are at home to Meath. This is a match the West should win readily. Now with the County final over, a relatively new Galway team is likelytobe selected to face Tipperary, with a number of winning Kiltormer team on board. Some of the old reliables will get a well earned rest. However this match against Tipperary will be Galway's first major game since the All-Ireland final. They should be good enough to win. Archery Action The RTC archery team were in action at Kilcullen, Co. Kildare at the weekend. David O'Sullivan pro duced one of the college's best performance when he came first in the qualifying section with a score of 485. The team is preparing for the Intervarsity tour nament which will be held in Galway on November 17. Teams from Dublin, Limerick and Belfast will be competing.

Galway's junior squash players made history for their club last weekend when they carried off three national titles for the first time. At the Dunlop Irish Junior National squash championships in Dublin's Columbus Club, Connacht players won five of the seven titles available three of which went to Galway Lawn Tennis Club members. Pride of place went to Irish No 1 Ian Thornton in the U-19 A division, while the U-12 boys' title was won by Declan Sharkey, and Roisin O'Muircheartaigh took the girls' U-16 crown. Continuing their dominance of the junior scene this season, local players also won a number of runners-up spots, and attained high place finishes. Thornton, the 18-yearsold engineering student from U.C.G. accounted for his old rival Stevie Richardson from Ulster's

Ian Thornton
Galway players dominated the girls' U-16 event with double honours. Roisin O'Muircheartaigh reached the finals after disposing of fellow Con nacht player Fiona Parker from Sligo with a decisive 3/0 victory. The final between her and clubmate Laura

Mylotte was greatly an ticipated. However Mylotte was unable to play due to illness, and O'Muir cheartaigh took the crown. At U-12 level Declan Sharkey completed Galway's title honours without dropping a single game. In a confident display, he dealt with Dublin's Nigel Peyton to win 9 - 3, 9 -1, 9 - 7. Third place went to Munster's Ross McNamara, who defeated Galway's John Rooney 9 1, 9 - 6, 9 - 6. Sarah Thornton, playing in her first U-19 national competition, defeated the No. 1 seed Louise Finnegan in the semi-finals 3/1, but fell in the final to Dublin's Aideen McNamara 9 - 7, 2 - 9, 9 6, 9 - 0. Connacht players also dominated the Boys' U-14 event with Patrick Quinn and Keith Moran of Sligo taking first and second places, while Galway's

Verve and Vigour
Athlone also have a new manager this season in Mick Leech, who will be disappointed with the Midlanders' start to the John Langan attained the No. 3 position. In the Boys' U-16 B grade, Galway's Eoin Cummins defeated his clubmate Martin Coyne 9 - 5, 9 - 5, 9 - 5 for a high place finish. Sligo's Anna McGeever won the U-14 title to com plete Connacht's five title record when she com prehensively defeated Corks Eleanor Lapthorn 9 - 3, 9 - 0, 9 - 0.