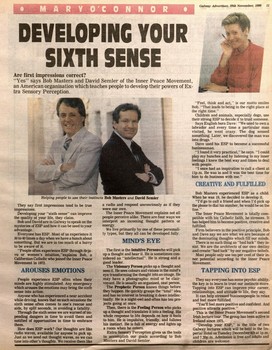 DEVELOPING YOUR SIXTH SENSE
A r e first impressions correct? " Y e s " says Bob Masters a n dD a v i d Semler ofthe Inner Peace Movement, an A m e r i c a n organisation w h i c h teaches people todevelop their p o w e r s of E x tra Sensory Perception.
"Feel, think and act," is our motto smiles Bob. "That leads to being in the right place at the right time." Children and animals, especially dogs, use their strong ESP to decide if to trust someone. Says English born Dave: "We used to own a labrador and every time a particular man visited, he went crazy. The dog sensed something. Later, we discovered the man was into drugs." Dave used his ESP to become a successful businessman. "I found it very practical," he says. "I could play my hunches and by listening to my inner feelings I knew the best way and times to deal with people. "I once had an inspiration to call a client at 11p.m. He was in and it was the best time for him to do business with me."

They say first impressions tend to be true impressions. Developing your "sixth sense" can improve the quality of your life, they claim. Bob and David are in Galway to speak on the mysteries of ESP and how it can be used to your advantage. Everyone has ESP. Most of us experience it 30 to 40 times a day when we have a hunch about something. But we are in too much of a hurry to be aware of it. "People often experience ESP through dejavu or women's intuition,"explains Bob, a Californian Catholic who joined the Inner Peace Movement in 1972.

a radio and respond unconciously as if they were our own. The Inner Peace Movement explains not all people perceive alike. There are four ways we interpret an incoming thought pattern or energy. We live primarily by one of these personali ty types, but they all can be developed fully.

MIND'S E Y E
The first is the Intuitive Personwho will pick up a thought and hear it. He is sometimes con sidered an "intellectual". He is strong and a good leader. The V i s i o n a r y P e r s o n picks up a thought and sees it. He sees colours and visions in the mind's eye transforming the thought into an image. He may have a photographic mind or be clair voyant. He is usually an organised, neat person. The P r o p h e t i c P e r s o n knows things before they happen. He quickly grasps the "total" idea and has no interest in breaking it down intellec tually. He is a night-owl and often has ten pro jects going at once. Then, there is the F e e l i n g P e r s o n who picks up a thought and translates it into a feeling. His whole response to life depends on how it feels to him. He is impulsive, friendly, and follows his instinct. He is full of energy and lights up a room when he enters. Extra Sensory Perception gives us the tools to accomplish our goals according to Bob Masters and David Semler.

Bob Masters experienced ESP as a child. When he was 19, he decided to develop it. "I'd go to call a friend and when I'd pick up the phone to dial his number, he would be on the line." The Inner Peace Movement is totally com patible with his Catholic faith, he stresses. It has helped him to become positive, creative and fulfilled. Firm believers in the positive principle, Bob and Dave say we are what we are because of the dominating thoughts which fill our minds. There is no such thing as "bad luck" they in sist. We are the architects of our own destiny and create "bad luck" by our negative beliefs. Most people only use ten per cent of their in ner potential according to the Inner Peace Movement.

AROUSES EMOTIONS
People experience ESP often when their minds are highly stimulated. Any emergency which arouses the emotions may bring the sixth sense into action. Anyone who has experienced a near accident while driving, knows that on such occasions the sixth sense often comes to one's rescue and aids, by split seconds, in avoiding a fatality. Through the sixth sense we are warned of im pending dangers in time to avoid them and notified of opportunities in time to embrace them. How does ESP work? Our thoughts are like radio waves, available for anyone to pick up. Just as we send out thought waves, so we can tune into other's thoughts. We receive them like

TAPPING INTO ESP
They say everyone has some psychic ability, the key is to learn to trust our instincts more. Tapping into ESP can improve your career, relationships, and attitude to life, they say. It can help stressed businesspeople to relax and feel more fulfilled. "You'll feel more positive and confident. And positive attracts positive." This is the mner Peace Movement's second Irish lecture tour. The group has been active in Ireland since 1975. "Develop your ESP," is the title of two Galway lectures which will be held in the Im perial Hotel on Tuesday December 4th at 1p.m. and 7.30p.m. Admission is free and adults and children are welcome.