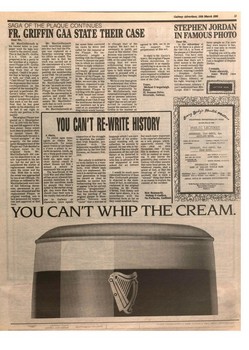 FR. GRIFFIN GAA S A E THEIR C S TT AE
Dear Sir, Mr. MacGiollarnath in his recent letter to your paper went the logn way round to the central issue. This is that the F r . Griffin G.A.A. Club is not prepared to be a party to the erection of a replace ment Plaque to F r . Griffin that would alter the wor ding from t h a t of the original. Could it be possi ble that in having a swipe at both our Club a n d a "Club Oficial" he is under the impression that recent c o r r e s p o n d e n c e on the subject of the missing Pla que and, in particular, Mr. Gavin's letter, were pro mpted by us? We can give him a categorical denial that such is not the case. Now that he h a s gone public on his objections we do feel it our right to clarify our position in the matter. The original Plaque was placed on 2, Mountpelier Tee. in 1970 with the bless ing and full approval of the then owner. Same would have been in position when in r e c e n t t i m e s M r . MacGiollarnath became a "tenant-occupier" of the property. On the subse quent disappearance of the Plaque our Club decided to r e p l a c e s a m e in i t s original form. Mr. MacGiollarnath did con vey his objections to us, as now expressed in his let ter, but for our p a r t we considered the m a t t e r of replacement rested bet ween the owner and the Club. With this in mind, the owner was approached by two of our Officials. Ob jections a s outlined by Mr. MacGiollarnath were rais ed but following discus sion, permission to pro ceed was obtained and the replacement Plaque, on original wording, was in fact presented for inspec tion and approval a t that time Mr. MacGiollarnath reads something sinister into that fact that the Pla que was replaced on a Saturday morning when his Office a s closed. The simple fact is that the work w a s carried out a t the convenience of a very competent voluntary helper who neither holds position nor membership in our Club. On yet another point, or protesting to "another Club Official", Mr. MacGiollarnath feels he was " a s much a s accus e d " of having stolen the Plaque. Our Official fully recalls the conversation in qustion and would like now, a s he did then, to a s s u r e Mr. MacGiollar nath that no such accusa tion was intended. the s a m e time conveyed ly c h a n g e t h a t of the his views by letter and original. We don't feel it necessary to justify our called for the removal of t h e P l a q u e . We im stand in this matter. This mediately sought a decision w a s conveyed to meeting with the Property the owner on August 17th, Owner to discuss our posi 1989, at the s a m e time ad tion to which we received v i s i n g t h a t we w e r e a letter in reply withdraw w i t h d r a w i n g from o u r ing the p e r m i s s i o n position, leaving the way previously granted and open to both tenant and calling for the immediate owner to proceed with a removal of the Plaque. As memorial a s they thought suitable. in Mr. MacGiollarnath's We have now been given letter, we were also, in this instance, requested to con to understand that within sider the erection of a the past few days a Plaque replacement P l a q u e to erected, presumably by wording with the approval Mr. McGiollarnath, was of both tenant and owner. removed overnight by per At a s u b s e q u e n t son or persons unknown. meeting of our Club it was While w e v e r y m u c h the unanimous decision of regret that we a r e not perour m e m b e r s not to pro m i t t e d to c o n t i n u e to honour the memory of F r . ceed on an amended worMr. MacGiollarnath at Griffin in the manner a s ^mg^lud^ould^asical^ agreed in 1970, we in no way support the perpetrators of this act. In reply to Mr. Gavin's query, the original P l a q u e whose mysterious r e appearance is a s equally mystifying to us as was its disappearance, a s is its r e p l a c e m e n t which we were required to withdraw a r e now both in the posses sion of the Club. Yours, Micheal O hegartaigh. Runai, 22, Seaman Drive, Riverside, Galway.

STEPHEN JORDAN IN FAMOUS PHOTO
D e a r Sir, In the Advertiser of 8/3/'90 there is a photo of the Old I.R.A. in front of the plaque at 2 Montpellier T e r r a c e . You have men tioned 4 n a m e s and I wish to state that there a r e 3 other n a m e s in the photo that I would certainly like to be mentioned: directly in front, wearing 3 medals Stephen Jordan, Athenry; direct left - J i m mie Cleary, Athenry; on his right, wearing a hat Gill Morrissey, Athenry. I can't understand how Mrs. Lynge didn't recognize these people a s I'm sure they were known to her, and it was only in recent years they died. Trusting you will be able to facilitate m e and that it won't be too much trouble. I a m a daughter of Stephen Jordan. I remain, Yours sincerely, Anne Walsh (nee Jordan)

A chara, Ta aithne agus m e a s a g a m a r Shean Mac Giollarnath. Ta m e a s a g a m freisin a r a m bpairt a d'imir a athair in iarracht na saoirse, traith, ag a m a thuig gach einne cad a bhi i gceist leis a n iarracht sin, agus nuair a c h u i r daoine cosuil le athair Sheain iad fein i mbaol a mbais le s e a s m a m h leis an gceart. The heartbreak of the Civil War and what follow ed h a s never allowed fairminded historians to ig nore the sacrifices m a d e b y p e o p l e like S e a n ' s father in the earlier strug gle. Any more than they should close their eyes to the reality that not all peo ple in Galway or elsewhere, were openly

YU CN R- R HOY O AT E T S R ' WIE I T
supportive of the struggle to establish the indepen dent Irish Republic, pro claimed with the democratic mandate of the ballot-box by the first Dail Eireann, on J a n u a r y 21st, 1919. But nobody is entitled to re-write history in a man ner that contradicts known facts, even where such facts a r e unpleasant. We owe it to ourselves and the next generation to kepp the record a s clear as possible, no m a t t e r how embarrasing this m a y be or appear to be for current political " p r a g m a t i s t s " . That Sean should suggest that the wording of the original plaque in Montpellier T e r r a c e was " r a c i s t " was a mis-use of language which I a m sure a solicitor of his profes sional standing will, on reflection, be anxious to amend. As one who is ful ly aware of the way simple statements off the cuff can distort or be distorted in cold print, I sympathise with him in advance if h e was misquoted or even a s k e d for a n i n s t a n t comment. I would be much more concerned however if Sean Mac Giollarnath genuine ly objected to the state ment of fact, in cold stone, contained in the original wording. As Mr. P a d d y O'Brien, Tom Kenny and other have shown, it is in a c c o r d a n c e with t h e historical facts a s far a s they could establish them. But much more important is the reported alternative on a new plaque, which, apparently, stated: " H e was shot on 20th November, 1920." At best this is economy of truth, with no context or mean ing. It also leaves the possibility that visitors to Galway will either assume that some local person, for whatever reason, shot a priest of God, or that the s h o o t i n g of c l e r g y o r anybody else is such a " n o r m a l " thing that there is no reason to explain t h e context of the incident.
THURSDAY, 22nd MARCH, 8pm RYAN HOTEL spans INJURIES B C C S AND LF I G AK AE I TN A UU C U E AHD CPNTR P YI T E AY H SO H R P - MR C S E L , M.I.S.C.P. AY O T L O - AL E S E H H M.I.S.C.P. I E N HE A , - C L T E K L E E , M.I.S.C.P. OET ELHR INFORMATION CENTRE BANK OF IRELAND MOBILE BANK EYRE SQUARE