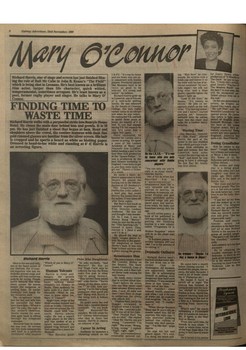 Richard Harris, star of stage and screen has just finished film ing the role of Bull Me Cabe in John B. Keane's " T h e F i e l d " which is being shot in Leenane. He's best known as a brilliant f i l m actor, larger than life character, quick witted, temperamental, sometimes arrogant. He's least known as a poet, former rugby player and singer. He talks to M a r y O Connor.

Richard Harris walks with a purposeful stride into Renvyle House Hotel. He closes the main door behind him and growls. It is 10 p m . He has just finished a shoot that began at 6 a m Head and shoulders above the crowd, the sombre features with their fine gold rimmed glasses are familiar from the silver screen. His hair is cropped and he sports a beard as white as blotting paper. Dressed in head-to-toe white and standing at 6' 4" H a r r i s is an arresting figure.

I.R.F.U. "It's run by bums and ass holes who are on ly concerned with Dublin players. Provincial players like Mannion have to be twice as good to be selected. It's wrong and unfair" he bellows. Richard Harris grew up in Limerick, one of five son of a well-to-do milling family. He was educated by the Jesuits at Crescent College. His own rugby career came to an abrupt end when he was twenty. He contracted T.B. and had to spend three years at home, six months of it in bed. It was bad enough having T.B but worse to be told he'd never kick a rugby ball again. Once recovered, he headed for London and a career in acting. He spent a year at the London Academy of Music and Dramatic Arts (LAMDA) before landing a part in the first West End production of the "Quare Fellow." "It was a production by the best theatre workshop in England. I was lucky to get in and they were lucky to get me." There's a flicker of a smile. ^ He made a short, ex plosive appearance in Irish theatre. He played the leading role in the 1959 pro duction of J.P. Donleavy's "The Gingerman" in Dublin.One critic called it a lewd play that would destroy the moral fibre of the nation. It was taken off after three nights. But Harris had made an indelible impression on Film Director, Lindsay Anderson. "He saw me and thought I was wonder ful. So I was. I was in Hawaii doing "Mutiny" when he sent me the script for "This Sporting Life. I turned it down. They rewrote it. I liked it and said I'd do it." He played the lead as rugby League player Ar thur Machin in the power ful adaptation of David Storey's book. It won him huge critical acclaim and a place among the greats.

ing. "Wait here" he com mands. He returns with a fresh cup and leaves it on the table with his box of ar tificial sweetener (he can't take sugar) ten silk cut king size, and a blue plastic cigarette lighter. He doesn't light up. "Look at the time," he booms. "It's twenty to eleven." He jabs an im aginary watch on his left wrist. "I'm leaving tomor row and I haven't started packing yet." Dramatic outburst over, he settles back into his chair and talks for a further thirty minutes.

Wasting Time
Jim Sheridan, Director of "The Field" offered Harris the part of the priest in the star studded film which portrays tradi tional Irish attitudes to land and women. But the Limerick born actor wanted the starring role of "Bull" and knew he was going to have it although the late Ray Mc Anally was first choice.

for Garry Hynes whose production of "A Whistle In The Dark" he saw in Lon don. "I think she's awfully good Druid's "Playboy Of The Western World" was the best I've ever seen. She will be recognised yet. Talent always wins out in the end." On the new generation of actors, he singles out Daniel Day Lewis, star of "My Left Foot" and "My Beautiful Launderette" for special praise. He claims Day Lewis is light years ahead of English actor, Kenneth Branagh. "He's the best of the young English actors. He's ge nuinely wonderful. Young actors are very sparse in England. America has quite a lot - Sean Perm etc."

Doting Grandfather
Will he return to live here? "I might. Maybe I'd buy a house and some land in Mayo. I like it there " His home is in the Bahamas and is worth six million dollars. The screen and stage star is a doting grand father. His eldest son's first daughter was born six weeks ago. She's called Ella and is the apple of Harris' eye. "Her mum and dad are beautiful people. They live in L.A. but were in London the week before last. I went over to see the baby. She's lovely. "I put her on my knee and she looked up at me and said "I'm delighted you are my grandfather, Richard Harris." He cat ches my amused expres sion and grins "She has impeccable taste." Famous and nearly famous actors rub shoulders in the hotel foyer and all at once Richard Harris is the nucleus of a group of excited people. "The party's off, the pub is too crowded." someone calls. And suddenly he's not here anymore. He is climbing the wooden staircase to his bedroom. In there he wiU pack all his belongings and sit in the velvety silence, learning his lines from his Walkman. Like he does most nights.

Witt
"You can only say you're right in so many words" chortles Harris. One of his ex wives has described him as a"Quintessential Renaissance man."He is very versatile and has starred in movies, on Broadway in musicals, col lected Emmys and gold discs, published poetry, recorded songs and pro duced plays and movies. Even today, his looks and boundless energy defy his age. He still writes poetry. A book of his published in 1972 was a best seller. He is putting the finishing touches to a new volume called "Fragments Of A Broken Snapshot" which will be in the shops next Spring. "It features poems I've written between 1977 and 1988. I'm in the process of re editing it."

Dramatic Outburst
Richard Harris hasn't touched alcohol since 1981. His last drink was in the Jockey Club in Washington. All excesses are apparently behind him. He is submerging himself in nothing more dangerous than hard work nowadays. "I was anointed three or four times," he says, out of the blue. He wouldn't class himself health conscious and when I ask if he jogs or works out, he explodes with laughter. "Oh, no" he assures m e "I couldn't bear it" "When George Bernard Shaw was 90 years old, so meone asked him did he exercise. His reply was "I take exercise walking behind the coffins of friends who died exercis ing." "I'm like that" quips Harris. He sips his tea and growls again. "It's cold, I'm doing too much talk

Rtchonf Hofrts
Here is the one and only, one of the finest actors of our lifetime, the 57-yearold supremo who has for decades graced stage and screen and won numerous awards for acting. People hurry towaids him from every corner. He moves before the hedgerow of smiling faces. He smiles fleetingly and heads for the reception desk. The receptionist hands him his key and teus him the journalist has been here since 8pm. "Where is she? "he asks. She nods in this writer's direction. Harris cranes his neck, then goes back to sifting through his telephone "Which of you is Mary O' Connor?

it Mtyt'.
He came here a month before filming started. "I studied the people, the ac cents, the land, the pubs. I read a lot of books about the O' Flahertys etc." He found it hard to switch off at night. The filming has finished in Leenane now and the loca tion shifted to Ardmore Studios in Bray. Harris has enjoyed working here but says coming to the end of a film is a tremendously exciting time Satisfying too. What's next? He starts rehearsing a Pirrendello play in London on January 8th. It opens in the West End in March. From now until then, he intends to laze about. "I want to waste time, we're all too busy those days. I'm going to find time to waste time" He is lavish in his praise

Moments later be makes his way over. He surveys my two male companions and land in a perfectly modulated voice inquires

like Camelot, Mutiny on "he asks excitedly. "And the Bounty, The Snow Moylett? He has no Goose, Cromwell, Guns of fire"Hugh Coyle says he Navarone, and A Man Call admires the way the Kiwis H u m a n Volcano ed Horse rank among his move five men in when Harris is tired and best known. they're going forward. hungry. He prowls He reads every review "They haven't been tested possessively around the that is written about him. yet" adds Harris. "You're foyer, talking about "Don't believe the actors taking all this down, aren't Ireland's 2-0 victory in who say they never read you ? " he asks, eyes nar Malta. Then suddenly he rowing. I write like a thing their reviews. Every actor halts, pulls in a chair and possessed. How could you does. I save all mine and demands "What do you not? Being with Harris is - then I read them on stage want to know about me, like being with a human to embarrass the critics Mary O' Connor?" volcano. who attack m e Hugh Coy le owner of the "Pauline Kael. one of the He pours some tea and Hotel excuses himself and biggest reviewers in bites into a toasted cheese joins us briefly. Conversa England wrote a review I sandwich. "Do you knowtion centres around the All Noel Mannion? '