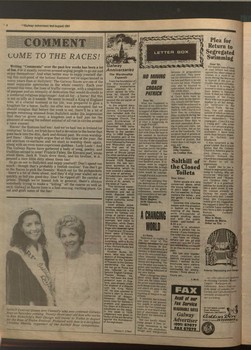 Plea for Return to Segregated Swimming
Dear Sir, The hostile tone of many of your letters last week against my observations of women in a state of un dress during the heatwave is typical of the new at titudes that prevail today. I think it is wrong for women to show so much of their bodies in Summer time. It does not follow the example of the Virgin Mary who was so pure and modest in all her doings. All believers in the Catholic Faith - the one, holy, true and apostolic outside of which no one can be saved - should protest at this immodesty. The young girl -1 take it it was a young girl - who wrote that I was afraid of glimp sing a woman's breast is mistaken. I have seen more than breasts expos ed in Salthill and Blackrock. I was surprised at the priest's letter. But it is well known that the Catholic Church in America goes its own liberal way. In Catholic Ireland the Church has remained loyal to Rome in all its aspirations. I would like to see a return to segregated swim ming in Galway. Why not revive the "Men Only" at Blackrock and "Women and Children Only" at Salthill? It is a practical solution for those of us who like a quiet swim. It was the custom already in Galway for years and worked very well. I would hope the Corporation would give my suggestion the support it deserves. As a Catholic Local Authority they have a duty to uphold Roman Catholic standards.
Mise le M e a s , Seamus de Burca.

Writing "Comments" over the past few weeks has been a lot Galway of fun. For it mostly revolves around urging people to go out and Anniversaries enjoy themselves! And what better way to enjoy yourself dur The Wardenship Expands ing this mid-point of the hottest Summer we've experienced in From the foundation of many years than at Ballybrit! The Galway Races are one of the he W most enjoyable spectacles in the whole country. Each year ' tGalway a r d e n s h i p of endowments around this time, the lines of traffic converge, with a singleness w e r e attached to it of purpose and an intensity of dedication that would do credit to which spread its influ beyond the a medieval religious pilgrimage! And all for...a horse! But this ence far the city and walls of is not as silly as it sounds. We seem to recall a King of England beyond the old parish of who, at a crucial moment in his life, was prepared to give a St. Nicholas. In the original docu kingdom for a horse. Sadly, his offer was not accepted, but we ments should imagine that before the week is out, there'll be a lot of J a m e s ,theC lparisha lof aSt, areg w y people returning stunned from Ballybrit under the impression w a s included with the that they've given away a kingdom and a half just for the n e w l y e s t a b l i s h e d Collegiate Church. The pleasure of seeing the noblest animal of all run in circles around n e x t A r c h b i s h o p of Tuam, William Joyce, in a race course! December 1485 trans Races! the Romans had'em! And we've had 'em in Ireland for ferred Oranmore and centuries! In fact, we Irish have had a devotion to the horse that Maree to the wardenship. In 1488 Oughtergoes back into the dim, dark and distant past. We even worship ard became part of the ped them! (Many might argue that at this time of the year, the new jurisdiction and w a s old atavism re-surfaces and we start to worship them again, soon followed by Rahoon and Moycullen in along with an even more capricious goddess - Lady Luck!) And the first year and the of The Galway Races have gathered a body of song, poetry, and sixteenth century the tradition second to none! Francis Fahey, the Kinvara poet, wrote parish of Shrule joined the other parishes of the about them. Jack B. Yeats drew them, and his brother, W.B., Collegiate arrangement. Around 1526 Roscam penned a nice little ditty about them too! became the last So go on out to Ballybrit and enjoy yourself! Don't spend too torial accretion toterri the much - though that's probably a foolish caution! You don't go Wardenship which by to the Races to pick the flowers! Watch out for the pickpockets now covered a substan of - there's a lot of them about, and they'd slip your wallet out as tial area also parishes. It included since 1491 quickly as bid you good-day. Don't be ripped off! Be careful of S k r y n e , an a n c i e n t prices. Though we're honest folk in general, there's always shrine of St. Jarlath, in somebody trying to make a "killing" off the course as well as the town of Tuam. This territorial expan on it. Galway at Races time is a fast-moving, exciting place. Go sion met with some out and grab some of the fun! resistance and led to
some disputes which ended in appeals to higher authority, some times to Rome. Local priests, some times members of ruling families, objected to the control by Galway city clergy of certain areas. Maurice O'Flaherty, for example, laid claim to Moycullen, while O w e n O'Flaherty w a s one of those who asserted rights in Oughterard. Of course there w e r e O'Flaherty s t r o n g h o l d s in b o t h p a r i s h e s . It is not surprising, with a Burke castle at Oranmore, that a Rev. Richard Burke laid a claim there. Another Burke, Ed ward, w h o w a s Arch deacon of Annaghdown, objected to the transfer of Roscam to the Galway wardenship. His claim did not g o to Rome but w a s referred to the famous English Cardinal, Thomas Wolsey. He, who had been the most powerful man in Eng land, w a s already under the shadow of a dispute with his; King, Henry VIII. He w a s opposed to Henry's plan to divorce Catherine of Aragon However. W o l s e y had some time for Galway's problem and appointed the Dean of Kilfenora to adjudicate on the issue In this w e e k in 1529 judgement w a s given in favour of the wardenship against the Archdeacon of Annaghdown.

CROAGH PATRICK
Dear Sir, What has happened to the soul of our nation that there is not a public outcry in support of those who are working tirelessly and voluntarily to create an awareness of the gravity of what is happening on Croagh Patrick? Burmin Exploration have built a track several feet wide from the base to the summit to facilitate their prospecting for gold. Can any of the arguments put forward for short-term gain or temporary job creation justify the poten tial destruction of this sacred mountain? It has been a spiritual site for Irish people for the last fif teen hundred years. If so meone were to suggest melting down the Ardagh Chalice to extract its gold there would be outrage. Croagh Patrick is an even greater treasure. Let's hope and pray that the destruction of Croagh Patrick will not remain an indictment of the greed, callousness, insensitivity and cowardice of our age.
Yours sincerely, Marie Hughes. 19/20 Chancery St., Dublin 7.

because ot pregnancies and abortion. They know not the difference until it's too late and there is no one to care for them. Parents may also be blamed to some extent, but this is not the whole story. I think that the teachings of Christ have been ig nored, both by the hierar chy, schools and the home. More could be achieved in dealing with present-day youth by both Church and State than by criticising dress standards during the current hot Spell. It is not uncommon these days to see such immodest dress ing in pubs and clubs, not alone in cities, but as far out as the Gaeltacht. Yet we never hear of priests or their parishioners voicing one word of protest. But where does it all begin, we may ask?
Mise le Meas, John Couaines. An Ceathar Rua.

Salthill of the Closed Toilets
Dear Editor, S o m e people are very concerned about w h a t the young ladies w e a r or don't w e a r - during the hot weather. In t h e s e matters the ladies - and the gents - have a free choice. Contrast this infantile debate with the situation in Salthill on the first evening of the Races, with t h o u s a n d s of people strolling about and with the public toilets pad-locked at 8.30 p.m. Here is a situation w h e r e a person has no choice - if you must g o to the toilet y o u ' v e g o t to g o - you have no choice. W h e r e can you g o and waht can you do? If only you w e r e a d o g you could do as they do and use the path. W e talk and bladder about tourism and Salthill, the great tourist resort. I wonder do the brochures warn visitors to b r i n g t h e i r o w n c o m m o d e s for e m e r g encies I Think about i t ! Yours, etc., C.McG.

against Seamus de Burca's letter on standards of decency in dress reminded me of my own school days, when immoral dressing meant something scan dalous and degrading. The way the point was made by priest and teachers often left us feeling ashamed of our own bodies. What a change has taken place since those days'. Gone are the times when the priest would denounce such things from the altar, and above all, gone is the catechism and the teaching of religion in our schools. It interests me to know how many of our present day pupils in school can repeat the Ten Command ments, or ever heard of the law of abstinance, much less know the meaning of the Rosary. One can hardly blame young people if they in dulge themselves in the high life, sex, alcoholism, drugs and emigration

Interior Decorating and Design.
...we offer advice and guidance in choosing Curtains /Blinds ' Carpets / Wallpapers or Upholstery. Select from our wide range of samples. All Curtain and Upholstery, work carefully produced by our workshop.