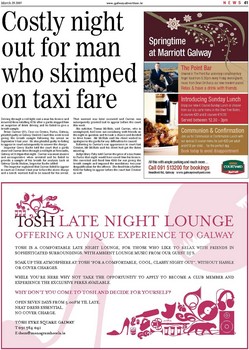 Costly night out for man who skimped on taxi fare
Driving through a red light cost a man his licence and incurred fines totalling 750 after a garda stopped him on suspicion of drink driving and he failed to give a breath sample. Brian Curran (37), Cnoc na Greine, Furbo, Galway, pleaded guilty at Galway District Court this week to not giving the breath sample following his arrest on September 9 last year. He also pleaded guilty to failing to appear in court subsequently to answer the charge. Inspector Gerry Roche told the court that a garda observed Curran drive through a red light at Newcastle, Galway at 10.50pm that night. Curran was most abusive and uncooperative when arrested and he failed to provide a sample of his breath for analysis back at Galway Garda Station, Inspector Roche added. The inspector explained that Curran failed to appear in court on October 2 last year to face the above charge and a bench warrant had to be issued for his arrest. That warrant was later executed and Curran was subsequently granted bail to appear before the court this week. His solicitor, Tomas McHale, said Curran, who is unemployed, had been out socialising with friends on the night in question and he took a chance and decided to drive home. Mr McHale said his client wished to apologise to the garda for any difficulties he caused. Referring to Curran's non appearance in court last October, Mr McHale said his client had got the dates mixed up. Judge Mary Fahy told Curran the price of a taxi home to Furbo that night would have saved him his licence. She convicted and fined him 500 for not giving the breath sample and imposed the mandatory two-year disqualification for the offence. She fined him a further 250 for failing to appear before the court last October as well.