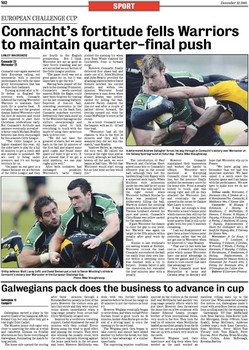 Connacht 22 Worcester 21
Connacht once again answered their European calling, not necessarily with a merited performance, but with the same gritty determination that has become their hallmark. Turning around after a 30 20 defeat in England the previous week, Connacht subdued the visiting Worcester Warriors to maintain their push for a quarter-final. It certainly was not the greatest display. Indeed Worcester ruled the first 30 minutes and could have expected to start their Christmas celebrations early. But Connacht's fortitude and patience eventually prevailed a factor coach Michael Bradley believes has been encouraged by this season's Celtic League. "The Celtic League is a higher standard this year. All the sides have to play for a full 80 minutes to get a result and any mistake is punished. We are used to being under pressure, and it's not foreign territory for us. "On paper no one gave us a chance because we are bottom of the Celtic League and they

are fourth in the English premiership. But I think Worcester are not as good as their fourth standing and we are not as bad as our bottom of the Celtic League position. "The game itself was not a good game for us, but it was important to get the win." Having been played off the park in the opening 30 minutes, Connacht's newly-unveiled mascot, Eddy the Eagle, could have been forgiven for tearing out his last remaining feathers. Deprived of line-out ball, conceding possession in the scrum, and on the back foot, Connacht somehow survived. Defensively their pack stood up to the Worcester barrage as the visitors unsurprisingly and repeatedly opted to kick everything to touch with the hopes of using their notorious pack to drive over. "We did not have the greatest of starts, but we came back in the last 10 minutes of the first half and played some good rugby and found some space out wide to get a try. It just showed that if we get a solid platform, we can play rugby quite well." After both outhalves had exchanged penalties, Worcester's tactic finally

yielded the opening try when prop Tony Windo claimed the touchdown from a forward surge. However Connacht finally delivered first phase ball and made use of it. John Muldoon and John Hearty provided the attacking platform before David Slemen notched his second penalty, and within two minutes Worcester found themselves a man down when Shane Drahm was yellowcarded for killing the ball. Andrew Farley claimed the line-out and after a couple of patient drives forward, the overlap opened out wide for Conor McPhillips to score in the corner. As a result Connacht were the happier with an 11 - 10 half time lead. "Worcester had all the chances to win in the first 30 minutes and they will be annoyed they did not win this match," says Bradley. "Andrew Farley, as captain, did very well. He rallied the troops at the right time, and as a result, although we had been beaten off the park, we were happy at half time. We felt that Worcester would start strong but as time went on they would tire."

A determined Andrew Gallagher forces his way through in Connacht's victory over Worcester at the Galway Sportsground on Saturday. Photo: Mike Shaughnessy

The introduction of Paul Warwick and Christian Short added some bite to Connacht's offensive play in the second half, although they lost the hardworking Colm Rigney with a suspected neck injury. When Muldoon stole possession inside his own half he set up an attack that was only halted in the right corner when Worcester fullback Nicolas Le Roux was penalised for deliberately killing the ball. Warwick kicked the resulting penalty, but a minute later after Thomas Lombard showed his pace and power, Connacht's Chris Keane was yellow carded for the same offence. It gave Worcester the chance to close the gap to one point, but Warwick was again on target in the 57th minute with a penalty after good work by Short. Similar to last weekend's see-sawing drama at Sixways, Worcester re-took the lead. Connacht surrendered the ball too easily from their own lineout before a sweeping move was finished with a try to Delport. Drahm failed to add the conversion but extended the lead minutes later with a penalty.

However Connacht maintained their momentum and worked the harder in offence. Worcester were excellent at disrupting Connacht close to their own line, but the pressure finally yielded the necessary score for the home side. From a penalty kicked to touch, play was swung right and left as they attacked the Worcester line, and eventually the space opened in the corner for flanker Matt Lacey to score. It was not enough to deny Worcester a loser's bonus point which ensures they still top the group by a single point, but the home quarter-final is still up for grabs with two pool 5 matches remaining. " I am not disappointed we gave them a loser's bonus point yesterday rather that we did not get one in Worcester when we deserved it," says Bradley. " That one try last week has cost us - it denied us the bonus point which means Worcester have one-point advantage in these two games, and if it came down to tries scored that have that advantage too." Now Connacht must beat Montpellier at home and Catania away in January and

Galwegians pack does the business to advance in cup
Galwegians 13 Cashgel 9
Galwegians earned a place in the quarter-finals of the inaugural AIB AllIreland Cup, but only after they got a real fright from Cashel. The Munster junior club came very close to upsetting the odds at a wind and rainswept Glenina on Sunday afternoon as they threw everything at Galwegians, dominating the match for long periods. The home side opened the scoring after three minutes through a Brendan Bartley penalty in front of the posts. However the visitors soon got into their stride and they were on level terms almost immediately when a long-range penalty from scrum-half Oliver McGlinchy scraped over. Inspired by a vociferous travelling support, Cashel dominated the next 20 minutes with their outhalf Trevor Breen using the wind to good effect and pinning the corners. They were also winning the penalty count, with the referee regularly blowing against the home pack both in the set-piece and loose. However McGlinchy was wide with two further kickable penalties before he found his range on 15 minutes to put the visitors in front 6-3. However Wegians eventually began to settle down, and when outhalf Peter Durkan found a good touch on 26 minutes, hooker John Burke got on the end of a driving maul to score the opening try for an 8-6 lead. The Wegians pack then began to take control and should have added another try before the break, but they failed to take advantage of a similar opportunity. The improving weather conditions spurred on the visitors in the second half and McGlinchy had another two long-range penalty efforts which fell just short. However they threatened the home line on a few occasions with flanker Edmond Leamy, younger brother of Irish international Denis, very much to the fore. They took the lead on 65 minutes when McGlinchy landed an excellent penalty from the 10 metre line, and so a grandstand finish was set up with a shock very much on the cards. However Wegians used their experience and dug deep when they needed as the pack worked an excellent rolling maul up to the visitors' line. When awarded a penalty five metres out, Galwegians made it count with prop Ross Davies crossing from a rolling maul for the winning try. Galwegians XV: Dan McFarland (sub: Ross Davies), John Burke (sub: Joe Merrigan), Denis O'Brien, Liam Scahill, Brian McClearn, Ambrose Conboy (capt.) (sub: Liam Casserly), Ivan Muldoon, Steve Miller, Tom Tierney (sub: Tom Ellard), Peter Durcan, Peter Phelan, Brian Murphy, John Culkin, John McDonagh, Brendan Bartley.