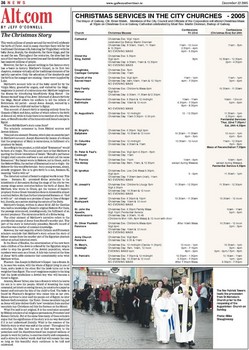 The Christmas Story
This week millions of people around the world will celebrate the birth of Christ. And in many churches there will be the traditional Christmas crib, featuring the Virgin Mary with the baby Jesus, Joseph, the shepherds, the three kings, and the ox and the ass. Throughout the centuries, the idea that the son of God was born to the powerless and the disenfranchised has inspired millions of people. However, the fact is, almost nothing in this famous story has a basis in history. Matthew's Gospel, in its first two chapters, contains virtually all the traditional elements of the nativity narrative. Only the adoration of the shepherds and the birth in the manger are missing - these were supplied by Luke. Matthew's account tells us of the baby cared for by the Virgin Mary, greeted by angels, and visited by the Magi magicians in pursuit of a miraculous star. Matthew heightens the drama by introducing bloodthirsty King Herod - the Roman-backed 'king of the Jews'. Informed of Jesus's birth by the Magi, Herod orders his soldiers to kill the infants of Bethlehem. All perish - except Jesus. Joseph, warned by a dream, takes the child and mother to Egypt. This account of Jesus's birth is missing entirely from the Gospels of Mark and John, neither of which refers to the birth of Jesus at all, while in Luke there is no mention of a star, wise men, or Herod's murder of the innocents and Jesus's escape to Egypt. Where did Matthew's story come from? The scholarly consensus is, from Biblical sources and Jewish folklore. Take just one element: Dreams, which play an essential part in Matthew's account. Joseph discovers by means of a dream that the pregnancy of Mary is miraculous, in fulfilment of a prophecy by Isaiah. According to the prophet, a child called "Emmanuel" would be born of a virgin. The crucial point here is that Matthew is quoting the Greek translation of Isaiah: "Behold a parthenos [virgin] shall conceive and bear a son and shall call his name Emmanuel." But Isaiah wrote in Hebrew, not in Greek, and in the Hebrew Bible, the mother of Emmanuel is not a virgin - the Hebrew for this would be betulah - but a young woman, almah, already pregnant. She is to give birth to a son, Immanu El, meaning "God is with us" The historical context of Isaiah's original words is key: This name - Immanu El - promised divine protection to the inhabitants of Jerusalem during the siege of the city by two enemy kings seven centuries before the birth of Jesus. But Matthew, who wrote in Greek, got his version of Isaiah's prophecy from a Greek translation done in Alexandria almost a century before. He then further interpreted Immanu el - 'God is with us" - not simply as a promise of hope in time of danger but, literally, as a person sharing the nature of the Deity. Matthew's Gospel, written in about 80-90 AD for Gentiles who had no knowledge of Isaiah's original Hebrew. For them, the passage announced, unambiguously, the fulfilment of an ancient prophecy: The miraculous birth of a divine being. The other element of Matthew's narrative refers to the providential escape of Jesus from Herod's murder plot. This part of the story is historically plausible; Herod's record of atrocities was a matter of common knowledge. However, the vast majority of both Catholic and Protestant scholars conclude that Matthew's story echoes the story of Moses' escape from the murder plot of the Egyptian pharaoh rather an actual historical event. In the Book of Exodus, the extermination of the new-born male children of the Jews is ordered by the Egyptian king in order to stop the growth of the Jewish population, whose numbers were seen as a threat. A folk-tale current at the time of Jesus' birth adds elements that unmistakably echo what Matthew writes. Pharaoh - like Joseph in Matthew's Gospel - has a dream. In it, he sees two scales, with the whole of Egypt lying in one of them, and a lamb in the other. But the lamb turns out to be weightier than Egypt. The court magicians explain to the king that the lamb symbolises a Jewish boy who will become a threat to Egypt. Amram, Moses' father, also has a dream in which he learns his son is to save his people. Afraid of breaking the royal command, yet intent on saving his son, he constructs a papyrus basket and entrusts the fate of the child to God. The baby is found by Pharaoh's daughter who raises him as her own. Moses survives to later lead his people out of Egypt; he later delivers God's revelation - the Torah - from a mountain-top, just as Jesus will later deliver God's 'new' revelation from another mountain-top: Christians call this the Sermon on the Mount. What I've said is not original. It is the conclusion accepted by Biblical scholars of all religious persuasions, Protestant and Roman Catholic. But at the same time many of these scholars argue that the significance of the story is in no way destroyed if it is not understood literally. What is the essence of the Nativity story is what was said at the outset - Throughout the centuries, the idea that the son of God was born to the powerless and the disenfranchised has inspired millions of people to work for justice, to exercise charity and compassion, and to strive for a better world. And that will remain the case so long as this beautiful story continues to be told and celebrated.

10am - 6pm except during Masses

The Rev Patrick Towers leads the procession from St Nicholas's Church prior to the reopening of the Augustinian Church on Sunday. Photo:-Mike Shaughnessy