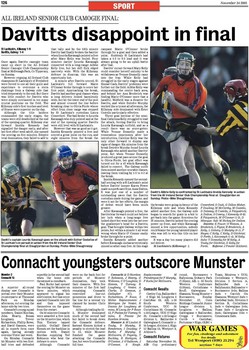 Davitts disappoint in final
St Lachtain's, Kilkenny 1-9 Davitts, Galway 1-4
Once again Davitts camogie team came up short in the All Ireland Senior Camogie Club Championship final at McDonagh Park, Co Tipperary, on Sunday. However reigning All Ireland Club champions St Lachtain's of Freshford were forced to use all their guile and experience to overcome a stern challenge from a Galway side that tried desperately to the end. But there was little comfort for Davitts who were simply outclassed in too many crucial positions on the field. The Kilkenny side's first touches and level of fitness were superior on the day. Although the title holders commanded the early stages, the teams were still deadlocked at the end of the opening quarter. Kilkenny star forward Imelda Kennedy had signalled the danger early, and after her first effort went adrift, she opened the scoring on five minutes. Despite total domination, they failed to add to that tally and by the 10th minute Davitts had finally broken the barrier when Lourda Kavanagh pointed a free after Mary Kelly was fouled. Four minutes earlier Lourda Kavanagh connected with a long-range Ailbhe Kelly free, but her deft flick edged narrowly wide. With the Kilkenny defence in disarray, this was an opportunity lost. A minute after Davitts scored, St Lachtain's full forward Marie O'Connor broke through to score her first point. Approaching the break, Davitts had another goal chance when a long delivery looked harmlessly wide, but hit the lower end of the post and almost crossed the line before breaking clear to Olivia Forde whose effort from close range was stopped by St Lachtain's custodian Laura Comerford. The ball broke to Lourda Kavanagh who duly pointed and at the end of the opening quarter Davitts were still level with St Lachtain's. However that was as good as it got. Imelda Kennedy pointed a free and scored a great point on the run, and eight minutes from the break the rampant Marie O'Connor broke through for a goal and then added a point. Suddenly St Lachtain's had taken a 1-5 to 0-2 lead and it was always going to be an uphill battle after that. Davitts' corner forward Mary Kelly could consider herself unlucky to be withdrawn as Yvonne Donnelly came into the fray. While Kelly had struggled in the early stages against Sinead Cash, Davitts' problems were further out the field. Ailbhe Kelly was commanding the centre back area, and behind her Ann Broderick was finding Marie O'Connor more that a handful. Midfield was a disaster for Davitts, and while Deirdre Murphy worked like a tyrant all afternoon, the Kilkenny side dominated with Ester Costello particularly effective. Three goal heroine of the semifinal Cathriona Kelly struggled to lead the attack, forcing Davitts to bring Lourda Kavanagh outfield, and as a result there was no score-getter. While Yvonne Donnelly made a tremendous impression after her introduction, Caroline Kelly was the only other forward to display any signs of danger. Six minutes from the break Deirdre Murphy found Lourda Kavanagh who added another Davitts' point, but when Yvonne Donnelly produced a great pass across the goal to Olivia Forde, her goal effort was turned out for a 45 which Kavanagh failed to convert. The Galway outfit then missed another scorable chance, leaving them trailing by 1-5 to 0-3 at the break. Imelda Kennedy opened the secondhalf scoring with a St Lachtain's point before Davitts' keeper Karen Power made a superb save from Anne Dalton. It was just one of a number of Davitt's Ailbhe Kelly is confronted by St Lachtains Imelda Kennedy in action outstanding saves that the Davitts from the All Ireland Senior Club Championship Final at Cloughjordan on custodian made during the game, and Sunday. Photo:-Mike Shaughnessy. were it not for her efforts, the margin of defeat would have been much the breaks were going in favour of the Comerford; S Cash, G Dillon-Maher, Kilkenny side and when Kennedy F Dowling; M McCarthy, M Costello, greater. After Kavanagh pointed a free, the added another free, the Galway side D Delaney; E Costello, A Fitzpatrick; Davitts'star forward could not believe began to search for goals in a bid to A Dalton, S Conroy, I Kennedy (0-6); her luck when a long-range free get back into the game. Scoreless for E Fitzpatrick, M O'Connor (1-3), D looked short but went into the net over 25 minutes, Davitts lacked the scoring Minogue. Sub: M Hickey for Dalton. Davitts: K Power; O Watson, A the goalkeeper's head for a Davitts; power up front, and while Kavanagh goal. That brought Galway within two missed a few opportunities, nobody Broderick, L Flynn; R Broderick, A points, but within a minute it all went could blame the young talented player Kelly, L Gohery; D Murphy (0-1), P wrong when Marie O' Connor easily who was left to win this title on her Hayes; C Kelly, C Kelly, D Gilchrist; O Forde, L Kavanagh (1-4), M Kelly. own. broke through for a point. It was a day too many players did Subs: Y Donnelly for M Kelly, A Imelda Kennedy added another Touhy for Gilchrist, D Kelly for before Kavanagh uncharacteristically not deliver. Forde. Referee: J Pender (Kildare). St Lachtain's (Kilkenny): L missed a rather easy free. At this stage

Davitt's captain Lourda Kavanagh goes on the attack with Esther Costelloe of St Lachtain's in persuit in action from the All Ireland Senior Club Championship final at Cloughjordan on Sunday. Photo:-Mike Shaughnessy

Connacht youngsters outscore Munster
Munster 3 Connacht 15
A superior all-round display saw Connacht A prevail over their Munster counterparts at Thomond Park on Monday afternoon, out-scoring the home side by two tries. Connacht's young squad members, Daniel Riordan, John Hearty, Ronan Loughney, Trevor Richardson, Phillip Rowe, and David Gannon, were all in superb form once again, having already overome Ulster last week. On Monday Connacht hit Munster with two firsthalf tries and defended superbly in the second half when the home side threatened a comeback. Paul Burke had opened the scoring for Munster on three minutes, which appeared to signal his side's intent, but that score sparked Connacht into life and they imposed themselves on the game from the restart. On 16 minutes Connacht were awarded a free kick on the 10 metre line, which Tom Tierney tapped quickly. Outhalf David Slemen set the backline in motion with Daniel Riordan supplying Ted Robinson who beat the defence to score. Although Connacht were on the back foot for periods of Munster domination, they took their chances. With five minutes of the first half remaining Connacht controlled line-out possession and drove to the line for a second try claimed by hooker Chris Venter. Although trailing by 12 3, Munster dominated much of the second half but failed to break down the Connacht defence. Instead Slemen kicked a penalty to stretch the lead to 12, while Munster finished the game attacking the Connacht line, but were frustrated by full time. Connacht A: D Riordan; T Robinson, J Hearty, G Williams, C O'Loughlin; D Slemen, T Tierney; R Loughney, C Venter, A Clarke, D Gannon, A Gallagher (C), T Richardson, P Rowe, S Millar. Replacements: J Merrigan for Venter, R Davies for Loughney 40 mins, M Lacey for P Rowe 53, P Phelan for Tierney 75 mins, K Finane for Riordan 50 mins. Munster A: M Lawlor; B Touhy, B Murphy, R Henderson, I Dowling; P Burke, F Murphy; E McGovern, D Fogarty, T Buckley, R Hartigan, S O'Connor, J O'Sullivan, J O'Connor, S Keogh. Replacements: M Prendergast for F Murphy, F Roche for McGovern.