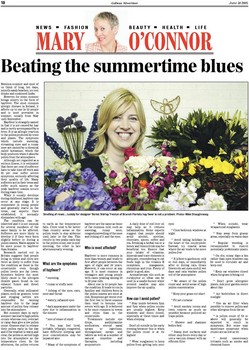 MARY
Mention summer and most of us think of long, hot days, smooth sandy beaches, ice cool drinks and sunkissed limbs. However, for some, summer brings misery in the form of hayfever. The most common allergic disease in Ireland, it affects up to one in 10 people and is most prevalent in summer, usually from May until September. Hayfever is strangely named in that it is not caused by hay and is rarely accompanied by a fever. It is an allergic reaction to the pollen produced by trees and plants. The symptoms which include sneezing, streaming eyes and a runny nose are caused by a chemical called histamine, which the body produces when it absorbs pollen from the atmosphere. Although not regarded as a serious illness, it is estimated that three per cent of sufferers have to take time off work and 22 per cent suffer severe symptoms, seriously affecting their quality of life. Many sufferers are in their teens and suffer much misery as the peak hayfever season occurs during exam time. While it usually develops during childhood, hayfever can occur at any stage. It is commonest in young people and generally starts in the teens, say experts. Once established, it normally diminishes with age. The condition can be inherited and it is not unusual for several members of the same family to be affected. Sufferers are more likely to develop it if they were born slightly before or during a pollen season. Males appear to be more prone to hayfever than females. Research carried out in Britain suggests that people living in towns and cities are twice as likely to suffer from the condition as those in the countryside even though pollen levels are far lower. Scientists believe the most likely cause is the nitrogen dioxide gases found in car exhaust fumes and diesel particles. Generally, wind pollinated plants, such as grasses, trees and stinging nettles are responsible for causing hayfever due to the large amount of pollen they release into the atmosphere. Hot summer days in early summer can lead to high pollen counts whereas cool, overcast or rainy days give a low pollen count. Grasses start to release their pollen early in the day and if the weather is warm and clear, the pollen is carried high into the atmosphere as the temperature rises. In the afternoon, the pollen returns

Smelling of roses ...luckily for designer florist Shirley Treston of Branch Florists hay fever is not a problem. Photo:-Mike Shaughnessy.

to earth as the temperature falls. Cities tend to be hotter than country areas so the pollen tends to stay airborne until later in the day. This results in two peaks each day in the pollen count; one in midmorning, the other in late afternoon/early evening.

hayfever are the same as those of the common cold, such as sneezing, runny nose, congestion/swelling of the nose and itching of it and the eyes.

Who is most affected?
Hayfever is more common in men than women and tends to first affect people between the ages of eight and 20 years. However, it can occur at any age. It is most common in teenagers and young people with cases peaking among 20 to 30-year-olds. About one in 10 people has the condition. It tends to run in families and children born in the pollen season are most at risk. Symptoms get worse over the first two to three seasons then tend to become less severe with age. It is believed to be more common in towns and cities than in the countryside. Treatments include eye drops, antihistamine medication, steroid nasal sprays or injections, decongestant sprays and tablets as well as a number of natural remedies and therapies, including acupuncture.

What are the symptoms of hayfever?
* sneezing * runny or stuffy nose * itching of the eyes, ears, nose and throat * watery, inflamed eyes * dark appearance under the eyes due to inflammation in the sinuses * loss of sense of smell * You may feel tired, irritable, lethargic, congested, have difficulty sleeping and your concentration may be impaired also * Many of the symptoms of

A daily dose of cod liver oil may help as it reduces inflammation. Some experts suggest that people should avoid alcohol, nicotine, chocolate, spices, coffee and tea. Drinking a herbal tea or a honey and lemon drink may be beneficial too. Ensure that your intake of vitamins, minerals and trace elements is adequate, remembering to eat foods high in the vitamin B complexes, manganese, chromium and iron. Plenty of garlic is good, also. Aromatherapy oils such as eucalyptus or olbas can be used in a candle burner while scented candles may also improve the air quality.

eyes * Close bedroom windows at night * Avoid taking holidays in the heart of the countryside. Instead, try coastal areas where the air tends to be more pollen-free * It is best to garden on cold or dull days, or immediately after or during rain. Grass flowers do not open on dull wet days and rain washes pollen out of the atmosphere. * Be aware of the pollen count and avoid areas of high pollen concentration * Keep your grass cut short

* When outside, wear wraparound sunglasses * Stay away from grassy areas, especially on warm days * Regular weeding is recommended to control potentially problematic plants * On dry, sunny days a fan rather than open windows can be used to circulate air and keep cool * Keep car windows closed when the grass is being cut * Don't grow allergenic plants. Ask your garden centre about this * Air bedclothes in direct sunlight * Use an air filter when possible to remove pollen and other allergens from the air * A pollen count of 50 or above will generally be expected to result in symptoms. But some may experience symptoms when counts are as low as 10. * Avoid unnecessary irritants such as smoke and chemical fumes

How can I avoid pollen?
* Stay inside between 5pm and 7pm when pollen counts are usually highest. Keep windows and doors closed, especially at these times and when sleeping Don't sit outside in the early evening because this is when the pollen count is at its highest * Wear sunglasses to keep pollen from getting into your