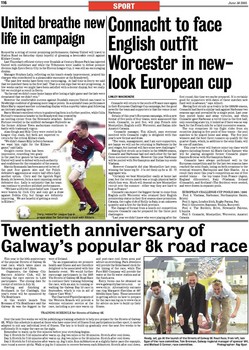 United breathe new Connacht to face life in campaign English outfit
Buoyed by a string of recent promising performances, Galway United will travel to Station Road on Saturday (4pm) hopeful of gleaning a favourable result against Kildare County. Last Thursday's efficient victory over Dundalk at Century Homes Park has injected United with confidence and while the Tribesmen were unable to defeat premier division high flyers Derry City in the Eircom League Cup, it was still an encouraging display. Manager Stephen Lally, reflecting on his team's steady improvement, praised his charges who contributed to a pleasurable encounter at the Brandywell. "The past few weeks have been very encouraging. At half-time in Derry we said that we matched them in the first half. That is a real sign that we are progressing. A few weeks earlier we might have been satisfied with a decent display, but we really felt we could get a result in Derry. "In the end we didn't come home happy after losing a tight game and the lads were devastated that we didn't win." However the comfortable success against Dundalk ensures United can travel to Newbridge confident of gleaning more league points. In a splendid team performance Mixie Harty capped another outstanding display with a superbly taken goal following an intricate passing move. Barry Moran's excellent return to goalscoring form is a further positive, while Colin Fortune's venomous header in the Brandywell was created by an inviting corner from the Newcastle attacker. Indeed, Fortune revelled in the midfield exchanges Foyleside as the former Athlone Town anchorman continues to battle with trademark vigour. Alan Gough and Billy Clery were rested in the League Cup clash, but both are expected to return for the critical Kildare clash. "We didn't chance Billy in Derry because we want him right for the Kildare game," said Lally. Gough's recent form has been impressive, conceding two goals in the past four games he has played. United will need to defend with such authority and confidence for the remainder of the season. Marcin Syzmanski has been assured in two of the past four games also and the Polish defender's aggression at centre half offers Lally another option. Clery and the tigerish Nigel Keady, do however, form a most imposing central defensive duo. Lally is optimistic that his team can continue to produce polished performances. "We have a little bit more belief now. I know we were beaten by Cork City and only got a draw against Dublin City, but things are definitely improving. We are hopeful of getting a result in Kildare."

Worcester in newlook European cup
LINLEY MACKENZIE Connacht will return to the south of France once again in their European Challenge Cup campaign, but the good news for the team and supporters is that the venue is not Narbonne. Details of this year's European campaign, with a new format of five pools of four teams, were announced this week. Connacht, in pool five, will play French side Montpellier, English outfit Worcester, and Italian side Amatori Catania. Connacht manager, Tim Allnutt, says everyone involved with Connacht rugby is delighted with this year's new format and draw. "The team, management, and I am sure supporters, are happy we will not be returning to Narbonne in the pool stages, but instead will face some new challenges." Having first struck up a rivalry in the 1998/99 season, Connacht and Narbonne had met each other for the last three successive seasons. However this year Narbonne will be pooled with Northampton and Italian top seeds Viadana. However Connacht did play Montpellier last year, winning the home leg 56 - 3 to set them up for a 22 - 73 aggregate win. "Certainly we beat Montpellier easily at home last year, but the return match was a tough physical battle which they won. Much will depend on how Montpellier recruit over the summer - either way they are hard to beat in France." Connacht can expect the biggest threat to come from English outfit Worcester who retained their English premiership status in their first season since promotion. Catania, the rugby club of Sicilly in Italy, is an unknown quantity and a first for the Irish province. The change of format from a knock-out competition ensures Connacht can be prepared for the three pool challengers. "Last year we didn't know who were playing after the first round; this time we can be prepared. It is certainly good for supporters with dates of these matches now fixed well in advance," says Allnutt. Having first struck up a rivalry in the 1998/99 season, Connacht had faced a similar task against Narbonne two seasons ago and prevailed by a single point. Last year they posted home and away victories, and when Connacht gave Narbonne a torrid time in the first half, only conceding a late try, it looked as if there was no way back for the French side for a third successive season. The cup comprises 20 top flight clubs from six countries playing in five pools of four teams - the pool matches to be played home and away. The five pool winners and the best three runners-up qualify for the quarter-finals, which, in addition to the semi-finals, will be one-off matches. This year's event will feature some top class world players including former All Black Carlos Spenser who will be playing alongside former Connacht player Damien Browne with Northampton Saints. Connacht have always performed well in the European competition and for the last two seasons have reached the semi-finals, losing on both occasions to the eventual winners, Harlequins and Sale Sharks. As a result they enter this year's competition as one of five seeded teams - the top teams from France (Agen), England (Gloucester), Italy (Viadana), Ireland (Connacht), and Scotland (The Borders) were seeded, and were drawn in separate pools. EUROPEAN CHALLENGE CUP POOLS 2005 / 2006 Pool 1: Viadana, Narbonne, Northampton Saints, Bristol Pool 2: Agen, London Irish, Rugby Parma, Pau Pool 3: Gloucester, Bayonne, Toulon, Bucuresti Pool 4: The Borders, Brive, Newcastle Falcons, L'Aquila Pool 5: Connacht, Montpellier, Worcester, Amatori Catania

Clery, rested for League Cup in preparation for Saturday's clash with Kildare.

Twentieth anniversary of Galway's popular 8k road race
This year is the 20th anniversary of the popular Streets of Galway 8k road race, which takes place on Saturday August 6 at 7.30pm. Organisers, the Galway City Harriers Athletic Club, will be limiting the race entries to 1,400 participants. The closing date for receipt of entries is July 20, Starting and finishing at Southpark in the Claddagh, this year's event will be sponsored by Vhi Healthcare. At this week's launch Tom Brennan of Vhi Healthcare said the Galway 8k was the biggest in the west of Ireland. "As an organisation we promote health and fitness and are therefore delighted to be associated with this fantastic event. We would further encourage participants in the 2005 Vhi Streets of Galway 8K Road Race to continue their training following the race, with an aim to running or walking the Galway Bay 10 race in September, which is run in aid of Cancer Care West." The Chartered Physiotherapists of the Western Branch will provide a welcome volunteer service at the race, including a pre-race warm up and post-race cool down area and advice on stretching. Park Jewellers will provide the Seiko based clock for the timing of the race, while The Pure H2O Company will provide the water at the 5k water station and at the finish area. Entry forms can be obtained on www.galwaycityharriers.com or www.vhi.ie. Alternatively entrants can ring Margaret Sheridan at 087 9234224 (6pm-7pm). Those interested in getting advice on how to prepare for the race can log on to www.vhi.ie for advice on how to build up their fitness.