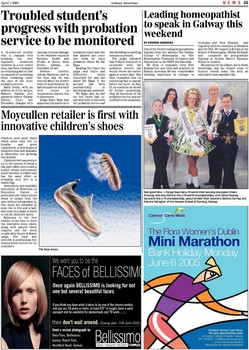 Troubled student's progress with probation service to be monitored
A 21-years-old student who is charged with breaking two very expensive reinforced windows in a city centre shop, has been remanded on continuing bail so that he can avail of counselling while remaining under the care of the court probation service. Rafik Doyle, with an address at 9 Cur na Lus, Rahoon, Galway, first appeared before Galway District Court last December, charged with causing criminal damage to two windows valued at between 6,000 and 7,000, at Boots, Shop Street, Galway, on December 21 last. Defence solicitor Adrian MacLynn said at the time that he was worried about his client's state of mind because he had dropped out of a third level course in computation physics due to depression. Judge Mary Fahy had adjourned the matter for a probation report and this was handed into court this week by court probation officer Mr Pat Egan. Reading the report the judge said Doyle had difficulties which concerned her and she asked Mr Egan if the accused had been psychiatrically or psychologically assessed. Mr Egan said he had not but Doyle had cooperated fully to date with the probation service and was attending counselling sessions at present. The judge indicated that if Doyle continued to co-operate with the probation service she would review the matter again at a later date. She then remanded him on continuing bail to appear before the court on July 11, on condition he attend for further counselling, obey all directions of the probation service, and not reoffend in the meantime.

Leading homeopathist to speak in Galway this weekend
BY KERNAN ANDREWS One of the world's leading homeopathists Alastair Gray will address The Galway College of Homeopathy on `The Homeopathic Treatment of Anxiety and Depression' in the GMIT this Saturday. Mr Gray is originally from New Zealand but now lives and practices in Sydney, Australia. He has considerable teaching experience at colleges in Australia and New Zealand and regularly delivers seminars in Malaysia and the USA. He trained in Britain at the School of Homeopathy (Misha Norland) and completed his post-graduate diploma at Jeremy Sherr's Dynamis School in London. His passion for his subject, his in-depth knowledge, and his wicked sense of humour should make this both an informative and enjoyable day.

Moycullen retailer is first with innovative children's shoes
Children need good shoes which allow their feet to breathe and grow unhindered. A new brand of children's shoe now available in Moycullen lets growing feet breathe. Children's feet can produce up to two spoons of sweat a day, and rubber soles create a humid, sweaty environment inside the shoe. A rubber sole has the same effect as wrapping your feet in a plastic bag. Geox shoes, now available exclusively at Kidsroom in Moycullen, feature a perforated sole which allows sweat to escape from the shoe without letting water in. The shoes are available in sizes two to five and a half, and come in a range of styles to suit all children's tastes. Kidsroom is the first retailer in the west to stock the innovative Geox shoes, along with natural shoes Angulus and the much sought after Stones & Bones range. The shop also provides a professional foot measurement service for its customers.
The Geox shoes

Reel good time -- Fergal Kearney u-14 world Irish dancing champion; Claire Greaney, who was third in the u-15 world championships, and Cathal Keaney, second in the u-13 championship, pictured with their teachers Gemma Carney and Deirdre Gallagher of the Hession School of Dancing, Galway.

The Flora Women's Dublin
We want you to be the

FACES of BELLISSIMO
Once again BELLISSIMO is looking for not one but several beautiful faces
If you think you have what it takes to be one of the chosen models and you are 16 years or older, at least 5'5" in height, have a valid passport and be available for photoshoots and TV work.........