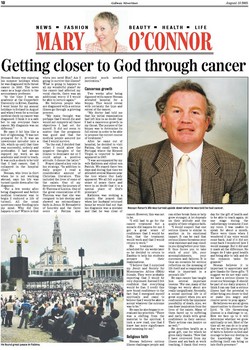 MARY
Nessan Ronan was enjoying his summer holidays when he was diagnosed with throat cancer in 2003. The news came as a huge shock to the accountancy professor. "At the time I was an academic at the Copperbelt University in Kitwe, Zambia. I went home for my annual holidays to Ireland in August and when I went for a routine medical check-up cancer was diagnosed. I think it is a safe bet to say everyone fears cancer. My diagnosis was no different." He says it hit him like a bolt of lightening. "I was not prepared for it. It was an unwelcome intruder into a life, which up until that time was successful, orderly and predicable. I had always enjoyed my work as an academic and loved to teach. It was such a shock to be told that I had cancer, that I collapsed in the hospital clinic." Nessan, who lives in Gort when he is not working abroad, says his life was turned upside down after the diagnosis. "For a few weeks after being diagnosed and before medical treatment was to begin I endured a life of turmoil. All the usual questions came flooding into my mind. Why did this happen to me? Where is God when you need Him? Am I going to survive this illness? What is going to happen to all my wonderful plans? As the cancer had affected my vocal chords, there was an additional worry if I would be able to lecture again." He believes people who are diagnosed with a serious illness go through a grieving process. "My main thought was perhaps that I would die and would not complete all those objectives I had set for myself. It did not seem to matter that the prognosis was good and that the medical people assured me that I would survive. "In the end, I decided that either I could allow the negative thoughts of the illness to dominate me or I could adopt a positive attitude. I choose the latter." Prayer played a key role in his strategy. "In addition to daily prayer I read a considerable amount of Christian literature. This included the lives of some of the saints. One of my favourites was the journey of St Theresa of Lisieux. One of the great consolations of St Theresa was that she was resigned to her destiny and showed an extraordinary faith in Jesus. St Bernadette of Lourdes and the three seers of Fatima also provided much motivation." needed

Getting closer to God through cancer
Cancerous growth
Two weeks after being dignosed with cancer Nessan attended hospital for a biopsy. This would reveal with certainty the type and extent of the cancer. "My doctor had told me that his initial examination had left him in no doubt that I had a cancerous growth in my throat. The purpose of the biopsy was to determine its full extent in order to be able to propose the correct course of treatment." After he came out of hospital, he decided to visit Fatima, the small town in Portugal where the Blessed Virgin is reported to have appeared in 1917. "I was accompanied by my wife Kathleen and eldest son Patrick. We stayed there two days and during that time we attended several Masses near the tree where Our Lady appeared. We all felt a great sense of peace there and were in no doubt that it is a special place of God's presence." Kathleen was seeking a miracle. She prayed that when her husband returned home he would find out that his diagnosis was a mistake and that he was clear of

Nessan Ronan's life was turned upside down when he was told he had cancer.

cancer. However, this was not to be. "I still had to go for the cancer treatment but a miracle did happen for me. I got a great sense of confidence that I would be fine, that the treatment would work and that I would return to work." His treatment was scheduled for six weeks later so he decided to return to Zambia to help his students prepare for their examinations. "I believe that I surprised my Jesuit and Society for Missionaries Africa (SMA) friends. They were probably expecting that I would be very depressed. Instead I felt confident that everything would be fine. I credit this new found confidence to the fact that I energised myself spiritually and came to believe that I would be able to accept whatever the outcome was to be." He says he also began to reevaluate his priorities. "There was a shifting from the material to the spiritual. I took a new road, one that I know has more significance and meaning for me."

can either break them or help grow stronger. A lot depends on their attitude and the quality of their religious faith. "I would suspect that one serious illness is similar to another in its emotional impact. It can be said that serious illness threatens your total existence and may result in you dying before your time. It thus forces you to take stock of your life, your accomplishments, your successes and failures. It is thus an occasion for serious reflection on the meaning of life itself and a reappraisal of what is important in a person's life." He says cancer has taught him several important lessons. "For one, many of the things we worry about are really insignificant. Secondly, a sound spiritual life is of great support when you are confronted with the imminent possibility of death. Also, we can draw inspiration from the lives of the saints. Many of them faced up to suffering and early death with great confidence in their saviour. Their actions can inspire us as well." He describes health as a great gift, one for which he gives daily thanks. "Now that I have recovered from my illness and am back at work teaching, I thank God every

day for the gift of health and to be able to teach again. At one stage during the radiotherapy treatment I lost my voice. I was unable to speak for about a month. There were times when I wondered if my voice would come back. And if it did not come back I wondered how I would manage. But it did and it made all the difference. No longer do I take good health and being able to talk and do the common tasks for granted." Nessan believes it is important to appreciate and give thanks for these gifts. "I suggest we do not wait until we have a serious illness to count our blessings. It should be part of our daily prayers. I think I can say that a serious illness had the potential to either bring you closer to God or make you angry and resolve never to pray again." He believes we are all given opportunities to discover the Lord. "A life threatening illnesss is a challenge to us. How we face up to it will determine whether we grow spiritually or not. Most of the time all we can do is to pray that we will be given the gift of faith to believe in God and courage to face our destiny in the knowledge that the suffering itself can bring us into God's presence."