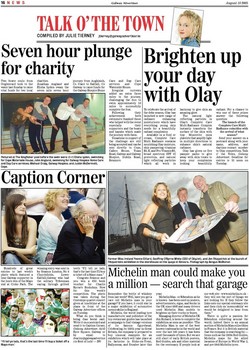 Seven hour plunge Brighten up for charity your day
Two brave souls from Oughterard took to the water last Sunday to raise vital funds for two local charities. Jonathan Angland and Elisha Lydon swam the seven mile seven hour journey from Aughinish, Co Clare to Salthill, Co Galway to raise funds for the Galway Hospice Home Care and Day Care services and Cope Waterside House. Irregular currents added an extra three miles to the journey, challenging the duo to swim approximately 10 miles to successfully complete the feat. Following their achievement both swimmers thanked those who helped with the event especially their supporters and the boats and kayaks which made the journey with them. Donations in support of the challenge are still being accepted and can be sent directly to Cope, Calbro House, Tuam Road, Galway and Galway Hospice, Dublin Road, Renmore.

with Olay
To celebrate the arrival of the debs season, Olay has launched a new range of radiance enhancing moisturisers which have everything young skin needs for a beautifully radiant complexion Available in a fluid or cream, Complete Care Multi Radiance contains nourishing Olay moisture, skin pampering vitamins B3, E, and Pro Vitamin B5, broad spectrum SPF 15 protection, and natural light reflecting particles which all work in harmony to give skin an amazing glow. The natural light reflecting particles in Olay's Complete Care Multi-Radiance Complex instantly transform the surface of the skin with tiny Muscovite mica platelets that amplify light in multiple directions to enhance skin's natural radiance. Olay has given us five pamper packs to give away with skin treats to keep your complexion looking beautifully radiant. For a chance to win one of these prizes answer the following question: The launch of the Complete Care Multi Radiance coincides with the arrival of what season? Send your answer on a postcard along with your name, address, and daytime contact number to Olay competition, Talk o' the Town, Galway Advertiser. Deadline for entries is 12 noon on Tuesday.

Former Miss Ireland Yvonne Elllard, Geoffrey O'Byrne White (CEO of CityJet), and Jim Fitzpatrick at the launch of Fitzpatricks exhibition in the storehouse on the quays in Kinvara. Photograph by Aengus McMahon

Hundreds of great entries to last week's photo which featured a lone Galway supporter in the lion's den of the Mayo end at Croke Park. The

winning entry was sent in by Seamus Lundon, No 6 Churchfields, Lower Salthill,Galway who had the solitary Tribesman saying through gritted

teeth "I'll tell ye lads, that's the last time I'll buy a ticket off a Mayo man." Congrats Seamus and you win a 20 book voucher for Charlie Byrne's Bookshop. Now for this week's competition. The photo was taken during the Contempo quartet concert given at lunchtime at the plaza in front of the Galway Advertiser offices on Tuesday. What do you think is being (has been) said. Write it on a postcard and send it to Caption Corner, Galway Advertiser, 41/42 Eyre Square, Galway or by email to dvarley@galwayadvertise r.ie Best of luck! -- DV

Michelin man could make you a million -- search that garage
Remember the bottle of whiskey from last week? Well, have you got a rare old Michelin man in your garage? If you have, it could star in a major exhibition of automotive memorabilia in England. Michelin, the world leading tyre manufacturer and publisher of the top restaurant guides has launched a campaign to find vintage versions of its famous figurehead. Celebrating its 100th year in Great Britain, the company is prepared to buy unusual examples for an exhibition which will take place at its factories in Stoke-on-Trent, Ballymena, and Dundee later this year. Michelin Man - or Bibendum as he is known - has been used on posters, advertisements, signs, and books in the UK since 1905 and many drivers used Michelin Man models to brighten up their trucks or buses. Managing director of Michelin UK Jim Rickard, is keen to complete the exhibition as soon as possible: "The Michelin Man is one of the best known trademarks in the world and over the last 100 years it has been used thousands of times. But we are still short of early British posters, Red Guides, ads and other material for the centenary. If people look at our web site - www.michelin.co.uk they will see the sort of things we are looking for. If they follow the links onto our special centenary site and then click on `memorabilia' we would be delighted to hear from them." There is quite a passion for Bibendum collecting around the world, indeed there is an annual auction of Michelin Man collectibles in France. But it is British material that the company is searching for -- items such as the 1930s Red Guides, Michelin maps for the allied invasion of Europe in World War 2, and pre 1940 Michelin tyres.