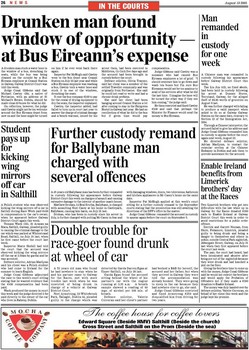 Drunken man found window of opportunity -- at Bus Eireann's expense
A drunken man stuck a water hose in the window of a bus, drenching its seats, while the bus was being cleaned on the outside by a Bus Eireann employee at Ceannt Station in Galway, Galway District Court was told this week. Judge Conal Gibbons said that Michael Cawley (38), a native of Portlaoise, with an address at St Michael's Estate, Dublin, should be made clean 10 buses for what he did. On reflection, however, the judge said Cawley might not be too welcome around the Bus Eireann depot from now on and the hose might be turned on him if he ever went back there again. Inspector Pat McHugh said Cawley went to the bus depot near Ceannt Station on July 22 last year and while a Bus Eireann employee was washing a bus, Cawley took a water hose and stuck it in one of the windows, drenching the seats. It cost the bus company 100 to pay for the rental of drying equipment to dry the seats, the inspector explained. Cawley, the inspector added, had failed to turn up in court last year to answer the charge of criminal damage and a bench warrant, issued for his arrest them, had been executed in Middleton, Co Cork five days ago and the accused had been brought in custody before the court. Defence solicitor, Olivia Traynor, said her client was a member of the settled Traveller community and was originally from Portlaoise. She said he could not read or write and had a chronic drink problem. She said her client had been hanging around Ceannt Station a lot after coming to stay in the Fairgreen Hostel in Galway last year. He had no recollection of what he did to the bus but if given time would pay compensation. Judge Gibbons said Cawley was a nuisance who had caused Bus Eireann employees a lot of grief. "I should sentence him to go down and wash ten buses but I'm sure Bus Eireannn would not be too anxious to avail of his services after what he did the last time. I imagine the hose will be turned the other way if they see him coming," the judge said. He then convicted and fined Cawley 100 and said that perhaps the Minister for Finance would send the money to Bus Eireann.

Man remanded in custody for one week
A Chinese man was remanded in custody following his appearance before Galway District Court this week. Tao Lin Jun (42), no fixed abode, had been held in custody following his arrest at Dunnes Stores, Terryland, Galway, for the alleged theft of 8.96 worth of groceries on August 9 last. He was further charged with failing to produce a valid passport when asked to do so at Galway Galway Station on the same date, contrary to Section 12 of the Immigration Act, 2004. Through a Chinese interpreter, the accused failed to give his address and Judge Conal Gibbons remanded him in custody to appear before the court again next week, August 23. He directed defence solicitor, Adrian MacLynn, to contact the consular section at the Chinese Embassy in Dublin and ask them to provide assistance for the accused.

Student pays up for kicking wing mirrors off car in Salthill
A Polish student who was observed kicking the wing mirrors off a car in Salthill during Race Week paid 400 in compensation to the car's owner, when he appeared before Galway District Court again this week. Tomasz Waek (22), 21 Arasan na Mara, Salthill, Galway, pleaded guilty to causing the criminal damage to the car which was parked at Whitestrand Road, Salthill, on July 31 last, when he first came before the court last week. Inspector Marie Skehill had told the court that the accused was observed kicking the wing mirrors off the car at 2.50am by gardai and he was arrested. Defence solicitor, Adrian MacLynn said his client was a Polish student who had come to Ireland for the summer to learn English. Judge Conal Gibbons adjourned the case to this week's court sitting stating that he wanted evidence that the 400 compensation had been paid. Waek produced the money in court this week and the judge directed it be paid directly to the owner of the car who lives in Raheny, Dublin.

Further custody remand for Ballybane man charged with several offences
A 45-years-old Ballybane man has been further remanded in custody following his appearance before Galway District Court this week on charges of assault and causing extensive damage to the interior of another man's house. Matthew Drohan, 14 Beal Srutha, Ballybane, is charged with assaulting Noel Casey at his home in Castlepark, Ballybane, causing him harm, on July 21 last. Drohan, who has been in custody since his arrest in July, is further charged with putting Mr Casey in fear and with damaging windows, doors, two televisions, bathroom and kitchen appliances in Mr Casey's home on the same date. Inspector Pat McHugh applied at this week's court sitting for a further custody remand to the September courts stating that the prosecution was still awaiting the directions of the DPP's office in the matter. Judge Conal Gibbons remanded the accused in custody to appear again before the court on September 5.

Enable Ireland benefits from Limerick brothers' day at the Races
Two Limerick brothers who got into difficulties with the law while up in Galway for the Races donated 300 each to Enable Ireland at Galway District Court this week in order to avoid convictions for a public order offence. Derrick and Garrett Noonan, from Skule, Fedamore, Limerick, pleaded guilty to being drunk and being a danger to themselves and others in public, outside Central Park nightclub, Abbeygate Street, Galway, on July 31 last when they first appeared before the court last week. The pair, the court had heard, had been intoxicated and abusive after being put out of the nightclub because they were drunk and had knocked a pint on the floor. Giving the brothers time to come up with the money, Judge Conal Gibbons said he would not convict the brothers and would apply the Probation of Offenders Act if they made a 300 donation to Enable Ireland. The money was duly handed over by defence solicitor, Valerie Corcoran, on behalf of her client this week and the judge kept his promise.

Double trouble for race-goer found drunk at wheel of car
A 53 years old man who found he had nowhere to stay when he and his partner came to Galway for the Races, met with more trouble last week when he was convicted of being drunk in charge of a vehicle at Galway District Court. Noel Armstrong, 20 Whitebrook Park, Tallaght, Dublin 24, pleaded guilty to the charge which was detected by Garda Darren Egan at Upper Salthill, on July 28 last. Garda Egan found the accused sitting behind the wheel of his partner's car with the engine running at 2.35 a.m. A breath sample showed a reading of 80 mgs. of alcohol per 100 mls. of breath. Defence solicitor, Valerie Corcoran said her client's partner had booked a B&B for herself, the accused and her father, but when they arrived in Galway they were told the accommodation was already booked. They were going to sleep in the car because they had nowhere else to go, she said. Judge Conal Gibbons convicted and fined Armstrong 250 and disqualified him from driving for two years.

The coffee house for coffee lovers