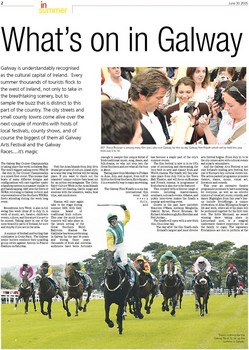 What's on in Galway
Galway is understandably recognised as the cultural capital of Ireland. Every summer thousands of tourists flock to the west of Ireland, not only to take in the breathtaking scenery, but to sample the buzz that is distinct to this part of the country. The city streets and small county towns come alive over the next couple of months with hosts of local festivals, county shows, and of course the biggest of them all Galway Arts Festival and the Galway Races....it's magic
The Galway Bay Cruiser Championship is taking place this week in Galway Bay. The west's biggest sailing event (Wed 29 - Sat July 2), the Cruiser Championship is a mixed-fleet event. This means that boats of many different designs and configurations will race together under a handicap system in a manner similar to golf handicapping. 2005 sees the fleets of NORA returning to Galway in force and representatives of the Southern WIORA fleets attending during the week long event. Roundstone Arts Week is also in full swing this week (June 25 to July 3). A week of music, art, theatre, children's events, culture, and literature it is not to be missed. Taking place in one of the most beautiful parts of Ireland, be sure and stop by if you are in the area. A summer of football and hurling that culminates in Croke Park. The Galway senior hurlers continue their qualifing group series against Antrim in Pearse Stadium on Saturday. Visit the Aran Islands from July 20 to 29 and get a taste of culture, island style, as a nine day long festival will be taking place. If you want to check out the islanders' unique culture then head out for an action extravaganza. The Celtic Spirit Culture Week in the Aran Islands will have set dancing, Gaelic songs and sessions with the islanders, walks, boat trips, and much more. Siamsa will once again take to the stage during summer 2005, with their unique brand of traditional Irish culture. This year the much loved concerts will take place in the lavish setting of the Great Southern Hotel Ballroom. Siamsa Na Gaillimhe has been performing in Galway for the past 16 years and during those years thousands of Irish and overseas audiences have been fortunate

007 Pierce Brosnan is among many film stars who visit Galway for the six-day Galway Film Fleadh which will be held this year from July 5 to 10.

enough to sample this unique blend of Irish traditional music, song, dance, and folk-drama, so why not stop into the Great Southern and see what all the fuss is about. Taking place from Mondays to Fridays in June, July, and August, from 8.45 to 22.30 in the Great Southern, Eyre Square, it is a wonderful way to enjoy an evening. The Galway Film Fleadh is a six day international film event held every J u l y, and

has become a staple part of the city's summer events. The film festival is now is in its 17th year of promoting and showcasing the very best in new and classic Irish and World cinema. The fleadh will this year take place from July 5-10 in the Town Hall Theatre, and will focus on Russian and French cinema. A programme of Irish shorts is also due to be featured. This coupled with a diverse range of events including masterclasses, seminars, outreach events, debates, and public interviews makes the fleadh a popular and exciting event. Guests in the past have included: Maureen O'Hara, Anthony Minghella, Gabriel Byrne, Pierce Brosnan, Sir Richard Attenborough,Jim Sheridan and Neil Jordan ... The fleadh will open with a new Irish film, On a clear day. The day after the film fleadh ends Ireland's largest and most diverse

arts festival begins. From July 11 to 24 the city comes alive with cultural events and a party atmosphere. And the Galway Arts Festival is not only Ireland's leading arts festival, but one of Europe's key cultural events too. The action packed programme presents theatre, dance, music, visual art, literature and comedy. This year an extensive theatre programme promises to have something for everyone, as well as an eclectic mixture of visual art, music, comedy, and dance. Highlights from this year's lineup include DruidSynge, a unique celebration of John Millington Synge's life and work, where all of his plays will be performed together for the first time ever. The Little Mermaid, an award winning show taking place in Leisureland pool, is a magical underwater theatre experience for all the family to enjoy. The legendary Proclaimers are due to perform at the

There's nothing like the Galway Races to stir up the summer in Galway.