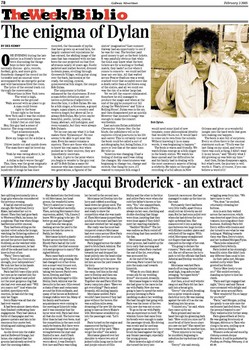 The enigma of Dylan
BY DES KENNY NE EVENING during the late sixties in a friend's house we were discussing the things boys in their late teens normally discuss - girls, records, football, girls, and more girls. Somebody changed the record on the turntable and an unusual voice accompanied by an energetic guitar and wild harmonica filled the room. The lyrics of the second track cut through the conversation: "Wintertime in New York town The wind is high, snows on the ground Walk around with no place to go A man could freeze right to the bone I froze right to the bone New York said it was the coldest winter in seventeen years I didn't feel so cold then Hey, this guy had a sense of humour. The song continued: "I got a harmonica job, began to play Blew my lungs out for a dollar a day I blew inside out and upside down The man there said he loved my sound Yeah he was raving about it, he loved my sound A dollar a day's worse though" This, then, was the great enigmatic and iconic Bob Dylan. Despite the hundreds of songs he has since

recorded, the thousands of myths that have grown up around him, the largely undeserved reputations he has earned, the abiding image of the man that has remained with me has been the one projected on that first afternoon nearly 40 years ago. Suede jacketed and leather booted, dressed in denim jeans, strolling through Greenwich Village, with guitar slung over the back, harmonica at the ready, the smiling, cynical, quintessential folk singer, the unique Bob Dylan. The uniqueness is further enhanced by the elusiveness. If ever a man defies definition and yet invites a plethora of adjectives to describe him, it is Bob Dylan. He can be a folk singer, a bluesman, a gospel singer, a jazz player, a country and western singer, but above all he is always Bob Dylan. His lyrics can be beautiful, poetic, lyrical, cynical, funny, abstract, self indulgent, and even romantic, but they were always Bob Dylan's. Yet no one can say what it is that makes them `Dylanesque'. No one seems to be able to get near this man. Even his name remains a mystery. There are those who claim to know his real name, but when pushed as to their sources, they are immediately uncertain. In fact, it gets to the point where you begin to wonder is the guy real at all? Is Bob Dylan a name for someone who has conned more than two generations, a figment of the

sixties' imagination? Last summer Galway had an opportunity to see if he was for real. The brother paid good money to get us the best tickets. It was painfully obvious that while the GAA may know what the best tickets are for a hurling or football match, they hadn't a clue when it comes to concerts - we could neither hear nor see him. All that wafted across Pearse Stadium was a weak cracked voice that sounded more like a death rattle than a full blown song of the sixties, and all we could see was the rim of a rather large hat. Yet we left the concert exhilarated. Somehow he still managed to produce the magic and when at the end of the gig he pumped out `All Along the Watchtower' and `Like a Rolling Stone', Dylan was in the air, and then disappeared just as quickly. However that moment's magic was enough to make the concert worthwhile. Last autumn Dylan published Chronicles: Volume One. On the blurb, the publishers tell us he explores critical junctures in his life and career. This is certainly true and the book could be called a sort of autobiography, but, being Dylan, it is more or less that at the same time. He tells us: "America was changing. I had a feeling of destiny and I was riding the changes. My consciousness was beginning to change too, change and stretch. One thing for sure, if I wanted to compose folk songs I

would need some kind of new template, some philosophical identity that wouldn't burn out. It would have to come on its own from the outside. Without knowing it in so many words, it was beginning to happen." The book is warm and friendly. We watch Dylan emerge as a folk singer in the heady sixties. We watch his fame spread and the difficulties he and his family had in dealing with the most unsavoury aspects of being a celebrity. He takes us through the recording of a full album in New

Orleans and gives us a wonderful insight into the hard work that goes into making one happen. The book is also full of surprises. Every so often there is the unusual statement such as: "Truth was the last thing on my mind, and even if there was such a thing, I didn't want it in my house," and "Mostly what I did growing up was bide my time." And then, Dylan disappears again, but what's new, the journey is well worth it. That's, of course, if you can believe a word of it!