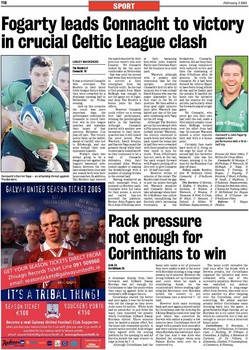 The Borders 9 Connacht 18
It was a relieved Connacht who overcame The Borders in their latest Celtic League fixture when they were rewarded for a dominant opening half in Netherdale on Friday evening. And on this occasion the result was more important than the performance - sufficient for Connacht to record their first win in five league matches and maintain their hopes of that precious Heineken Cup play-off spot. The victory moves them up the ladder, ahead of Cardiff, who lost to Edinburgh, and one point behind their next opponents Llanelli. Friday's clash was always going to be a dangerous test against the league's basement side. Games between the two have always been close and last season both won their home matches. In addition, The Borders had entered

Connacht's Darren Yapp - an attacking threat against The Borders.

the match boosted by their previous week's win over Leinster. Yet Connacht looked by far the more comfortable at Netherdale - that was until the second half when they were forced to survive a fiery resurgence from the Scottish outfit. In the end a 73rd penalty from Mark McHugh was enough to put the game out of sight, and deny The Borders a bonus point for their efforts. However Connacht could reflect on a strong first half performance, winning the pyschological battle in the backline. Although Connacht started with another new formation to their threequarters line, it still looked the more potent. Paul Warwick, David Slemen, and Darren Yapp posed the greatest threat while their counterparts looked bereft as they continued to hit a wall of Connacht defenders. Only their scrumhalf John Weston looked capable of making the breakthrough with a number of sniping breaks in the second half. Having weathered an early onslaught from a pumped-up Borders pack, Connacht were full value for their points. A secure and varied line-out provided the platform. Hooker John Fogarty and No 8 John O'Sullivan were

at their harassing best,while locks Andrew Farley and Christian Short did the business in a solid pack. Warwick, although with a penalty and conversion that hit the upright, produced Connacht's first try after 12 minutes, but it was outhalf David Slemen who was the major playmaker in his first start in the No 10 position. He then added a drop goal eight minutes later after Warwick was halted just shy of the line after combining with Yapp on the left wing. Although The Borders got on the scoreboard with a 27th minute penalty from outhalf Alistair Warnock, the visitors continued to punch holes and when the pack upped the tempo late in half they were rewarded with three penalties which they opted to kick for touch. From O'Sullivan's line-out catch at the tail, the pack surged forward with Fogarty peeling off to dive over to give Connacht a 3 - 15 half time lead. However within 10 minutes of the restart The Borders had closed the gap to just six points through two Warnock penalties and Connacht failed to take advantage when their No 8 McEntee was yellow carded, exemplifying the Scottish side's increasing frustration at the

breakdown. Connacht, however, did not help their cause, losing composure with unforced errors and then the sinbinning of John O'Sullivan after 68 minutes. In truth the Connacht No 8 had been deemed by referee Hayes to have been living offside all day, and he finally paid the penalty. It handed the home side the initiative and the impetus for long periods, particularly when the forwards played a tight game. Yet Connacht, who never got into their own half until the end, made a 73rd minute penalty count when McHugh stroked over his effort from half way. In contrast Warnock missed a sitter minutes later and with it a bonus point. Certainly they made hard work of it, living on the edge for most of the second half, but the better balanced side was the winner, keeping it in the hunt for the Heineken Cup play-off place. Yellow cards: Borders, 55m W McEntee (55m); Connacht, J O'Sullivan 68m). The Borders: G Morton, S Moffat, C MacRae, A Dickson, N Walker, A Warnock, J Weston, P Thomson, R Ford, G Cross, M Blair, C Stewart, J Dalziel, A Miller, W McEntee. Replacements, K

Pack pressure not enough for Corinthians to win
Ards 34 Corinthians 26
A dominant display from their forwards and fullback Danny Riordan was not enough for Corinthians to take the points when they came up against Ards in last weekend's AIB League fixture. Corinthians started the better and once again it was the forwards who led the charge as they drove Ards some 50 metres. When Ards had no option but to pull down the maul, they conceded the penalty which Corinthian fullback Danny Riordain slotted. Three minutes later he landed a similar effort, but the home side responded quickly. A missed tackle provided Ards winger Chris Agnew with the scoring platform for the opening try and AJ Derwin kicked the easy convert to edge in front by 7 - 6. Although Corinthians had the home side under a lot of pressure they were unable to add to the score with Riordain missing a long range penalty on 12 minutes. However the young fullback set up Corinthians' next score when he made a scintillating break on the counterattack before sending right wing Ian Morrissey over. Riordain kicked the convert to put Corinthians into a deserved 7 - 13 lead. However Ards came storming back and once again a missed tackle by Corinthians saw the Ards big No 8 Kenny Heaslip crash over near the post which was converted by Derwin who added a penalty a few minutes later. Corinthians were off target with a penalty kick soon after and were unlucky not to score again when Riordain was halted just short of the line. And it was Ards who finished the stronger when prop Palmer Eccles went over for a converted try. The home outfit extended the lead soon after the break with a Derwin penalty, but Corinthians regained the initiative and were rewarded with one of two successful penalties. However this was cancelled out almost immediately with a long-range effort from Derwin, who went on to score another try after chipping over the Corinthian cover and converting. He added another penalty before Corinthians came storming back into the game. A great break by Nigel Carolan set up Riordain for a try under the posts which he converted, but it was not enough to secure even a deserved bonus point. Corinthians: D Riordain, I Morrissey, D O'Sullivan, N Carolan (cpt), J Buckley, M O'Boyle, S Considine, A Diffley, J Mannion (S Curtain), JJ De Villiers, D Gilmartin, (Deelin), P Cunningham, A Casanova, R Fleming.