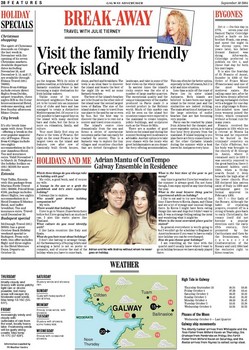 HOLIDAY SPECIALS
Christmas shopping
The spirit of Christmas descends on Cologne the last week in November with the opening of its seven Christmas markets. Available departure dates including November 26, and December 3, 10, and 17, are available through Eblana Travel (091) 766802. Prices from 489pp include return direct flights from Dublin, airport transfers, three nights B/B in the 5-star Intercontinental Hotel, welcome meeting, and free Sunday afternoon Rhine Cruise.

BYGONES
Oct 4: -- On this day in 1779, seven-year-old Samuel Taylor Coleridge pulled a knife on his brother Frank, ran away, and spent the night in the stormy open; two years later, his father dreamt Samuel was dying. Afterwards, Coleridge preferred to publish on Oct 4, and chose that day for both his marriages. It is also the feastday of St Francis of Assisi, founder in 1209 of the Order of Friars Minor (Franciscans) and one of the most beloved medieval saints. His calling came late, after he had been deeply affected having exchanged clothes with a beggar for one day on a pilgrimage to Rome. Like-minded men (and soon women) joined the Order, which remained without a formal rule for many years. Francis received the stigmata in 1224 while on a retreat at Monta La Verna and he requested to be buried in the criminals' cemetery on the Colle d'Inferno, but his body was brought to the church of St George in Assisi, where it remained until in 1230 it was secretly removed to the great basilica; there it remained hidden until 1818, when a 52-day search found it deep beneath the high altar of the lower church. Pius XII declared him patron saint of Italy in 1939 and parliament gave its formal approval in February 1958. Oct 7 -- Our Lady of the Rosary. Although the habit of repeating prayers, counted off in a string of beads, goes back to early Christianity, the rosary itself did not become a popular devotion until the early 15th century; first promoted by the Carthusians and then by the Dominicans, who s p o n s o r e d Confraternities of the Rosary and until 1984 had the exclusive right to bless rosaries.

Visit the family friendly Greek island
on the Aegean. With its miles of golden coastline, a rich history, and fantastic sunshine Paros is fast becoming a major destination for Irish holiday makers. Unlike some of its more developed neighbours Paros has yet to be turned into an immense strip of clubs and bars and has managed to retain a distinctive Mediterranean feel. Of course it is still possible to have a good time on the island with many excellent bars and clubs, but the focus is more on relaxation, family, and culture. Your most likely first stop on Paros is the town of Piraeus. Set right on the coast Piraeus is the largest town on the island and features row after row of classically built Greek houses, shops, and bed and breakfasts. The town is an ideal base to discover the island and boasts the best of the night life as well as some fantastic beaches. The best of the island's beaches are to be found on the other side of the island near the second largest town of Rafina. The size of the island makes it easy to travel from one place to the next by car or even by bus, but the best way to discover the place is to rent out a scooter and travel cross country. The island's centre rises dramatically from the sea and forms a series of spectacular mountain paths that can easily be reached by scooter. This is a fantastic way to explore the tiny villages and countless churches that are dotted throughout the landscape, and take in some of the best views on the whole island. In ancient times the island's rocky centre was the site of a number of large marble quarries. The exceptional quality and the unique transparency of the marble produced in Paros made it a coveted product in the Hellenic world. Much of this marble can still be seen on the island but countless tonnes were exported to the mainland to create temples, public buildings, and sculptures such as the Venus de Milo. There are a number of good hotels on the island and during the summer booking well in advance is advisable. Another option is to take your chance with the locals who greet holidaymakers as you depart the ferry offering accommodation. This can often be the better option, especially in the off season, but it is a hit and miss situation. Less than a mile off the coast of Paros lies its sister island Antiparos. Both islands are believed to have been one larger island in the recent past and the similarities are indeed striking. The main attraction of Antiparos is the large selection of nudist beaches that are fast becoming very popular. Paros can be reached by plane from Athens but the cheaper, and more enjoyable option, is to take a four hour ferry journey from the mainland. If island hopping is you plan there are ferry connections to all the other Cyclades islands during the summer while a boat leaves for Antiparos every hour.

City break
It's city break time again with Aran Travel - offering a break in the ever popular majestic city of Prague. Prices from 199pps include two nights accommodation in the 3star Amadeus Hotel. Tax and insurance extra. Valid November 1 to March 20. Telephone the holiday hotline on (091) 562595 for more details.

Adrian Mantu of ConTempo Galway Ensemble in Residence
What is the best time of the year to get away? Any time is great but I love hot weather so the summer is always good. I'm not fussy though, I can enjoy myself at any time during the year. What is the most bizarre thing you've experienced while on holiday? I like to eat and to try new foods all the time. I have been to Korea, Japan, and China and ate a lot of strange and unusual things there. In Korea I might have been eating things like cats and dogs but I didn't want to ask. It was a strange feeling eating the meat and wondering what it might be. Where is the most overrated place you've visited? In general everywhere is worth going to but I wouldn't go for a holiday to England or America because if you want to have a really nice holiday you can be overcharged. How do you choose your holidays? I am travelling all the time with the quartet and I usually know where I want to go on holiday because we have already played there.

Budapest special
McDonagh Travel (091) 565931 has a great October Bank Holiday weekend special to Budapest. From only 449, this offer includes flight and three nights in the Hotel Mercure Duna. Departs on October 22.

Which three things do you always take on holiday with you? My cello, a good book, and of course my wife. A lounge in the sun or a grab the guidebook and let's start exploring holiday? I always like to explore. Who would your dream holiday companion be? My wife. Where would that holiday be? I love to go to Venice. I have been there before but I love going back as much as I can. I also like exotic places like Thailand. What culture do you most identify with? I like Latin countries like Italy and Spain. What do you hate most about holidays? I don't like having to arrange things. All the bureaucracy of buying tickets and arranging a hotel is not so poetic or romantic, and of course the end of the Adrian and his wife Andrea without whom he never holiday when you have to come back. goes on holiday.

SUNDAY
Gusty with heavy spells of rain at times.