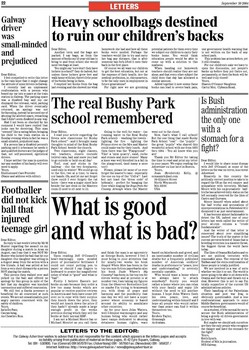 Galway driver was small-minded and prejudiced
Dear Editor, I feel compelled to write this letter in the vain hope that it might change the attitude of some drivers in Galway. I recently had an unpleasant confrontation with a person who boxed my car into a space at the train station in Galway. The parking space was a disabled bay and my car displayed the relevant, valid, parking card. When the driver eventually returned, an apology was not forthcoming, instead he accused me of abusing the allotted space, remarking that I didn't seem disabled in any way. Had I not been so shocked by his comment I would have replied that looks can be deceiving. This man "seemed" like a caring father, bringing his child to the train station on a Sunday evening when in fact he was a small-minded, prejudiced man. If a person has a disabled person's parking card it is because he needs it and qualified doctors are the judges of that, not self-possessed, egotistical drivers. I hope neither the man in question nor any member of his family will ever need to apply. Yours, Disillusioned Care Provider (Name and address with editor).

Heavy schoolbags destined to ruin our children's backs
Dear Editor, Another term and the bags are packed. I say bags, as from the amount of books my 13-year-old has to bring to and from school she would need two bags at least. You might say `sure don't they have lockers in school?' they do indeed, but unless these lockers grow feet and walk home with her, there's little point of the books being in them. I emptied her books from the bag last evening and she showed me what homework she had and how all these books were needed. Perhaps the teachers would like to try and carry her bag any distance, that is after someone has fork-lifted it onto their back in the first place. Of course we all want our children to get the best education, but not at the expense of their health. Are the medical profession, ie, chiropractors, to be the only ones in employment in future generations? For right now we are grooming potential patients for them every time we subject our children to carry their books home. You would think education people would be able to come up with a solution to this madness. When handing out homework teachers should realise they are not alone, and that every other subject the child does that day has allocated a similar amount. Added together it now seems these books can lead to severe back pain, one government health warning that is not written on the back of any school pack. This problem has arisen before, yet it still remains. For our children's sake we have to open the discussion, put people's backs up before they put theirs out, permanently, or then the book will be well and truly closed! Yours, Sharon O'Connor Naughton Cartur Mor, Clybaun Road,

The real Bushy Park school remembered
Dear Editor, I read your article regarding the Seven new classrooms for Bushy Park school" - and it brought many thoughts to mind of the Real Bushy Park School beside the church. Two classrooms, eight classes, two teachers, closets (outside toilets) rain, hail and snow you had to go outside or hold on all day! Turf, coal and sticks in the hallway - (for the two fireplaces), used only in winter! We could go up to the fire, two at a time, to warm our hands. Oh, and let me not forget (how could I ever forget) the rat holes - there was a major sized hole beside the last desk in the Masters room (I used to sit next to it). Going to the well for water - (no running water in the Real Bushy Park school) - washing the towels lighting the fire - lighting the Primus stove so the Mrs and Master could make tea for their lunch. And then there was the "Playground" Yike! a `mini quarry', sand, rocks and stones and more stones! Many a knee was well bloodied in a fall in the playground, (and many a nose too!) Please, please let none of us ever forget the master's cane - especially the one on top of the "Cofra"! Last but not least the `dress code' of hobnails - perfect for banging the floor while singing the Boys from the County Armagh when the Master went out to the closet. Now, that's what I call school! But the one thing that made Bushy Park School "real" - the "pupils" the great "pupils" who shared this wonderful school with me from 1955 thru 1964 - You all know who you are! Thank you Mr Editor for taking the time to read and print my letter in your paper. We enjoy reading the Advertiser on line here in Boston. Yours, Joan (Broderick) Kelly, @ ocmanmrk@aol.com 39 Gilmore Street North Weymouth MA 02191 USA

Is Bush administration the only one with a stomach for a fight?
Dear Editor. I would like to share some dismay with Jeff O'Connell at some of the letters on the war on terror, in a recent Advertiser. Bizarrely in this country the politically correct position to take is to regard the US as the evil empire and sympathise with terrorists. Michael Moore with his un-journalistic halftruths has achieved deity status on the left normally reserved for the likes of Castro and Guevara. Moore himself when asked about the half truths and accusations of misrepresentations in Fahrenheit 9/11 dismissed it as just entertainment. It has become almost fashionable to detest the US, indeed one of your letters last week called the writer of your alt.com column a "crude fundamentalist". And the writer of that letter is concerned about over simplifying issues? The truth of the matter is the current perverse breed of Islam that is breeding terrorism is a massive threat, the biggest threat the world faces today. The likes of Osama Bin Laden and co are not political terrorists with reasonable aims. The removal of the Taliban and the stern confrontation of these people is totally justified. We are involved in a war of sorts whether we like it or not. The world is never going to be able to sit down with Osama and the boys and thrash out a deal. However this is not to say I'm totally supportive of the current US administrations policies. Their handling of the Palestinian situation and post war Iraq is obviously questionable. And a less confrontational approach to some Middle Eastern governments would of course be beneficial. As a student, it'd be normal for me to accuse the Bush administration of being a greedy oil driven government in love with war. But maybe we should ask ourselves are they the only people who recognise the danger and have the stomach for the fight? Yours, Keith Lynch. Student of MA in journalism. NUI Galway.

Footballer did not kick ball that injured teenage girl
Dear Editor, In reply to last week's letter by Mr M Hunter regarding the assault on my daughter during a match in Aran on August, can I say that it was NOT Mr Hunter who kicked the ball that hit our daughter. Our daughter was sitting in a dugout away from the action with a few friends. A ball was pelted at her from a very short distance by a person NOT playing the match. This person then walked over and picked up the ball and offered no apology by this group in spite of the fact that my daughter was knocked unconscious and suffered concussion. We still feel a Garda presence is beneficial for all concerned at such events. We are not sensationalists, just angry parents concerned with the safety of chidlren. Yours, Iarla De Paor, Caoran beag, An Cheathru Rua.

What is good and what is bad?
Dear Editor, Upon reading Jeff O'Connell's heart-warmingly open minded piece of journalistic brilliance I could not resist putting pen to paper or should I say fingers to keyboard to praise his magnificent sense of what is "good" and what is "bad". Firstly I believe Eason's put books on sale because they order a few too many books which are popular or receive positive reviews in America and then have some left over so to cope with their surplus they knock down the price, they would not knock down the price if they hadn't' already made a large enough profit in the weeks previous during which they sell the books at their normal RRP. I am not a Michael Moore fan or Michael Moorist as you call them and think the man is as egocentric as George Bush; however I feel I must bring to your attention that for ninety-two weeks his book Stupid White Men has been in the top ten non-fiction paperbacks also his book Dude Where's My Country? has been in the top ten for eleven weeks and at present is at number two, I am taking my figures from the Observer Bestsellers List so maybe I'm trying to brainwash you with ideas of peace and harmony and the possibility that one day we will not have a super power whose economy is based around its ability to annihilate other countries. As for your hero John Waters, well I despise warmongers and any human being who would rather have camps dedicated to abusing detainees human rights, wars based on falsehoods and greed, and an inestimable number of civilian deaths but a frequently published number of American soldiers' deaths in preference to "peace, love and understanding" is severely mentally unstable. Who would want a home where we always have to attack somebody? Surely you would rather a home where you can relax with your family and enjoy life without the need to kill another human. I hope John Waters finds his own peace, love, and understanding within himself and I hope all people who would rather war than peace can find it within themselves too. Yours, Reuben Taylor, Grannagh Ardrahan.