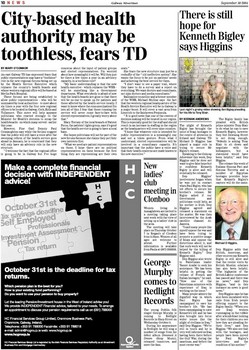 City-based health authority may be toothless, fears TD
BY MARY O'CONNOR An east Galway TD has expressed fears that public representatives may have a "toothless" role in the new regional forums being set up by the Health Service Executive which replaces the country's health boards and whose western regional office will be based at Merlin Park Hospital. These forums are being established to allow public representatives - who will be nominated by local authorities - to meet about six times a year with the four new regional offices to be located in Galway, Cork, Kells and Tullamore. This move will help appease politicians who reacted strongly to the Minister for Health's decision to scrap the health boards - on which many served - earlier this year. However, Fine Gael Deputy Paul Connaughton says while the forums suggest that the public will still have a voice after the sweeping reform of the health service goes ahead in January, he is concerned that they will only have an advisory role in the new structure. " I welcome the fact that the regional office is going to be in Galway but I've huge concerns about the input of patient groups and elected representatives. I'm worried about how meaningful it will be. Will they just be there a few times a year in an advisory capacity, in a toothless role? "My basic understanding is that the new health executive - which replaces the WHB will be something like a Government department. What everybody is afraid of now that the health boards are gone is that there will be no-one to speak up for patients and those affected by the health service locally. I want to know where the consumer/patient fits into all of this. I fear that those running the service will never come face-to-face with elected representatives. I greatly worry about that." Mary Tierney of the local branch of Patient Focus, the patients' rights group, says it's good that the health service is going to have a local base. She hopes politicians will not be part of the new forums because she claims they put their own interests first. "What we need are patient representatives on these. I hope there are no political representatives on them because the first thing they are representing are their own seats." She fears the new structure may just be a reshuffle of the " old ineffective system". She wants the focus to be put on patients' needs and achieving the best service for them. "I don't want to see a paper trail, where they have to do a survey and a report on everything. We want doctors and consultants, not spin doctors and media consultants." Ballinasloe councillor and a former member of the WHB, Michael Mullins says the fact that the western regional headquarters of the Health Service Executive will be in Galway is a major boost. It will cover a vast area from Limerick to the Inishowen Peninsula. " It is good news that one of the centres of decision making will be located in our region. This is especially good for the staff and should result in an increase in staffing in the region as the headquarters will cover nine counties. "I hope that whatever role is intended for public representatives is a meaningful one and not a token gesture. From what I understand, elected representatives will be involved in a consultancy capacity. It's important that the public have a voice and that their health concerns are made known to the new executive."

There is still hope for Kenneth Bigley says Higgins

BY KERNAN ANDREWS The plight of Kenneth Bigley has brought the issue of Iraqi hostages to the centre of attention in Ireland and Galway TD Michael D Higgins has played a major role in trying to secure Mr Bigley's release. Speaking to the Galway Advertiser this week, Dep Higgins said he does not want to give false hope but is confident Kenneth Bigley is alive and will eventually be released. Dep Higgins' involvement began when he was put in contact when Paul Bigley, who has led efforts to secure his brother's release. Mr Bigley asked if our Government and politicians could help, as his mother is Irish. Dep Higgins agreed and released a statement on the matter. He was then interviewed by the Arab satellite channel AlJazeera. "I said many people like myself oppose the war and have been trying to promote a positive image of Islam and oppose the distortions about it, and that such work will not be helped by the killing of Kenneth Bigley," Dep Higgins said. Dep Higgins also wrote to Palestinian leader Yasser Arafat to seek his assistance. "He has been helpful in getting the release of French and Italian hostages," he said. "Now one of the Palestinian ministers with experience of Iraq is working on the issue." Many people admire the dignified way in which Paul Bigley has campaigned to save his brother's life. "He has been campaigning to save Kenneth's life and he has also brought into focus wider issues like the plight of civilians in Iraq," said Dep Higgins. "We're still in touch and he is very well informed on Iraq having been there before the Gulf War, during the sanctions, and before the most recent war."

New ladies' club meeting in Clonboo
Women living in Annaghdown are invited to a meeting taking place next week with the view of setting up a ladies' club in the area. The meeting will take place on Thursday October 7 in Regan's of Clonboo from 8.30pm. Women of all ages are welcome to attend. Further information is available from Paula at (087) 2989828.

The Bigley family has pleaded with British prime minister Tony Blair to do what he can to save Kenneth Bigley, however they feel Downing Street is not doing enough. "Nobody is asking Tony Blair to sit down and negotiate with the kidnappers, but a statement would have been helpful," said Dep Higgins. The release this week of Italians Simona Pari and Simona Torretta and a number of Egyptian hostages provides hope that Kenneth Bigley's captors will do the same.

Dep Higgins adds that British, American, and other sources say Kenneth Bigley is still alive and that the recent visits by British Muslim scholars has also been helpful. "The highpoint of the British Labour conference has passed and there was no news," said Dep Higgins, "and in this instance no news is good news." Dep Higgins says he has also been inundated with calls from Irish people offering support to the Bigley family. "When you see Iraqi women rummaging in the rubble after a bomb blast looking for their children you see how they are pleading for their lives," said Dep Higgins. "We also see that with the hostages, and people have been moved by Paul Bigley's interviews and the condition of his mother."