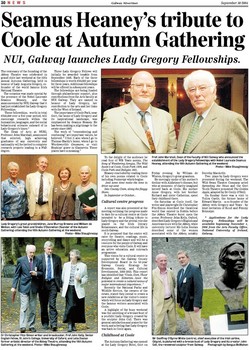 Seamus Heaney's tribute to Coole at Autumn Gathering
NUI, Galway launches Lady Gregory Fellowships.
The centenary of the founding of the Abbey Theatre was celebrated in grand style last weekend at the 10th annual Autumn Gathering, held in honour of Lady Augusta Gregory, cofounder of the world famous Irish National Theatre. The occasion was made special by the presence of the Nobel Laureate Seamus Heaney, and the announcement by NUI, Galway that it had just established the Lady Gregory Fellowships. These fellowships, worth in total 540,000 over a five year period, will encourage research within the humanities, languages, and the social behavioural sciences unheard of in Lady Gregory's times.* The Dean of Arts at NUIG, Professor John Marshall, announced that selected, high achieving graduates of any university and nationality will be invited to complete research projects leading to a PhD degree. Three Lady Gregory Fellows will initially be awarded tenable from September 2005. Each of the three fellowships is worth 20,000 per year for three years. Additional fellowships will be offered in subsequent years. The fellowships are being funded through philanthropic support, plus contributions from the Arts faculty at NUI Galway. They are named in honour of Lady Gregory, her contribution to the arts and her links with the West of Ireland. The importance of Coole Park, near Gort, the home of Lady Gregory and its inspirational landscape, was emphasised by Seamus Heaney. He has been making a pilgrimage to the estate since 1965. The work of "remembering and continuing" are important values, he believed. " I feel it also when I go to Thomas Hardy's home, when I go to Wordsworth's Grasmere, or visit Hopkins' grave in Glasnevin. These places have a meaning." To the delight of the audience he read four of WB Yeats poems, The Song of Wandering Aengus, The Wild Swan's at Coole, Coole Park 1929, and Coole Park and Ballylee 1931. Heaney concluded by reading three of his own poems related to Coole including Postscript which begins: And some time make the time to drive out west Into County Clare, along the flaggy Shore, In September or October...
Prof John Marshall, Dean of the Faculty of NUI Galway who announced the establishment of the Lady Gregory Fellowships with Nobel Laureate Seamus Heaney, attending the 10th Autumn Gathering at the weekend. Photo:- Mike Shuaghnessy

Cultural centre progress
A report was also presented at the meeting outlining the progress made to date for a cultural centre at Coole intended to be a fitting tribute to Lady Gregory and the pivotal role she played in the Irish literary Renaissance, and the cultural life in south Galway. It is proposed that the centre will cater for theatre, readings, music, storytelling and dance and will be a resource for the people of Galway and everyone who visits Coole. It will have an active education and outreach programme. This vision for a cultural centre is supported by the Galway County Development Board in its 10-year Galway County Strategy for Economic, Social, and Cultural Development, 2002-2012. This report has identified that "Coole, Gort, Thoor Ballylee and Kiltarten...have the potential to create a cultural nexus of major international importance.." Recently the National Parks and Wildlife Service, the owners of the estate, stated they intend to create a new exhibition at the visitor's centre which will focus on Lady Gregory and the famous writers associated with Coole. A highlight of the busy weekend was the unveiling of a bronze bust of a youthful Lady Gregory created by the sculptor John Coll. There was general satisfaction and praise for the work; and a feeling that Lady Gregory was back in Coole again.

Friday evening by William de Winton, Gregory's great-grandson. He movingly spoke of his mother's decline with Alzheimer's disease, but who at moments of clarity imagined herself back at Coole. His mother Anne Gregory, with her brother Richard and sister Catherine, spent their childhood there. On Saturday at Coole itself, the writer and playwright Dr Christopher Fitz-Simon described the theatrical world that existed in Dublin before the Abbey Theatre burst upon the scene. Professor John Kelly, Oxford, described Lady Gregory's English and American tours with the Abbey, while university lecturer Ms Lelia Doolan described some of the women associated with the Abbey, notably

Dorothy MacArdle. Two plays by Lady Gregory were presented during the weekend. The Wild Swan Theatre Company acted Spreading the News and the Gort Youth Theatre presented The Golden Apple, adapted by Dr Cecily O'Neill. On Sunday there was a visit to Tulira Castle, the former home of Edward Martin - a co-founder of the Abbey with Gregory and Yeats - by kind invitation of Ruud and Femmy Bolmeijer. * Applications for the Lady Gregory Fellowships will be available beginning November 1, 2004 from the Arts Faculty Office, National University of Ireland, Galway.

Childhood at Coole
The Autumn Gathering was opened at the Lady Gregory Hotel, Gort on
Mr Geoffrey O'Byrne White (centre), chief executive of the Irish airline, CityJet, is pictured with a bronze bust of Lady Gregory and its creator John Coll, the renowned sculptor from Galway. Photograph by Aengus McMahon