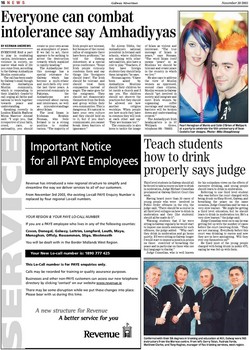 Everyone can combat intolerance say Amhadiyyas
BY KERNAN ANDREWS EVERYONE HAS a part to play in combating racism, intolerance, and violence in society, no matter what walk of life you come from, according to the Galway Amhadiyya Muslim communtiy. The call has been made by Galway's small though vibrant Amhadiyya Muslim community, which is responding to their khalifa's (leader's) call urging all faiths and nations to work together towards peace and understanding. Speaking recently in London Khalifa Hadhrat Mirza Masroor Ahmad said: "I urge you, that irrespective of your faith, creed, race, or nationality, you should create in your own areas an atmosphere of peace. If we fail to act, there appears to be nothing to arrest the destruction towards which mankind is rapidly heading." The Amhadiyyas feel this message has a special relevance for Galway which has become a multi-ethnic and muti-faith city over the last three years. A persecuted community in Pakistan, the Amhadiyyas are concerned about racism and intolerance, as well as misunderstandings about Islam. The local Imam is Irishman Ibrahim Noonan, who feels Ireland is in a strong position to combat racism. "The majority of Irish people are tolerant, but because of the recent influx of emigrants there have been problems," he told the Galway Advertiser, at a special press conference. "Some Irish people viciously condemn them and say things like `foreigners should leave'. The Irish should be tolerant and should treat them compassion instead of anger. The same goes for the emigrants. They should not disassociate themselves from the Irish and group within their own communities. This is dangerous. It's natural to have your own culture and they should hold on to it, but if you don't communicate, you cannot break down barriers of ignorance." Dr Aleem Uddin, the Amhadiyya's national president in Ireland said schools, where children are mixing with other nationalities, also have a role to play. "Teachers, if they have foreign students they should help them integrate,"he says. Noonan agrees. "I have been asked by Amhadiyya Muslims should their children be let inside a church and I say yes. The children should not observe the practices but they should be allowed see how another religion worships. When people see how much they have in common they will look at each other and say `They are humans too'." The community is also keen to tackle the image of Islam as violent and intolerant. "The true message of Islam is peace," says Noonan. "The word Islam itself means `peace' so as Muslims we should be tolerant and create peace in the country in which we live." He also says to address the view of Muslim women as oppressed, second class citizens, Muslim women in Galway should "get involved in society and integrate and meet Irish women by organising coffee mornings and meetings, barriers will be broken down and understanding created." The Amhadiyya's Irish headquarters is in 67 Wellpark Grove, telephone 091 - 768832.

Pearl Heneghan of Menlo and Colin O'Brien of Wellpark at a party to celebrate the 10th anniversary of Sean Costello hair designs. Photo:- Mike Shaughnessy

Teach students Important Notice for all PAYE Employees how to drink
Third level students in Galway should all be forced to take a course on how to drink in moderation, Judge Michael Connellan proclaimed at Galway District Court this week. Having heard more than 30 cases of young people who were involved in Public Order offences in the city, the judge said, "There should be a course in all third level colleges on how to drink in moderation and they [the students] should all be made do it". Warning students that if he were sitting in Galway regularly he would start to impose one-month sentences for such offences, the judge added: "Why can't they drink in moderation and go home quietly. If I were sitting in Galway longer I would start to impose a month in prison on those convicted of breaching the peace and in particular on those who use foul language to Gardai." Judge Connellan, who is well known

properly says judge
for his outspoken views on the effects of excessive drinking, said young people should learn to drink in moderation. Referring to one third level student who was before the court charged with being drunk on Shop Street, Galway, and breaching the peace on the same occasion, Judge Connellan said he was a very slow learner. "He might be getting a third level education, but he should learn to drink in moderation too. He's a very slow learner," the judge said. Judge Connellan went on to say he was getting fed up with the number of cases before the court involving drink. "They are not learning. Everybody before this court was drinking to excess and now they are in here apologising. Will they ever cop themselves on?" He fined most of the young people charged with being drunk in public 75, saying he was fed up with them.

Revenue has introduced a new regional structure to simplify and streamline the way we deliver services to all of our customers. From November 3rd 2003, the existing Lo-call PAYE Enquiry Number is replaced by four regional Lo-call numbers.

YOUR REGION & YOUR PAYE LO-CALL NUMBER If you are a PAYE employee who lives in any of the following counties: Cavan, Donegal, Galway, Leitrim, Longford, Louth, Mayo, Monaghan, Offaly, Roscommon, Sligo, Westmeath You will be dealt with in the Border Midlands West Region.

This Lo-Call number is for PAYE enquiries only. Calls may be recorded for training or quality assurance purposes. Businesses and other non-PAYE customers can access our new telephone directory by clicking `contact' on our website www.revenue.ie There may be some disruption while we put these changes into place. Please bear with us during this time.