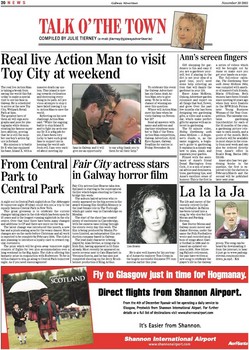 Real live Action Man to visit Toy City at weekend
The real live Action Man is taking a break from saving the world this Saturday to make a special visit to see his fans in Galway. He is scheduled to arrive at the new Toy City, Wellpark Retail Park at 2pm. The greatest hero of them all will sign autographs and pose for photographs while demonstrating his famous super hero abilities, proving that he is still the number one boy's action figure in Ireland. His mission is to battle Dr X who has equipped his base, Island X, with a massive death ray system. This island is moving towards civilisation and destroying everything in its path. All previous attempts to stop it have failed leaving it up to Action Man to save the world. Reflecting on his new challenge Action Man said: "While the ongoing battle to stop Island X and to fight my arch enemy Dr X is a big job for me, I have been very lucky to have such great fans to support me in keeping the world safe from evil. I am very excited about meeting my To celebrate this event the Galway Advertiser has six Camo Atak Action Man sets to give away. To be in with a chance of winning answer this question: Where will Action Man meet his fans when he visits Galway on November 22? Send all answers with name and address and daytime telephone number to Talk o' the Town Action Man competition, Galway Advertiser, 41/42 Eyre Square, Galway. Deadline for entries is: Friday November 28.

Ann's screen fingers
Gift shopping for gardeners is fun and easy if you are a gardener yourself, but if playing in the dirt is not your idea of a good time, you'll need some help selecting an item that will dazzle the gardener in your life. Enter Anne McKeon, Galway Advertiser garden columnist and expert on all things that bud, flower, and grow. Over the past few months she has been designing two gardening gifts, a video and a calendar, which make perfect gifts for anyone with an interest in gardening. The 50 minute video, Hobby Gardening with Anne McKeon -- A Beginner's Guide, is, as the name suggests, a beginner's guide to gardening. It explains in a simple way how to plan, plant, and maintain your garden. Filmed with the assistance of Anne's friend Donal Harrington from Cork, it is a mix of practical advice and demonstrations, gardening tips, and Anne's excellent sense of humour. This is the first in a series of videos which will be brought out by Anne so make sure you get your hands on a copy. The full-colour calendar, The Gardening Year with Anne McKeon 2004, was compiled with another of Annes's Cork friends, Maria O'Sullivan. Both women have been friends since meeting 10 years ago when they were finalists in the BPW/Irish Permanent Young Business Woman of the Year Competition. The calendar contains gardening tips/checklist for each of the 12 months of the year, a gardening picture relevant to each month, and a quote of the month. Both products will be available in most shops in the county from next week and can also be ordered directly from Anne's office in Buaile Beag, Barna (091) 521186. Anne also has two gardening books in the pipeline, the first is expected to hit the shelves in February/March and the second will be published later next year.

fans in Galway and it will give me an opportunity

to say a big thank you to them for all their help."

From Central Fair City actress stars in Galway horror film Park to Central Park La la la Ja
A night out in Central Park nightclub on Upr Abbeygate St tomorrow night (Friday) could win you a trip to the equally famous Central Park in New York. This great giveaway is to celebrate the current changes taking place in the club which has been open for 15 years and is the longest running nightclub in the city centre. Over that time there have been many changes and additions to CP and there are more on the way. The latest change was introduced this month, a new bar and a plush seating area for the weary dancer. More changes are on the cards before Christmas and all work is expected to be complete by February 2004. The club is also planning to introduce a loyalty card to reward regular customers. The prize which will be given away tomorrow night consists of flights for two plus accommodation over a long weekend in the Big Apple. The club is offering this fantastic prize in conjunction with Budweiser. To be in with a chance to win, go along to Central Park tomorrow night. As if you need encouragement! Fair City actress Lise Hearns (aka Ava Spillane) is starring in the supernatural thriller which began shooting in Clarenbridge this week. The auburn haired actress who recently appeared on the big screen in the award winning film Goldfish Memory is the lead female role in The Turlough which got under way in Clarenbridge on Monday. The start of the shoot has created plenty of excitement in Clarenbridge, with the camera vans rolling through the streets every day this week. The film is being produced by Maxim Pictures Limited, an independent film production company based in Galway. The lead male character is being played by Alan Devine, a rising star in Irish film, having appeared in 11 films already. Most recently he appeared on movie screens next to Cate Blanchett in Veronica Guerin, and he has also just completed shooting on the Jerry Bruckheimer production of King Arthur. The life and career of the recently retired Co Galway footballer Ja Fallon has been turned into a song, by who else but Leo Moran and Pardaig Stevens. Saw Doctor Moran and Galway music mover and shaker Stevens, under the name the Folk Footballers wrote and recorded an album of songs about Gaelic football in 1998 and released an updated version in 2001. Now following Fallon's retirement, the pair have written a new song to celebrate the player's life in the Galway

jersey. The song can be heard by downloading it from the internet; to hear it just go to www.padraigstevens.com/music/mixdown_ja.mp3. - KA