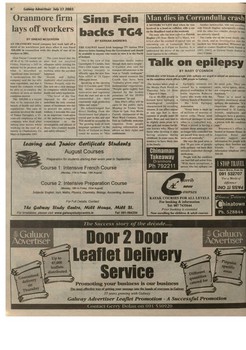 O r a n m o r e firm lays off w o r k e r s
BY SINEAD MCGOVERN AN O R A N M O R E based company last week laid off a t h i r d of its w o r k f o r c e j u s t d a y s a f t e r it w a s fined 500,000 in c o n n e c t i o n with t h e d e a t h of one of its workers in 2001. Oran Precast Concrete laid off 40 of its 110 workers on Friday, blaming a fall in demand for its products and what it described as "significant costs increases". A spokesperson for the company said the lay-offs were regrettable, and that it hoped the company would be able to re-employ the workers as soon as market conditions recover. The court heard that the man had not received adequate safety training for the height at which he was working when the accident happened. Health and Safety Authority chief executive, Thomas Beegan, said the fine sent out a clear message to companies which breach health and safety regulations. "The level of the fine The 500,000 is a record imposed by the court fine to be imposed for a underlines the truly criminal breach of health and safety nature of businesses who fail regulations. The case in to protect the safety of question involved the death workers. I welcome this case of Tomas Farragher, a 2 5 - as an important vindication year-old employee of the of the authority's ongoing to the company who died after c o m m i t m e n t falling nine metres while investigation and pursuit of working on the roof of a those who commit health factory in Charlestown, Co and safety offences." Mayo in September 2001.

Sinn Fein backs T G 4
BY KERNAN ANDREWS T H E GALWAY based Irish language TV station TG4 deserves better funding from the Government and should be available to anyone who wants to view it in the North of Ireland. This is the view of Dep important media source Caoimhghi'n 6 Caolain, Sinn through their native tongue". Fern's Dail leader who was 6 Caolain also said the in Galway recently to transport infrastructure in the officially open the new Sinn west is "totally inadequate" Fein office at 19 Upper while natural resources like Abbeygate Street. Corrib Gas have been Speaking at the opening "virtually given away" to Dep O Caolain said:"TG4 multinational corporations. has shown tremendous "People quite rightly feel innovation and ingenuity cheated by the broken from the start and are to be promises of the FF/PD commended for their government," he said. consistently high production Sinn Fern's office will be values and output." open to the public daily He acknowledged that Monday to Friday from direct funding from the 10am to 1pm. Ann Marie Government had played a Carroll, chairperson of the crucial part in this and said West Ward Cumann, Sinn TG4 should be accessible for Fein na Gaillimhe welcomes people "the growing body of Irish inquiries from language speakers" in the seeking information and North of Ireland so there advice on their rights and could be access to "this entitlements.

Man dies in Corrandulla crash
A M O T O R C Y C L I S T died when he was involved in a head-on collision with a car on the Headford road at the weekend. The man, who has been named as Patrick Hughes (28) from Shrule in Co Mayo, was killed after he crashed at speed into an oncoming c a r at Luimnagh West in Corrandulla at 8.45pm on Sunday. It is understood the driver of the car received facial injuries in the collision. Another motorcyclist, who was travelling with Patrick Hughes, subsequently collided with the other two vehicles, though he was not seriously injured. The Garda was on the scene shortly after the crash, and an investigation into the incident has been launched. Witnesses are asked to contact Headford Garda Station at (093) 25412, or Galway Garda Station at (091)538000.

FAMILIES AND friends of people with epilepsy are urged to attend an awareness talk on the condition which affects 1,000 people in Galway. .The lecture takes place at the Menlo Park Hotel on Thursday July 24 from 7.30pm to 9.30pm. Up to 4 0 , 0 0 0 people in Ireland have epilepsy, a neurological condition characterised by recurring seizures. It can affect anyone at any age but is most common in people under 20 years. Boys and men tend to be slightly more prone to it than girls and women but noone knows why. Many of those who develop it start having seizures during childhood. In some cases, the tendency to have these runs in the family. Epileptic seizures are caused by a temporary physical malfunction in the brain, explains Rebecca Leavy who works with the Galway branch of Brainwave the Irish Epilepsy Association. "Every brain is made up of millions of neurons or nerve c e l l s . These send electrical messages to each other in a controlled way. When a person is having a seizure these messages are no longer fully controlled but are passed from nerve cell to nerve cell erratically." She says the good news is that 70 per cent of people with epilepsy can have their seizures controlled through medication. People with the condition can lead full and active lives. "With these exceptions, a person who has epilepsy can

do most j o b s . They can swim, enjoy sports, drive, use computers and operate machinery." There is a need to heighten awareness about epilepsy, she maintains. "It is important that people understand it. If family, friends, employers and colleagues have a positive, informed attitude, it can help a person with the condition cope." Brainwave's office is located at Ozanam House, St Augustine Street and provides support and information for people with epilepsy, their families and friends. For more information telephone (091) 568180.

'For a World of

iNO II KAYAK COURSES FOR ALL LEVELS For booking & information Tel: 087 7435644
Prior booking is essential