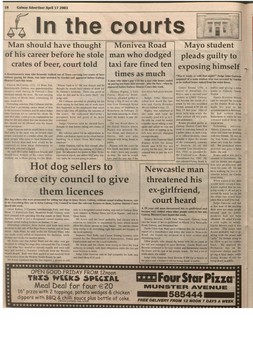 In t h e c
A Knocknacarra man who brazenly walked out of Tesco carrying two crates of beer without paying for them, was later arrested by Gardai and appeared before Galway District Court this week. Eamon McCarthy ( 2 2 ) , 12 Binn Sin, Knocknacarra, Galway, was apprehended by security staff during St Patrick's Day weekend outside the store. He was carrying two crates of Becks beer, containing 24 cans, worth 5 0 . Defending solicitor, Dan Callanan said his client had a promising career ahead of him in the insurance business and he asked Judge John Garavan not to convict his client. He said McCarthy could give no explanation for what he did and added that one moment like this should not be allowed ruin his future career prospects. Judge Garavan said he would have to treat McCarthy in the same way he treated other people convicted of a similar crime. He said poor people who stole to feed themselves came before him and h o w c o u l d he be e x p e c t e d to treat them differently to McCarthy who had a big job. He said McCarthy had been brazen and should have thought o f his career before walking out without paying for the drink.

Man should have thought Mayo student Monivea Road of his career before he stole man who dodged pleads guilty to crates of beer, court told taxi fare fined ten exposing himself times as much
"Whose fault is it? He was brazen and he thought he would have plenty of drink for St. Patrick's weekend. There was greed in what he did and he is a petty thief," the judge said. Mr Callanan persisted in pleading for his client saying he had been out of work since this happened as his employers had asked him to take time off pending the outcome of the court. He indicated M c C a r t h y ' s prospects were not g o o d if he were convicted. Judge Garavan said he should have thought of that before taking two crates of beer. His solicitor asked for an adjournment to obtain a probation report on his client before handing in a letter from M c C a r t h y ' s employer. Judge Garavan said he had enough after reading the accused was earning 23,000 a year. He adjourned the matter to May 26 for a probation report, and added McCarthy was very lucky he was not going to prison. A man who didn't pay 1 5 for a taxi ride home, ended up paying ten times that amount - plus the fare - when he appeared before Galway District Court this week. Thomas Rigney, 3 Villa Patria, M o n i v e a R o a d , Galway, pleaded guilty to hiring a Big O taxi to take him from Dominick Street to his place of residence in Bohermore on February 22 last while knowing he didn't have the money to pay the fare. The taxi driver drove to the Garda Station where Rigney was arrested. He was drunk, and abusive to Gardai, and was also charged with being drunk in public. Rigney told the court he was drunk and didn't realise he didn't have any money on him. He said he would have paid the next day if the taxi driver had given him his card. Judge John Garavan asked how much the fare was and Garda Brendan Moore replied it was 15. Rigney was surprised at the sum and said he normally paid 6 or 7 . He told the court he would consider never taking a taxi again and added he was not in the habit of tipping as he felt taxi drivers charged enough already. Judge John Garavan fined R i g n e y 1 0 0 for being drunk and 5 0 for not paying for the taxi. He also ordered him to pay the 15 fare. James Keane ( 1 9 ) , a native o f S w i n f o r d , C o M a y o , and a second year student at GM1T Galway had become the victim of a prank by his two so-called friends around 4.30 am on May 19 last year. One of them held him while the other pulled off his jeans and underpants. Keane pleaded guilty at Galway District Court this week to exposing himself in a public place, in such a way as to offend modesty, cause scandal or injure the morals of the community, contrary to Section 18 o f the Criminal Law Amendment Act, 1935, as amended by the Criminal Law (Rape) Amendment Act. 1990. He also admitted being drunk in

"Was it windy or cold that night?" Judge John Garavan enquired o f a male student who was arrested by Gardai as he walked home, naked from the waist down. public and giving a false name at Galway Garda Station. Garda Brendan Moore said he arrested the accused on the Dublin Road as he made his way to his accommodation at Renmore. He had walked from Bohermore to where he was arrested naked from the waist down. Defending solicitor, Valerie Corcoran, said her client had been out drinking with two friends. He was on the way h o m e , when the other two took his clothes off. He panicked when arrested and gave a false name, she said. Keane said it was just a moment of foolishness. He said his friends had dragged him into an alleyway and taken his pants off. He had been walking for five to 10 minutes before the Gardai came along. When asked it his shirt would have covered him, Keane replied that he was going to take it off and put it around his waist, but he felt the other two would have taken that as well if he had. Judge Garavan said that at that hour of the morning there were not many people around and so public modesty had not been offended. He asked if it was a c o l d night or windy. Garda M o o r e said it was neither. The j u d g e said Keane probably had to go along with the prank and "jolly" his friends along in an effort to get his clothes back. He applied the Probation A c t on the exposure charge and for giving a false name, while fining Keane 100 for being drunk in public.

Hot dog sellers who were prosecuted for selling hot dogs in Quay Street, Galway, without casual trading licences, vow to d o everything they can to force Galway City Council to issue the relevant licences to them, Galway District Court heard this week. Derek Kidney, 5 Cluainin, Innishannagh Park, and Alan Ward. 32 Ballinfoyle Park, Headford Road, Galway, were both charged with operating hot-dog stands at Quay Street, Galway. which is not a designated casual trading area, without casual trading licences on January 11 last. Defending solicitor, Sean Acton said both men were involved in the sale of hot-dogs from a mobile unit in Quay Street. Alan Ward, he said, works for Edward Ward, who has made every effort to regularise his business, while Kidney also works for another person. Mr Acton said that before Ward and the other man got involved in selling hot-dogs they contacted the City Council to see what they needed to operate legally and were told they just needed a clearance certificate from the Western Health Board. Both men then applied to and received food stall licences from the Western Health Board, he said. Mr Acton explained that the law requires a person to sell only in a designated casual trading area and in Galway those were situated in Market Street and Eyre Square - and not in Quay Street. Mr Acton said the local authority had chosen not to exercise its function to implement by-laws which would allow his clients operate in Quay Street. He said his clients were trying to do everything right but could not because of the local authority. Inspector Noel Kelly said Casual Trading Licences were issued by the Department o f Enterprise, Trade and Employment and not the Local Authority. Mr Acton said his clients were trying to force the local authority to comply with their obligations under the Act and issue licences to them. Judge John Garavan said he had sympathy for both men and fined them 2 5 each.

Hot dog sellers to force city council to give them licences

Newcastle man threatened his ex-girlfriend, court heard
A 29 y e a r o l d man threatened his ex-girlfriend and became very violent when other people came to her aid, Galway District Court heard this week. Tommy Browne, Corrib Park, Newcastle, Galway, went into the house of his ex-girlfriend on March 14 at Newcastle Road, Galway, and threatened her. Garda Carol Ann Ward gave evidence that she received a report of a disturbance and when she went to Newcastle Road, she found the accused in a very violent and threatening mood. Other people, who shared the house with his ex came to her aid and managed to eject Browne. Garda Ward said Browne continued to be very violent and threatening outside the house and he spat at the people inside. He had a lot of drink taken, she added. Judge John Garavan fined Browne 3 0 0 for a breach of the peace and a further 100 for being drunk in public.