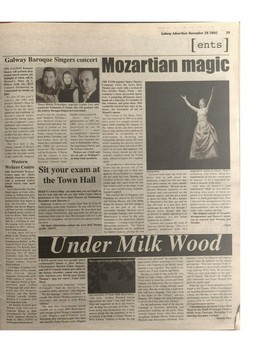 [ents]
Galway Baroque Singers concert
THE GALWAY Baroque Singers will perform their annual choral concert, the highlight of which will be M o z a r t ' s M a s s in C M i n o r with t h e R T E C o n c e r t O r c h e s t r a in Leisureland on Sunday at 8pm. As part of this year's concert, the GBS will perform Mozart's Mass in C Minor, The Great Mass. This is by far the most ambitious and elaborate of Mozart's church works, coloured by Italian opera and the composer's own tenderness and compassion. The Sanctus is sumptuously set for full orchestra and double four part chorus, as is the magnificent fugal "Hosanna". The first half of the concert consists of Ravel's Mother Goose Suite; which evokes the fairytale world of the stories the composer

Mozartian magic
THE EVER popular Opera Theatre C o m p a n y visits the Town Hall Theatre next week with a revival of T h e (Little) Magic Flute - the company's most successful opera ever. A gripping adventure story based on a fairytale, it's brimful of fun, romance, and great tunes. This wonderful mystical love story is for m a n y , t h e favourite of all of Mozart's operas. This version of The Magic Flute was first conceived in 1997 as an ideal entry-point for younger people to opera while retaining the integrity of the music. It has seen three national tours to date and has won a plethora of accolades in recognition of its achievement in involving and enchanting children across the land while retaining the musical interest and production values beloved of OTC shows by its loyal adult audience. The Galway shows should see the total audience numbers break the 10,000 mark, unheard of figures for a regional opera. This production is directed by Gavin Quinn and the pivotal role of the Queen of the Night will be taken once again by Nicola Sharkey in a character she has made her own. Pamina, the sweetest princess who stole every young (and old!) man's heart the last time round is back in the shape of one of our most lauded young sopranos, Sinead Campbell. The comical duo of Papageno and Papagena are played by loe Corbett and Victoria Massey, and John Milne brings his humour and deft timing to bear on the god of all these marionettes, Sarastro. The dual role of the lovelorn Tamino, and insidious Monostatos is taken by the only newcomer to this production, Darren Abrahams - a young tenor of great Mozartian pedigree. The Opera Theatre Ensemble will be conducted by Andrew Synnott, playing his own

Western Writers Centre
THE WESTERN Writers' Centre open its doors officially tomorrow at 6pm, with a weekend winter school which runs until Sunday. Scoil Gheimridh Chaitlin Maude opens on Friday with a reading by Belfast-born poet, Gearoid MacLochlainn, at The Imperial Hotel, Eyre Square at 8pm. On Saturday Susan DuMars and Kevin Higgins will host two-day workshops in English (prose, poetry) at Canavan House. Nuns Island, Galway at 11am, followed at 2pm by a workshop in seannos singing with singer-inresidence to NUI, Galway, Brid Ni Mhaolchiarain. At 4pm. there will be a debate on the "Position of Irish Writing and Language in Contemporary Belfast", at The Imperial Hotel. Eyre Square, chaired by The Burning Bush editor Micheal Begnal. and featuring Pol 6 Muiri. journalist with The Irish Times, and poet and Butler Awards winner, Gearoid MacLochlainn. At 6.30pm. at Galway City Library, there will be a launch from Scottish literary magazine, Northwords, of its 'Folio' editions of poetry. At the Imperial Hotel at 8pm. renowned poet. Cathal O'Searcaigh and poet, storywriter and 1997 Hennessy Literary and The Butler Literary awards winner Micheal O Conghaile. will read from their work. On Sunday Scottish poet Stewart Conn will read at Canavan House at 2pm. accompanied by Heather Clarke. Inquiries should be made to (091) 533595 or writersgalway@eircom.net.

Tenor Robin Tritschler, s o p r a n o Lynda Lee, and conductor Proinnsias 0 Duinn who will perform with the Galway Baroque Singers in Leisureland. Dublin, on November 30. used to tell his children, Since their first and Vaughan William's performance in 1983, the Five Mystical Songs for baritone solo and choir. The GBS have established choir is joined on this themselves as one of Ireland's most occasion by soloists Ailish Tynan, soprano Lynda Lee, accomplished amateur tenor Robin Tritschler, and choirs. Their first album De Ian Caddy, bass, all of Anima was recorded last whom have performed with year in Ballintubber Abbey, the GBS on previous the Augustinan Church, and occasions. The conductor the Galway Cathedral. will be Proinnsias O Duinn Tickets are 16/8 and and the concert is also are on sale at Mulligan's being performed in the or from choir members. National Concert Hall,

Sit your exam at the Town Hall
HERE'S A funny thing - an exam time you can laugh at, but it's true and you can see why when Exam Time is performed at The Town Hall Theatre on Wednesday December 4 and Thursday 5. Backstage Academy are bringing Exam Time by Drop the Dead Donkey writer Andy Hamilton. The play tells the story of three students waiting to sit an exam. We hear about their fears, anger, frustrations, and hopefully we will get to understand their point of view. The teenagers will love it, the parents will sympathise, and the teachers are asked to make a run for it. Eor more information contact the town Hall Theatre on 091 - 569777.

arrangement. Synnott took time out from the hectic tour to talk about the production. I asked him first how they went about making the opera suitable for a young audience. "We took out the densely Masonic elements in the original and concentrated on the fantastic aspects, and also got it down to about two hours. We did a matinee in Waterford a few days ago and we had 500 kids at it and they were spellbound the whole way through! I should stress though that this production is equally appealing to an adult audience, it's not meant exclusively for children." Synnott also praises the work of director Gavin Quinn. "This is a fantastic production with very

imaginative staging by Gavin. There's something very poetic about his visualisations, he also has a great sense of humour so he's expanded the comical elements of the story." And what of Synnott's own contribution? "Well, my first task was deciding what music to leave out which was heartbreaking because there's so much great music in it. Then I devised the arrangements for the production's six singers and five instrumentalists, who are on piano, violin, cello, clarinet, and flute." The magical sounds of Synnott's arrangements and Mozart's music can be enjoyed next Monday and Tuesday. CMcB

Under Mi
I HAVE never seen two people more e n t h u s i a s t i c a b o u t a play before. Churchmouse director Conor Maguire and Jeff O ' Connell, former arts editor of the Galway Advertiser, cannot stop going into r a p t u r e s over Welsh poet Dylan Thomas's 'play for voices', Under Milk Wood. "It's the beautiful language," asserts O'Connell. "And the characters, the wonderful quirky characters" adds Maguire - "but the language," insists O'Connell, "It sounds like Dylan Thomas swallowed a dictionary and mixed it with Welsh whiskey." The idea that Churchmouse would actually put on Under Milk Wood started aptly enough (given Thomas's reputation) in a pub. Maguire and O'Connell were discussing play and playwrights they likes and naturally Dylan Thomas arose. Maguire There's a nasty lot that live here, when you come to t had experience of Under Milk Wood before. "The poet Sydney Bernard Smyth approached me when I was with Attic in Sligo and suggested we do it. my reaction was Tn Sligo are you mad. we'll die'." Far from dying that production was a huge success giving him the confidence to try it in Galway at the Bank of Ireland Theatre in NUI, Galway "helping to bridge the gap

Woo
narrators, voiced by Maguire and Duncan Lacroix. keep the audience on the straight and narrow. One cast member Scan ()' Toole is allowed to move freely around the stage playing Willy Nilly the postman. "There are such great names in this play" said O'Connell, "like Evan's the Death the jolly undertaker and Organ Morgan who plays the church organ." While the play is being performed at full length in Bol Theatre, NUIG. Churchmouse arc launching the production in Galway City Library this Monday at 6pm with the cast performing extracts. Putting the play in context will be Jeff O'Connell as the distinguished guest speaker. Churchmouse perform Under Milk Wood im the Bank of Ireland Theatre. NUIG from Thursday December 5 to Saturday December 7 at 8 pm. Mtchrie Vine*

between town and gown" he explained. He approached fellow actor/director Ciaron Davies, who happens to be Welsh, about putting a cast together. The result is an eclectic mix of Irish, English, and Welsh. The play is a kind of "day in the life" of a Welsh sea-side village, called LLareggub. From dawn to dusk the retired and blind Captain Cat (played by Davies) listens to the activities of the village through sound and voice. But this is far from a high-brow play with heavy language. "Just take a look at the name of the village," advises Maguire. "It's 'bugger all' spelt backwards, a sort of school-boy joke from Thomas." For the performance most of the cast arc standing at lecterns, doubling and sometimes tripling up on parts. They include Simon Jones, who also plays saxophone, G r a i n n c Moore, Claire-Louise Bennett and Alexandra Glennon. Tow