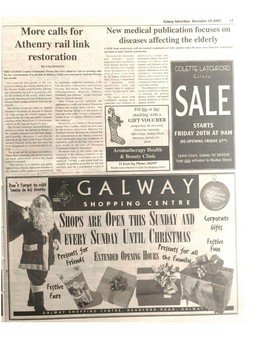 More calls for Athenry rail link restoration
BY UNA SINNOTT THE GALWAY County Community Forum this week added its voice to growing calls for the reinstatement of a rail link at Athenry, which was removed by Iarnrod Eireann last month. The removal last month of the rail crossover linking the Galway-Dublin line to the disused freight track between Athenry and Claremorris has led lo continuing calls for the reversal of the works, which have essentially disconnected part of the proposed Western Rail Corridor from the national rail network. The Galway forum has called on Iarnrod Eireann to reconsider its decision to remove the link, citing the stated support for strengthening the road and public transport corridor from Waterford to Letterkenny outlined in the National Spatial Strategy. The Forum welcomed Iarnrod Eireann's decision to renew the turnout at Athenry in the southerly direction towards Gort. Ennis. and Limerick. However, it said that the removal of the link in the Tuam direction seemed illogical, given that the town has been designated as a national hub in the NSS. The group said the prospect of a GalwayTuani-Mayo commuter rail service would be set back indefinitely unless the Tuam turnout is restored. "The railway is a valuable and publicright of way offering short term remedies to the chronic traffic congestion experienced by commuters within the catchment of the line between Claremorris and Galway serving Ballindine, Milltown, Tuam, Abbeyknockmoy. Monivea, Athenry, Oranmore and Galway." forum chairman John Joe Conwell claimed. "Our Forum would welcome the opportunity to work with Iarnrod Eireann to promote and market such a service. Our Forum Steering Group is in the process of liaising with other county community forums in the 12 counties affected to further this campaign." Meanwhile, in a letter to Roscommon senator Terry Leyden, which has been seen by the GALWAY ADVERTISER, Minister for Transport Seamus Brennan has claimed that the reinstatement of the Athenry crossover could significantly delay the completion of signalling work on the line, and could in turn result in the loss of European Commission funds for the project. Brennan said in the letter that the inclusion of the Athenry crossover in the resignalling scheme would have cost in the region of 750,000. a sum which could not currently be justified given that the line had not been used for a considerable length of time.

New medical publication focuses on diseases affecting the elderly
A NEW book which deals with the medical examination of older patients takes the focus away from new technologies and back to basic clinical examination. Increasing life expectancy and Ireland's ageing population have resulted in most doctors dealing with older patients on a regular basis. EXAMINATION OF THE OLDER PATIENT, a new bo6k by Dr Eamon Mulkerrin of NUI. Galway's department of medicine, deals specifically with the complex array of symptoms which can present in older people. The books deals with conditions ranging from glaucoma and cataracts to palpitations, eczema, and rheumatoid arthritis. The book attempts to refocus both students and clinicians on the clinical evaluation of older patients. Illustrations from the contributors' individual slide libraries serve to provide an illustrated description of the evaluation of older patients in a systematic fashion. The publication is expected to prove beneficial to doctors in training for general practice, geriatric, and general internal medicine, as well as medical students.

FILL HIS OR HER STOCKING WITH A