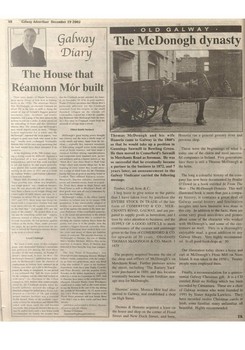 Cjafway (Diary
The House that Reamonn Mor built
There were shades of Martin Scorsese's latest movie Gangs of New York at Galway docks in the 1920s. The notorious Martin Mor McDonogh, an elected Cumann na nGael TD at the time as well as being the owner of one of Ireland's biggest general merchants, fuel, fertiliser and timber importers, led a gang of his men down to the harbour to sort out a strike. A strike paralysed the unloading of boats and this infuriated Mairtin Mor. The strikers and McDonogh's men stood angrily nose to nose. "Things looked unpleasant for a while and Mr McDonogh". reported the local papers, "was obliged to push men back who stood in his way". Insults were exchanged. Eventually Mairtin Mor led his men away protesting that the boat would have been unloaded if he wanted to. At the beginning of the 20th century earnng a living could be difficult. Against a background of a war against Britain. Independence, and Civil War. work was hard to get and hard to do and wages generally were pitiful. Jim Larkin addressed a public meeting in the town in 1911 and as a result the Galway Worker's and General Labourers' Union was founded. Martin Mor. described in his obituary as 'huge growling man, whose very hospitality was rough spoken" was a hands-on business man. He was physically tall and strong ( he once burst a blood-vessel weight lifting) and a keen judge of cattle, horses, and men. As a Cumman na nGael TD. he was elected in 1927 and 1933. there were two things he hated with a vengeance: Fianna Fail and trade union officials. He regularly announced to the Dail that " you people (FF) are the curse of the country". He invited them to go out and do something useful and " employ someone instead of talking to us here". On several occasions, he led protests against strikers at the docks. Once, under pressure for cargo, he got police protection for his men to unload the Norwegian steamer Balder in the teeth of a fierce strike. that the Claddagh people attended his funer al, on November 24 1934, in great numbers. Peadar O' Dowd speculates that Martin Mor's particular affection for the Claddagh stemmed from his origins in the small thatched villages on the islands off Lettermullen. Legend has it that his grandfa ther Reamonn Mor McDonogh built the fam ily's first shop on Crappagh island from the proceeds of salvage from a wreck. Oldest family business McDonogh's great buying power brought into Galway and the west a whole range of exotic smells and tastes. Apart from the fer tiliser. ( originally they imported mountains of fish-eating seagull waste from coastal areas of South America; and later made a chemical fertiliser mixing superphosphates and compounds from imported rock, pyrites and sulphuric acid in a factory known as the "Black Box" now Jurys Hotel at Wolf Tone bridge ) there were sweeter things too. At the begining of every winter they would adver tise a range of dried fruits for the Christmas baking that was as good as anything found in London. They offered Valencia raisins. Muscatels. Smyrna sultanas. Australian raisins and sunmaid raisins, loose or in pack ets. From their shops in High Street and Flood Street as well as Merchant's Road, all their goods were sent all over Connemara by boat from the Claddagh.

McDonogh's today, is the oldest family business in Ireland now in its unique fifth generation. It has successfully adapted to modern city pressures and largely re-located out of the narrow city streets to the more spa cious Bally bane. It has contributed generous ly to the social and particularly to the artistic life of the city. Martin Mor is credited for wresting the famous Galway Races from the gentry and gave it to the people, now the summer's biggest festival. Literally thou sands of Galwegians have worked there over the years and many of them are familiar names to everyone. The present chairman of McDonoghs is Thomas, the son of Martin Loyal Claddagh Mor's brother Michael. Mairtin Mor never We learn a little more of this complex married. A women. Mary O'Malley was giant, who dominated Galway's economic believed to have been his long time compan and political life during the first three ion. decades of the last century, in Peadar O" The late Peter O'Donoghue's son Dowd's latest book In from the West - The Donough became managing director, Michael McDonogh Dynasty,* published last week Fallon's family connections with the compa end. In McDonogh's time the chances of ny go back two generations, there was Brod employment in Galway were summed up as Long who worked 37 years in the fertiliser follows: you either got a job in McDonoghs'. department, with for a time Paddy Costello joined the Army or emigrated. At one period and Peter Browne, and the popular Ernie it was estimated that "half the town worked Boucher on the timber department tragically for the company and the other half looked on killed in a storm in Connemara in 1995. And with envy". As chairman of the Urban to illustrate how times in the workplace have Council in 1931 Mairtin Mor controversially changed. Eleanor Burke from Woodquay stood by the Claddagh people when the would lead as many staff as she could muster health authority insisted the village of to say the Rosary at the end of the day during thatched cottages be pulled down. It was con the month of November. At 12 noon every demned as a breeder of TB. and without day. Larry Hynes rang out the Angelus in the proper sanitary facilities was a constant Rood Street premises and woe betide those health hazard. Many of the residents vigor who didn't stop in their tracks and beat their ously resisted the demolition and Martin Mor breasts. sided with them until the end became published and printed in Galway. illustral inevitable. But at least he insisted that no cot ed and on side for iOeuro. tage be pulled down until a new house could Ronnie O'Gorman accommodate the family. No wonder then. rogormantrgarwayadvertiser.ie

T h o m a s M c D o n o g h and his wife Honoria ran a general grocery store and Hanoria came to Galway in the 1860's previous shop. so that he would take up a position in Gunnings Sawmill in Bowling Green. These were the beginnings of what is He then moved to Comerford's Sawmill today one of the oldest and most success in Merchants Road as foreman. He was ful companies in Ireland. Five generations so successful that he eventually became later there is still a Thomas McDonogh at a partner in the business in 1872, and 7 the helm. years later, an announcement in the Galway Vindicator carried the following The long a colourful history of the com message. pany has now been documented by Peadar O'Dowd in a book entitled In From The West - The McDonogh Dynasty. This well Timber, Coal, Iron, & C. illustrated book is more than just a compa I beg leave to give notice to the public that I have taken over by purchase the ny history, it contains a great deal of ENTIRE STOCK IN TRADE of the late Galway social history and fascination form of COMERFOD & CO., MER insights into how business was done in CHANTS ROAD, GALWAY, and am pre this city. In addition to the facts, there are pared to supply goods as heretofore, and I some very good anecdotes and pomes trust by strict attention to business, and the about some of the character who worked SUPPLY OF A GOOD ARTICLE to merit with McDonogh's, and some of the cus continuance of the custom and patronage tomers as well. This is a thoroughly given to the firm of COMERFORD & CO. enjoyable read, a great addition to any for upwards of 30 years. Obediently Galway library. Very highly recommend THOMAS McDONOGH & CO, March 1 ed. In all good bookshops at" 30 1879 Our illustration today shows a horse and The property acquired became the site of cart at McDonogh's Flour Mill on Nuns the shop and offices of McDonogh's on Island. It was taken in the 1950's. Twenty Merchants Road. Further premises across people were employed there. the street, including 'The Battery Yard' were purchased in 1889, and this location Finally, a recommendation for a quintes eventually became the main fertilizer stor sential Galway Christmas gift. It is a CD age area for McDonoghs. entitled Realt na Nollaig which has been recorded by Curnamara. These are a choir Thomas' sister, Monica Mor had also of Galway women who were founded in moved to Galway, and established a shop 1991 by Sister Angela Lawless. They on High Street. have recorded twelve Christmas carols in Irish, some familiar, many unfamiliar, all Thomas & Honoria acquired a lease on beautiful. Highly recommended. the house and shop on the corner of Flood Street and New Dock Street, and here, TK