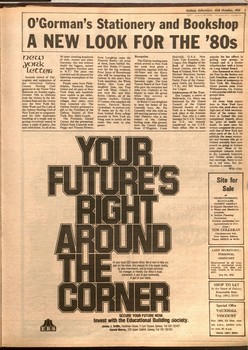 A NEW LOOK FOR THE ' 8 0 S
nerx) Arecord crowd of Galwegians and supporters of the victorious Galway County Hurling Club gathered at the Tower View Ballroom on Sunday night, October 19th to celebrate both the victory in the AllIreland final and the victory over the New York Sel. Mike Wade and Pat Lally of the Galway Hurling Club of New York are to congratul ated for their diplomatic handling of a tough task in getting everybody seated to enjoy a night of gaiety, fun and celebration. In all of my 30 years covering hundreds of club, county and other functions this was without doubt the biggest, noisest and happiest function seen in N.Y.! The place was crowded and all enjoyed the lightning atmosphere of the occasion. People came from Phila delphia, Hartford, Rhode Island and all parts of New York State and hundreds were unable to get tables. From Galway towns and villages they came, even from Limerick city. The Galway Society presented a gift to the President of the Galway Society of New York, Mrs. Mary Lynch. The President, Gerald Carney did the presenting. Others from Limerick were Peggy and Vincent Powers, from Loughrea came the Finnerty family--all seven of them, from Salthill Mr. and Mrs. Nealis O'Connor over for the big weekend, Peter Joyce of Roundstone who will be competing for Galway in this year's New York marathon, the White family, Mrs. Lena and daughter Joan, son Tom and wife Mary. Others I met were Mr. and Mrs. Robin Cheney, all of the Galway hurlers, Christy O'Connor who supplied the music, Patricia Bowes (Ardrahan). At present over 35 teams are in the U.S. from Ireland. Even college grounds in New York are being used to satisfy all the teams that want to play games. Reception The Galway hurling team which arrived in New York last week were given a reception, together with the All-Stars and the Kerry champions at the Rosie O'Grady restaurant last Saturday night. The Irish Tourist Board of New York who gave the reception had John Cox (Galway) at the airport to meet the group when they arrived at Kennedy Airport. At Rosie's I was delighted to meet the father of the Connolly boys, Mr. Pat Connolly who was with an old sparring partner of mine Inky Flaherty who is the trainer of the Galway hurling team. Also present were the Consul General Sean O'Higgins, Liam Mulvihill, G.A.A. New York; Tom Kennedy, Aer Lingus; Des Magahy of the Bank of Ireland, Cork; Ronan Gaynor, also of the Bank of Ireland, New York; Michael Morrissey, former President of the G.A.A.; Paddy Price of the Connemara Gaels; Joe Kennedy, I.T.B.; and Bill Maxwell, Aer Lingus. Irishwoman of the Year Ena Langan, a native of Ballycastle, Co, Mayo was honoured by the Grand Council of the United Emerald Society of New York at a banquet which took place at the Astorian Manor. Ena, who is a sales manager for C L E . Tours in the U.S. was recendy transferred to the C L E . Paris office. She is most popular for her efforts in getting tour groups to Ireland and is a former schoolteacher with a home on Long Island Sound. Also honoured as Man of the Year by the Society was Jack Donohue, owner of an Irish chain of restaurants in New York. Mr. Donohue, whose parents came from Willi amstown, Co. Galway is also popular with the Irish groups here. Critical All three Irish papers here in New York have articles this week about the high cost of Irish vacations. Most of the writers who were in Ireland this year complained bitterly about the price of hotels and meals. In most cases the writers compared the prices with that of New York and other parts of the U.S. In addition the many restaur ant and barmen who go to Ireland annually have now soured on going to Ireland next year. Most of the complaints concern hotels in the Listowd, Limerick and Dublin areas during race meetings. Sony to end on a sad note, but the situation is serious. Willy Fahy