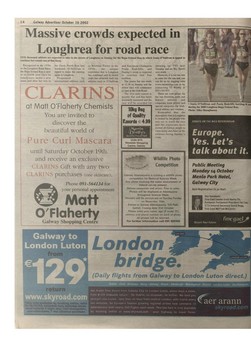 ONE thousand athletes are expected to take to the streets of Loughrea on Sunday for the Bupa Ireland Run in which Sonia O'SuIIivan is tipped to continue her recent run of fine form. Recognised in the 1970s as the Loughrea Road Race, the Bupa Ireland Run is now in its fourth year since its renaissance under a new name and after her win in the Great North Run last weekend, O'SuIIivan is tipped to make the running again in Loughrea. Frequented by international athletes such as Brendan Foster in the 1970s, the unique experience that is Loughrea has continued and in recent years has attracted such top athletes such as O'SuIIivan and European Champion Paula Radcliffe, and Sunday's event is expected to continue that fine tradition. The junior fun run starts at 12.30 on Sunday and the senior race will commence at 1pm at the Gort Road. The five-mile course is mainly flat and has been accurately measured and the race will be recorded for

Massive crowds expected in Loughrea for road race
at Matt O'Flaherty Chemists
Y o u are invited the of
Units 9/10 Westside Shopping Centre, Galway showing on TV3 next Tuesday and on Sky Sports next week. However, it is not too late to enter for the run and you can do so by logging onto www.onrunning.com or by contacting TJ Beatty at (091)841953. There are cash prizes for the top finishing male and female athletes and corporate team prizes and special categories for Irishbased athletes and veterans. Remember that the atmosphere that is Loughrea is created by the people who turn out to watch the race and the organisers have invited all Galway people to come along and cheer on the athletes during Sunday's event.

DEBATE ON THE NICE REFERENDUM

Wildlife P h o t o Competition
Galway Atlantaquaria is holding a wildlife photo competition for National Science Week. Any photo involving the water environment of for Ireland can be entered. Various categories and prizes. Free to enter. Photos will be displayed at Atlantquaria throughout Science Week. Winners will be a n n o u n c e d on Sunday Funday on November 10th. Entries to Galway Atlantaquaria. Toft Park. Salthill. Closing d a t e 31 st October. Please write your n a m e , a g e (if under 21) address and phone n u m b e r on back of photo. All photos will be returned.
For f u r t h e r i n f o r m a t i o n call 0 9 1 585100