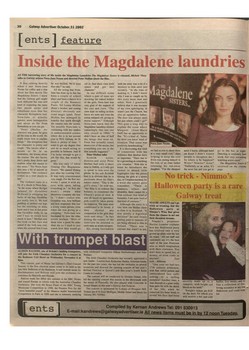 I N S I D E
It was raining heavily when I met Nora-Jane Noone for coffee and a chat about her first movie The Magdalene Sisters. I knew that the Galway girl might look different but was still kind of expecting the same fast paced quips and rebellious eyes that her character Bernadette had. Nora-Jane is actually quieter, more introspective and about as far from Bernadette as you can get. "Peter [Mullan the director] was great, he gave all the time in the world. He really knew how to explain things." She recognises that her character is pretty and tough: "She knows what it means to be in an institution, she knows about the routine. She also knows she's pretty deep down and realises what this means to the nuns." Yet Nora-Jane also sees a bit of naivete in Bernadette, "the violence comes as a real shock to her." The violence came as a bit of a shock to Nora-Jane. "In the scene where Bridget [played by Geraldine McEwan] is whipping the backs of our legs Geraldine got really into it. We had padding to protect our legs but the stitching on mine burst and it was at that point that Geraldine really let rip and I was in shock how much it hurt." Mullan saw the look on her face and asked if the look was real, when she assured him it was

M A G D A L E N E
with the story was a bit of a mystery to him until just recently. "At the time of making it, I didn't know why I was so caught up by this story more than any other, Now I genuinely believe that it was because of my own upbringing. It wasn't just the Church, but also an oppressive father. The door was always open but just where could I go?" This goes a long way to explain the scene where Margaret (Anne-Marie Duff) has an opportunity to flee. "It's a kind of, 'better the devil you know' kind of situation. That scene was positively heartbreaking." It is discovering that kind of connection with his audience that Mullan feels so important: "There has to be a grounding in something you visualise." With this in mind he introduces the viewer to absurd little highlights like the priest filming the girls at a sports day, or Crispina reaching for a word she cannot quite remember. "There is madness, solace, and absurdity, there cannot be a film without that kind of humanity. I am quite fond of that kind of craziness." Although the story is a very Irish one Mullan chose to film it in Scotland. "It was purely a logistical decision" he said firmly putting paid to rumours of not being allowed tofilmin Ireland. "There was a convent that wasn't in use,

AS THE harrowing story of life inside the Magdelene Laundries The Magdalene Sisters is released, Michele Viney talks to Galway actress Nora-Jane Noone and director Peter Mullan about the film. he was thrilled. We'll keep that take!" he said. All the acting that NoraJane has done up to this has been a couple of school plays and been a dancer in a couple of the Renmore Panto. Yet Lenny Mullan (Peter's brother and casting director) obviously saw some magic spark. Peter Mullan has managed to transfer that spark through the camera onto the screen. Yet sensibly Nora-Jane is continuing with her studies in undenominated science where she is in her second year in NUI, Galway. At 18 there is plenty of time. "I want to get my degree first and do as much acting as possible in between. And If I'm lucky enough to get a job like this, that would be great." She was only 17 while filming The Magdalene Sisters: "We started filming just after my Leaving Cert. It was very concentrated very tough. For the first two weeks I spent it with my eyes wide open, taking everything in." At first she wasn't aware what illustrious company she was in. "I didn't realise who Geraldine was, how brilliant and how respected. She was a lovely warm person, even when she was giving us a whipping." Nora-Jane was fascinated by how the other actors worked. "Most of them were a good bit older than me so I used to just watch how they would go off to find their own little space and get into character." In one difficult scene where a pair of nuns are mocking the naked bodies of the girls, Nora-Jane was very glad of the support of the cast and crew. "The crew kept on telling us how brave we were and even the extras stripped off, giving us moral support." Although Nora-Jane knew that the Magdalene laundries existed (amazingly that last one only closed in 1996) "I didn't have an idea of half the things that went on, Peter has actually toned down a lot of the stories, but everything you see in the film actually happened." Peter Mullan talks Scottish writer, director.and actor Peter Mullan had only a short time in Dublin, so I only got to speak to him over the phone. In his soft Scottish burr it is obvious that he is passionate about his film's subject matter. "This is the girl's story," he told me, "the film is to redress the balance, to counteract the Church's point of view. It was all based on ignorance, girls could be taken purely on suspicion. The nuns were conditioned to be brutal, if they showed any compassion to the girls they were sent away." In fact during the course of the interview he referred to such nuns as storm-troopers. His strong fascination

we had access to shoot there at a very small cost." Also helping to keep the cost down was casting himself in the role of an irate father returning his run-away daughter. "I'm the cheapest

actor I know, although hand on heart I didn't expect people to recognise me." So where is he happiest? Writer? Director? Actor? "Definitely as an actor, it's the most fun and you get to

go to the bar at night. Directing is extremely hard work, but very rewarding watching actors excel." The Magdalene Sisters is reviewed on the cinema page.

Galway treat
MAYBE ADULTS can't go trick or treating, but the Halloween party at Nimmo's Wine Bar gives them the chance to act out their decadent dreams. Nimmo's proprietor Harriet Leander explains how her Halloween party has evolved into a very grown-up affair over the last six years: "All our staff and customers say it's the best night of the year. Everyone uses so much imagination with their costumes. You don't have to spend lots of money, or even come as anyone! Just look.. .different. "One year we had two 17th century noblemen, with fine velvet jackets and embroidered lace cuffs talking to a surfing pumpkin! Another time, a man dressed as a giant teddy bear gave his wife the shock of her life, when he removed his bear head to reveal his face had been

ALISON BALSOM, one of Britain's leading trumpeters, will join the Irish Chamber Orchestra for a concert in the Radisson SAS Hotel en Wednesday November 6 at 8pm. This concert, part of Musk for Galway's 22nd Concert Season, is the first classical music event to be held in the Inis Mor Ballroom of the Radisson. It will include music by Rachmaninov and Balsom will join the orchestra for concertos by Marcello and Neruda. Balsom made her debut this summer at the BBC Proms and toured Europe as soloist with the Australian Chamber Orchestra. She won the Brass Final of the BBC Young Musicians Competition in 1998, the Premier Prix for the "most beautiful sound" at the Maurice Andre International Competition in Paris in 2000 and she is currently studying

with celebrated trumpeters Hakan Hardenberger and John Wallace. The Irish Chamber Orchestra has recently appointed a new leader - London bom Katherine Hunka. Assistant leader for the past two years, she has led the orchestra on several occasions and directed the opening concert of last year's Belfast Festival at Queen's and this year's South Bank Centre in London. The concert will be conducted by Dermot Dunne, who led the opening concert this season in the Motorpark with the music of Piazzolla. He also played with Concorde in Sound Shapes in this year's Galway Arts Festival. The concert is sponsored by Lohans of Prospect Hill. Tickets are 16 from Mulligan, Middle Street and Music for Galway 091-705962.

secretly made up as a vampire, with bright red blood on his teeth!" Tonight's tickets are 20 on the door, for which you will receive a hot and cold

buffet, live music, and as fine a collection of funloving eccentrics as any lost Halloween soul could hope for.

Compiled by Kernan Andrews Tel: 091 530913 E-maH:kandrews@galwayadvertiser.le All news items must be in fry 1 2 noon Tuesday.