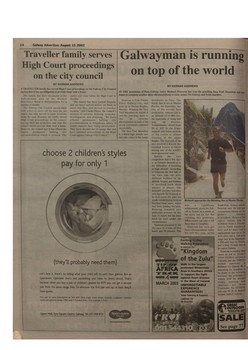 Taer u pceiGalwayman is running rvl or y srns e fmr eds a lo ee i vg Hh C ti cuc on top of the world g te cy oni in h t o l
BY KERNAN A N D R E W S BY KERNAN A N D R E W S IN THE mountains of Peru Galway native Richard Donovan has won the gruelling Inca Trail Marathon and now hopes to complete another three ultramarathons to raise money for Galway and Irish charities. Donovan is from Forster Place, Galway city, and grew up in Glenina Heights, Mervue. Winning the Inca Trail Marathon on August 8 sees his year-long quest to run an extreme ultramarathon on each of the seven continents continue successfully. The Inca Trail Marathon is a 46km high altitude race that takes place in the Andes mountains in Peru. The finish line is set at Machu Picchu, the legendary lost city of the ancient Inca civilisation. Athletes ran to an altitude of 14,000 feet, the equivalent of being half way up Everest. Temperatures varied from 80 to 90F in the lower tropical rain forest sections of the course to almost freezing at the upper heights. The final part of the race involved a descent into clouded forests to finish among one of the world's most spectacular ruins. Before the race competitors had a few days to acclimatise themselves to the difficulties of breathing at high altitude. According to Donovan the first half of the race was the most difficult because of the altitude heights and because it involved such steep ascents in places. The downhill sections had their own hazards for Donovan as he had spent the past six weeks rehabilitating from an iliotibial band injury, which had been paining his knee. Running downhill puts particular pressure on this type of injury but the knee held up well under the circumstances. Donovan prevailed to win the race in a time of five hours and 50 minutes. This A TRAVELLER family has served High Court proceedings on the Galway City Council saying that it has an obligation to provide them with a home. The family has been encamped in the Ballymoneen area on the Western Distributor Road in Knocknacarra for a number of months. The Galway City Council served them with notice to move off the area but the family has only moved to other locations along the road. Recently, the family served High Court proceedings on the council saying they are homeless and that the council should provide them with a home. However, the council says it has offered the family permanent halting site accommodation which it refused. The matter will come before the High Court in October. "The family has been parked illegally and we have served notice on them to move but they just moved to another location," said Ciaran Hayes, the council's director of services, housing, economy, development, and planning. "We have offered permanent halting site accommodation in Doughiska where it would improve their living environment. They have decided not to accept that and have initiated proceedings in the High Court against Galway City Council."

Richard approaches the finishing line at Machu Picchu was a significant achievement, given his falloff in fitness as a result of the injury and the fact that trekking this particular 44km course can take a full three days to complete. Donovan has now got three ultramarathons under his belt this year, at the South Pole, Sydney, and the Peruvian race. He will now concentrate efforts on the globe's northern hemisphere. However his injury forced him to withdraw from a 100-mile race in North America in July and he must find a replacement race for it. He will also run a 100-mile stage race in the Himalayas, a 208-mile race in Tunisia, and a final 35-mile race in his native Galway. Donovan is running these races in aid of GOAL'S street children project in Calcutta and the GSPCA's animal sanctuary in Killimor, Co Galway. He is appealing for donations to be made to the following account, the proceeds of which will be divided evenly between both charities: A/C Seven Continents, No 45726438, sort code 90-38-40, Bank Of Ireland, Salthill, Galway.^

"Kingdom of the Zulu

(el pa n h ) t y ob e tm h' ry de bl
Let's face it, there's no telling what your child will do with their glasses. But at Specsavers Opticians that's not something you have to worry about. That's because when you buy a pair of children's glasses for 7 5 you can get a second pair from the same range, free. So wherever the first pair end up, at least they'll have spares.
Free pair t o s a m e prescription a s first with Ultra single vision lenses. Excludes sunglasses, t i t a n i u m styles and optional extras. Offer ends 5 O c t o b e r 2002. Only available in R.O.I.