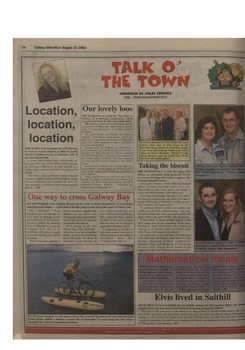 Location, location, location
THE HABIT Galway people have of referring to Galway G a r d a Station as Mill St G a r d a station is leading to a lot of confusion, Talk of the Town has learned. It seems that in many cases when people are accessing 999, they ask for Mill St station and get put through to Millstreet in Cork instead -- a station where even the proverbial cat could not be swung. This led to other problems when a load of stationery supplies destined for the Galway station arrived at Millstreet and swamped the place. So now you know, it's Galway Garda Station and not Mill St. -- DV

Our lovely loos
THE SEARCH is on to find the 'Top Toilet' in Galway in a n a t i o n a l competition which rewards local towns for first class public toilets. The initiative, sponsored by Pharmacia and the Association of Municipal Authorities of Ireland aims to raise awareness of bladder control problems. All public toilets are eligible for entry in Ireland's 'Top Toilets' competition. And if you think you've found the best toilet in Galway then you won't mind squatting to take a two photos (exterior and interior). Entries will be judged on cleanliness, accessibility, structural design and overall impression. The winning loo will be awarded 2,000 towards the "continued enhancement of the town's public facilities" and four regional runner's-up will receive Ireland's Top Toilet plaque. Rumour has it Galway city's newest pub - the Living Room - has the coolest loo in Galway city? Then again, maybe you'd prefer the superloos in Eyre Square? Voice your opinion for the best place for a splash by getting an entry form at Ireland's Top Toilets, 5th floor. Huguenot House, 35-38 St Stephen's Green. Dublin 2. Deadline for submissions is September 16.

Taking the biscuit
T H E SPANISH have a taste for t a p a s , t h e Italians are passionate about pasta, the French are barmy for baguettes, and it appears the Irish are crazy for cookies. Irish cookie monsters chomp their way through almost 19 million Maryland Cookies every year. Placed side by side, that's almost the length of Lansdowne Road Stadium, 9,500 times over. And forget being hungry enough to eat a horse, the Irish are troughing the equivalent in weight of nearly 150 horses in Maryland Cookies alone that's a massive 200 tonnes a year! To celebrate Ireland's passion for cookies, the search is on for Irish cookie monsters - kids who say and do things that make you laugh, scream and shout, or those who quite literally 'take the biscuit'. If your child's a cheeky monkey, and he or she have simply done or said something which 'takes the biscuit', they could be in with a chance of winning an all expenses paid trip to theme park Alton Towers in England for a weekend. To enter, write in no more than 100 words how your child 'takes the biscuit'. Send entries to Orla Doolan, Maryland Cookies competition, Flanagan's Sales and Marketing, D3 Riverview Business Park, Nangor Road, Dublin 22 by September 9 or e-mail Orla@flanagansdirect.com

One way to cross Galway Bay
ON SEPTEMBER 7 the Galway Branch of the Irish Arthritis Foundation is organising something quite unique -- a local man is literally going to cycle across the waters of Galway Bay. Pat McGlynn from that Pat was almost crippled with says, "and it should take two Knocknacarra will attempt to arthritis a year ago, before a life hours, wind and tides permitting. cycle from the Mortello Tower changing hip replacement enabled This venture has been a dream near Kinvara to the Ladies' him to take up all the physical of mine for the last five years, Beach at Salthill on a regular activities he once enjoyed. and now that I'm fit and well bicycle attached to a special again, this is the time to do it!" He is taking on the ICE pontoon' float. The act of Galway Bay Bike Challenge To support him in his drive to pedalling will power a small which has never been attempted raise badly needed funds for the propeller moving the whole before - to prove to himself that Galway branch of the Arthritis apparatus. he is well again. "It's about 10 Foundation phone Ray What's even more amazing is kilometres across the bay," he O'Connor at 087 2401133.

HAVING JUST a symbol as name worked for a while ft Prince and now a new Galwi restaurant is following in tl footsteps of His Purple ness.

Elvis lived in Salthill
Pat McGlynn who plans to cycle across Galway Bay from the Martelh) tower near Kinvara to the Ladies Beach, Salthill, a distance of about 10k on September 7 to raise money for The Galway Branch of the Arthritis Foundation of Ireland.

ELVIS PRESLEY lived in Salthill, but not Salthill, Galway. Yet this legendary figure, who change popular music may have known more about Galway than perhaps he realised. This year is 25th anniversary of the death of the King of Rock'n'roll and a letter-writer lo this papa Paul Walsh, has made some interesting observations about him. Elvis was born in Tupelo, Mississippi a January 8, 1935. on the Old Salthill Road, now Elvis Presley Drive. In 1966 Elvis met one of Ireland' own great entertainers, Brendan Bowyer on the set of a film he was making at the time and sang a few I* of 'Galway Bay' to the Irishman. - KA