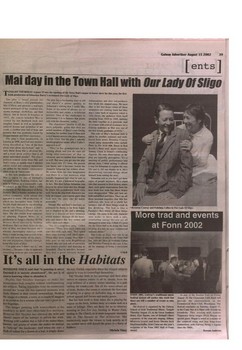 It's all in the
SOMEONE ONCE said that "a painting is never finished it is merely a b a n d o n e d " , the a r t is of course knowing when to abandon it. Phyllis Del Vecchio manages to make her watercolours look complete without overdramatising her subjects. Taking inspiration from the countryside around her house she has captured moments with birds, framed in their natural surroundings. Holding the image of a thrush, a wren, or a couple of magpies is no problem for a woman who can lure a great tit to her fingertips.

the eye. Useful, especially when her winged subjects appear to want to camouflage themselves. Del Vecchio both in her paintings and their titles strives to capture nature in all its moods, from the crisp stillness of a snowy winter morning, to a gale lashing the countryside. Not all the watercolours arc of birds, Broken Out seems to celebrate the first signs of spring as a spray of daffodils sing in luminous yellow against dull brown and murky green. But her best work is done when she is playing the voyeur on the birds, hidden away in a stone wall or a The danger painting with watercolours is the mass of foliage. They are there for us to observe: tendency to drift into chocolate-box territory. roosting in Two For Joy, feeding in Winter Fare, However Del Vecchio has allowed the wild and nesting in The Clutch, or in more enigmatic moments She chaotic nature of the habitats to inform her work. like in The Savant or The Aristocrat. Working with a palette that is full of the muted blues, instinctively urges the viewer to look quietly as if browns, and greens of winter she makes no attempt any sudden move will disturb the peace in a flurry of to "tidy-up" the landscape. And when she uses a feathers. MJci flash of colour for a flower or a leaf, it simply draws

As part of the Session Trail on Friday August 16 The Crossroads Ceil/ Band will provide the entertainment in the Commercial Boat Club. Woodquay. The festival concludes on Saturday August 17, m the Crane Bar at 6.30pm with Session na aAmhraa. This session will feature Tippcrary born siagcr Dick Hogan as apodal guest. Hogan is noted as a master of the comical song and has long-time with Galway, facing a regular the 1960s. Andrews