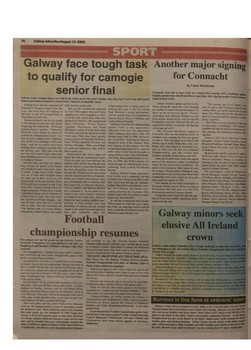 Galway face tough task to qualify for camogie senior final
Galway senior camogie players are still in the shake-up for this year's double when they face Cork in the All Ireland Senior semi-final at Limerick's Gaelic Park, Limerick on Saturday (2pm). Galway have already captured the National Camogie League title this year, and now they are hoping to advance to the All Ireland final in September in Croke Park. Galway defeated Cork by five points in the National League this year before displaying fine form in the All Ireland quarter-final against Limerick. However Cork cannot be taken for granted at championship level. Last year it took a replay before Tipperary saw off the Cork challenge at this same stage, and the Leesiders have been building their underage structure over the last few years. They have won the last two All Ireland minor titles and their rebuilding process of several years is coming to fruition. little freedom in that area. This year the Leesiders are captained by Una O'Donoghue who last Friday captained her club Cloughduv to victo ry in the Cork senior final when they defeated St Finbarr's. The experienced Mary O'Connor, Vivian Harris, Caoimhe Harrington and Paula O'Connor, a sister of Cork hurler Ben O'Connor, provide the backbone of the Cork team. They also boast quality young players in Rachael Moloney, Emer Dillon, Jennifer O'Leary and Gemma O'Connor. With a good blend of youth and experience, they will be hard to push over. Tribeswomen have a strong chance of making their way to the All Ireland final. However a quality performance will be needed from the experienced Sharon Glynn, Denise Gilligan, and young Aislinn Connolly. Galway's record in the championship against Cork is not impressive, although Cork were the opposition when Galway won their only All Ireland senior title in 19%. However the Leesiders dominated Galway thoughout most of the nineties. They beat Galway in the county's first All Ireland final appearance in 31 years in 1993 when Cyril Farrell brought a young Galway team to the final hurdle. After Tony Ward guided Galway to vic tory in 1996, the Rebel county got sweet revenge the following two years, capturing back-to-back All Ireland honours.

Another major signing for Connacht
By Linley Mackenzie
Connacht were due to open their new season last evening with a challenge against English premiership side Bristol Rovers just days after signing another former interna tional to their ranks. "The average age of our squad is just over 22 and in order to bring on and develop young talent you need experience around them. Eric Peters will provide that and a lot more to Connacht and his signing is a major boost," said Nel. Eric Peters was not expected to take part in last night's challenge. Nel named a youthful side that included several new sum mer signings and featured six players mak ing their debut at this level, full-back Justin Meagher, winger James Norton, centre Dermot O'Sullivan, fly-half Shane Moore, prop Fabien Boiroux, and No 8 John O'Sullivan. However Nel will be expected to name a different side when Connacht take on Warren Gatland's Wasps in London on Sunday in the second of three warm-up games before the start of the Celtic League against Scotland's Borders. The team named t o play the Bristol was: Justin Meagher; James Norton, Dermot O'Sullivan, Martin McPhail, Ted Robinson; Shane Moore, Chris Keane; Dan McFarland, Jerry Flannery, Fabien Boiroux; Alan Matter. Rowan Frost; Michael Swift, John O'Sullivan, Paul Neville. Replacements: Ronan McCormack, Henry Bourke, Peter Bracken, Colm Rigney, Mike Walls, Tun Allium. Oisin Grennan, Wesley Maxw well. Warwick Waugh, Eric Elwood.

Former Scottish captain and No 8, Eric Peters, joined the squad this week, bringing the number of senior international players to three in the provincial squad. Former Australian lock Warwick Waugh was the first major acquisition, and alongside Connacht's own Eric Elwood, the trio are expected to bolster a Connacht side that has an average age of 23. The 33-years-old Peters, comes to Connacht after an outstanding career in Scotland since winning his first cap against Canada in 1995 and going on to play in the World Cup in South Africa that same year. Peters was a key player in Scotland's suc cess in what was the last Five Nations Championship, and has toured New Galway know they have a huge test Zealand, Australia, South Africa, and USA. ahead, but with the inspirational Louise Although Scottish bom, Peters has played Curry in goal and marshalling the most o f his domestic rugby in England However this year they are without defence, Cork should also find the task where he has lived since childhood. He long-sen ing star player Lynn Dunlea difficult. Davitt's young Rita Broderick spent seven seasons at Bath where he won who decided to retire from inter- coun has been displaying some fine form the League Championship, Pilkington Cup, ty action. A huge loss to Cork, Dunlea during the championship and along Galway defeated league specialists and European Cup, having joined them from was one of their main strengths when with the experienced Olivia BroderickCork in this year's campaign, but the Cambridge University where he won two the sides met in three successive All Forde and Pamela Nevin-Boyle, they Leesiders have always been able to take Blues and was captain in 1992. Ireland finals in the late nineties. Fiona are a formidable unit in defence. The that extra step during the champi Two seasons ago he helped Harlequins to O'Driscoll has returned to the Cork half back line of Martina Haverty, onship. They had comprehensive victo European Shield success before moving lo team after taking a break from the Tracey Laheen. and Martina Harkin ries over Limerick and Antrim, over Rotherham who this year won the First league campaign. O'Driscoll is a vastly have continued to lay the platform for coming Limerick by 22 points while Division title and the Powcrgen Shield. experienced player and her presence is much of this year's success. Haverty Galway had only five points to spare Connacht coach Steph Nel said the sign a huge asset to Cork. They also boast and Harkin have been most effective against the Shan ironside rs. ing of Peters was another significant devel the experienced Eithne Duggan. cap behind the hard-working midfield part It will take a mammoth effort for the opment for the side. tain of Cork when they last won the nership of Aine Hillary and Ann Tribeswomen to reach this year's final, title in 1998. She still marshalls the Hardiman. If Galway can get enough but if they do, then they will be well on Cork defence and as a result Galway supply to the attack from the half back track lo add the All Ireland crown to the shaipshooter Sharon Glynn can expect line and midfield, then the National League already won.

Football championship resumes
Two places are up for grabs in the Galway Senior Football C h a m p i o n s as Annaghdown will take on Owgfcterard and Dunmore McHale's win play Caitra this The Annaghdown v Oughterard game marks a historic first. Il will be the first senior championship game at the newly revamped Pearse Stadium. Annaghdown will take on Oughterard on Saturday evening at 7pm in the first round proper. Playing the game at Pearse Stadium should add extra interest in this game where the experience gained last year by Annaghdown should be expected help them advance over this year's senior debu tantes Oughterard. The winners will play Oranrnore/Marce in the quarter-finals. Few accolades can be given lo the organisers of the sec ond game. Dunmore Mc Hale's face Caitra a 2pm in Tuam Stadium on Sunday, clashing with the All Ireland Minor Hurling semi-final between Galway and Kilkenny, which is to be televised. This game will be an intriguing clash, and if Cakra play lo their potential, they could cause an upset and send Dunmore McHalc's packing their bags. These Iwo games and the quarter finals of the folk.wing week are all arranged under a cloud of speculation around the KiUeierin club When Killererin played Aa Cheaihru Rua some weeks ago, the ctunqaotts of 1999 fought back bravery lo level and bring the game lo extra time. However in a bizarre situation Killererin refused lo come out for extra time aad Aa Cm fa.ii Rua were subsequently awarded the gantc. A KiilctT-nn appeal lo Galway County Board failed oa a at kaii. day aad there is now spectdarina that Killererin are seeking to get the Galway Senior Football Championship stopped until they get a second appeal heard by Connacht Council. Speculation is strong that Killererin are lo seek legal advice this week to get a court injunction lo stop the championship if the quarter finals go ahead.

NO EASY DRAW FOR AN CHEATHRU RUA
The draws for the Tommy Varden Galway Senior Football Championship took place on Monday night at Tuam without Killererin included. Killcrerin's appeal to the county board was thrown out on a technicality, following their failure to turn out for extra time in their game with An Cheaihru Rua who were awarded the victory. However the Gaeltacht side is not in for an easy draw, having been pitied against Corofin in the quarter-final. There are still two first-round games to be decided Annaghdown v Oughterard and Dunmore McHales v Caitra. These games arc expected to be played this weekend. Oranmorc/Maree are drawn against the winners of Annaghdown and Oughterard. while surprise packets M i l l i o n n are drawn against the winners of Dunmore McHales and Caitra. Mouiahcllew/Mo>lough in the other quarter-final. In the Intermediate Football Championship quarter-final, Gtyask have been drawn against Corofin; CarnarCashel face Cortoon Shamrocks. Caherlistranc will meet Honour, and Claregalway have been drawn against St Grcllan's

Galway minor ladies' footballers face a tough challenge on Saturday when they on Monaghan in the All Ireland Minor Football Championship final in " Pearse Park at 1pm. Ladies football has made steady progress in recent years, but All Ireland honours eluded them thus far. Saturday's challenge will be tough as Monaghan. who have al won the Ulster Senior Championship, have a number of prominent minor players on panel, including Una and Teresa McNally. Aisling Tiemey, and Orla Callen. However Galway too have a large portion of their team on the successful county j side. This year Galway have won five trophies, the Connacht u-14, u-16, minor, junio National League division 2. but an All Ireland Championship would be a just reward ft elf oris of recent years. Managed by Con Moynihan. Galway will be aware that Monaghan arc a compe team, necessitating a huge effort if Galway are to bring the silverware home. In Con ihe minors swept aside all opposition, but in the All Ireland semi-final they met their I team Meath. In a thrilling encounter, Galway eventually prevailed. On Saturday the) he hoping lo do the same again