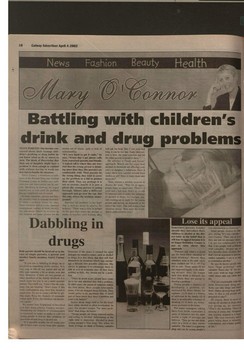 MANY PARENTS who become con cerned a b o u t t h e i r teenage chil dren's drinking or drug habits do not know what to do or where to turn. The shock of discovering that their son or daughter might have a problem is often enough to contend with without having to work out how best to handle the situation. Gerry Cooney, a treatment co-ordinator at the Rutland Drug and Alcohol Treatment Centre in Dublin says early detection and intervention can be cru cial. Speaking in Galway, he urged parents not to wait until the problem has got completely out of control. In many situations, parents and fam ily members tend to respond incorrect ly when a problem arises, he says. Some overreact and drive the situation underground leading to more secrecy, lies and deceit. Others try to cover up the situation and make excuses for the

Battling w i t h children's drink a n d drug problems
person out of shame, guilt or lack of understanding. "It's very hard to get it right," he says. "Every day I get phone calls from concerned parents and friends. A typical call is where they are wor ried that the young person is drink ing more than they [the parents] are comfortable with. Most parents do the wrong thing, they tend to cover up the problem in a bid to protect their child. They say perhaps it is not so serious, maybe it is j u s t a phase the young person is going t h r o u g h . O t h e r s take a different approach and go over the top. But this only drives the problem under ground." Ignoring the problem in the hope that it will go away is unwise, he believes. "There was a view in Ireland in the past that when the person is ready or reaches rock bottom, they will ask for help. But if you wait that long, it can be too late. Early interven tion is best. Air your concerns and let the other person respond to these." He advises a "look and listen" approach. Watch out for signs how alcohol or chemicals are affecting your son's or daughter's behaviour. Does it make them less careful around their studies or job? Does it make them take shortcuts? Then, choose a suitable moment to discuss the issue. "Wait for an appro priate lime to intervene. There's a good and a bad time. Don't try to talk to someone who is under the influence of alcohol or drugs, for example, par ents waiting up at night for the young person and having an argument at the end of the stairs. This just makes a bad situation worse. Wait until (he week end or some suitable time."

Dabbling in drugs
Both parents should be involved or in the c a s e of single p a r e n t s , a p a r e n t a n d another family member, Gerry Cooney says . "If you son is dabbling in drugs, he is involved in something pretty serious. It is very easy to fob off one parent and say he only uses cannabis a bit or drinks now and then. However, if there are two parents or other members of the family involved, it is much easier for you to set a more accurate picture. You could say, 'I don't like the com pany you are keeping'. Don't panic if this early confrontation may elicit fear, denial or aggression. Try not to create a divide by get ting angry. Keep tbe channels of communi cation open. If not. the situation can deterio rate rapidly." No matter how frightened or horrified you feel, keep talking. Cooney stresses. However, if the space is created for open dialogue on sensitive issues, such as alcohol or drugs, it is less likely that they will find themselves in situations which may encour age a descent into possible addiction. My advice to parents is to encourage them to talk to you or someone else. If they have nothing to hide, this should not be a prob lem. 'Twice in seven years, people have come up to me and admitted they had a problem. In other cases, the parent or someone makes the first move. Most people reluctantly resist. A lot are dragged along for help. They would prefer to be anywhere else. A small part of them know they have a problem and w ant to be helped." Stories about drugs tend to hit the head lines while alcohol is often overiooked, he says. Yet alcohol creates "far more prob"Young people are being exposed earlier and earlier to alcohol. Information at the right time is important. Alcohol is most young people's first drug. Yet, when we think of drugs we think of Ecstasy, cannabis

Lose its appeal
Sometimes p a r e n t s w o n d e r should they introduce their children to alcohol at the din ner-table in the belief that it will lose its appeal because it is no longer forbidden. Cooney is not so s u r e a b o u t this approach. "Parents ask what's a good age for them [their children] to start drinking? Should they introduce wine at the table when their children are 14 or 15? I'm not so sure. Those under-18 are not supposed legally to be drink ing alcohol. Also, the longer their first drink is delayed, the less likely they are going to develop a problem." Young people's chances of developing a problem are increased by three things, he explains. (1) If there is a history of addiction in the family (2) if there is an unhealthy tolerance of drinking (3) if there are dishar mony problems in the home. For many teenagers, taking their first drink represents a sense of initiation into the adult world, a right of passage, he believes. "They go out and drink cider in a field or they smoke cannabis. The latter is a gateway drug and can be young people's first introduction to chemicals." Some people dismiss its dan gers, saying "It's only cannabis", says Cooney. "They say at least they are not on stronger drugs. I'm not too comfortable with that. I see people with problems with cannabis. People say its less horrific than alcohol. But that's not an argument to decrim inalise cannabis. I see it as one to criminalise alcohol." He says he knows people who have "huge problems" with cannabis. Some take "E" for sev eral years with no huge impact while others take one tablet and die. 'I'm not comfortable with the term recreational drug-use. Some can take drugs and leave them. Others develop huge prob lems. Is this a risk people are prepared to take?" Of course, there is more to staying off alcohol or drugs than just giving up, he stresses. "That's the hardship. There is missing it every day. Stopping and staying stopped is a huge part. The real recovery takes place when there is serenitycontentment, and a better quality of life."