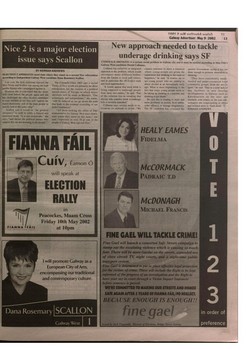 ELECTION CANDIDATES must state where they stand on a second Nice referendum according to Independent Galway West candidate Dana Rosemary Scallon. Last year, the Irish electorate rejected the Nice Treaty and Scallon was among the high profile figures who campaigned against it. However she is concerned that the treaty will come before the people again and she has challenged the other election candidates to state whether or not they will "uphold the stated democratic will of the Irish people or merely bow to the party whip". Scallon said it would be "the greatest arrogance" to seek to ratify a flawed and unrevised treaty. "It is anti-democratic," she says, "and shows the political parties who support this are not listening to the people." The Connacht-Ulster MEP says a second Treaty of Nice would not primarily be about enlargement, but the creation of a political united states of Europe in which major decisions will be made in Brussels. "Our sovereignty and independence," she warns, "will be reduced as we go down the path that leads to the eventual overriding of our Irish Constitution". "AH those seeking the office of Dail representative for Galway West must clearly state where they stand on this issue," she said, "especially as over 58 pr cent of the people of Galway West rejected Nice."

UNDERAGE DRINKING is a serious social problem in Galway city and it must be tackled according to Sinn Fein's Galway West candidate Daniel Callanan. Callanan has called for an integrated cannot continue to have a situation present Government saying it has not approach to the problem, which would where young people are given the done enough to promote alternative to encompass many different bodies, impression that drinking is the route to drinking. from the Gardai to local pub owners, happiness," he said. "It worries me to "They have consistently under and in particular the off-licence trade see young people who are starting to funded and under-resourced local and local supermarkets. abuse alcohol at an increasingly early community groups, from the arts to "It would appear that most drink is age. What is most frightening is the sport," he said. "Due to a total lack of being supplied to underage people fact that many young people seem to any facilities in new housing from these two outlets," he said. "Part be taking up drinking as a pastime and developments in Galway such as of the solution lies in ensuring that drinking to get drunk." Knocknacarra on the west and anyone who supplies drink to underage similarly with estates on the east-side, He said this is leading to more and kids is severely punished." more problems in society from public teenagers are congregating in alleys Callanan says society needs to re order offences to teenage pregnancies. and isolated areas to 'bush-drink'. Y-- examine its attitude to drink. "We The SF candidate has criticised the KERNAN ANDREWS

I will promote Galway as a European City of Arts, encompassing our traditional and contemporary culture.

Fine Gael will launch a concerted Safe Streets campaign to stamp out the escalating violence which is causing so much fear. There will be more Gardai on the streets, expanded use of close circuit TV, night courts, and a night-time public transport system. Fine Gael is determined to put in place effective legal protection for the victims of crime. These will include the Right to be kept informed of the progress of an investigation and the Right to have your say in court through a Victim Impact Statement before sentence is passed. WE'RE COMMITTED TO MAKING OUR STREETS AND HOMES SAFE AGAIN AFTER 5 YEARS OF FIANNA FAIL/P0 NEGLECT.