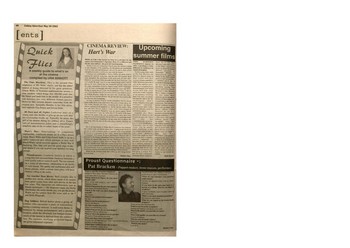 Quick ^Ucs
A weekly guide to what's on at the cinema compiled by UNA SINNOTT This is the second film adaptation of HG Wells' classic, and has the added appeal of being directed by his great grandson, Simon Wells. A Victorian mathematician invents a time machine which brings him 800,000 years into the future and lands him in the middle of a primitive war between two very different human species. However this version departs somewhat from the original plot. Samantha Mumba, in her film debut, stars opposite Guy Pearce and Jeremy Irons.
The Time Machine:

IRISH ACTOR Colin Farrell has been on a roll since he was cast in Joel Schumacher's Here, it's a different war, S U M M E R ' S THIS but the same uniform - the good old American army. blockbusters a p p e a r to offer something a little Similar to his role in Farrell plays the outsider looking in and champion of the underdog. He has grown up considerably different to audiences in search of escapism. since his days with and now he gets to show off his strengths as an actor as well as his ease with the camera. Forthcoming films such Looking less comfortable is Bruce Willis, far more used to playing the maverick action hero than the man who despairs about such characters. He and Farrell work quite well off each other. draw crowds with their However, on occasion Willis descends into the Jack Nicholson "you science-fiction scenarios, can't handle the truth" kind of acting. Farrell, being quieter, attracts while the eye far more. Farrell also has wonderful sparring scenes with twist on the superhero genre. the camp commandant played by Marcel Lures, which surprisingly Instead of straightforward work far more convincingly that those between Lures and Willis. Schwarzenegger-type action Hiding in among the rest of the cast of American soldiers is British movies, these films create actor Linus Roache (son of whole new worlds, hopefully Ken Barlow played by William Roache). Sadly the one actor who should have had a giving audiences something strong role was Terrence Howard. His pivotal role was at times, like more with their car chases his character, left floundering. and popcorn. Add to this the what-if As long as director Gregory Hoblit remembers that he should psychological, focus on the detail of the story rather than paint a broad canvas the drama. cautiouslyfilm works. Bravely and flatly portraying the abuse that Black Eminem's officers suffered in the armed forces, Hoblit and his writers, Billy awaited screen debut Ray and Terry George, look at a topic rarely acknowledged in and the summer could be American war movies. Detracting from the movie slightly, Hoblit entertaining indeed. feels it necessary to inject the noble idea of 'the needs of the many Arguably outweigh the needs of the one' to create tension when there were bags of it to go around anyway. He also throws in a gratuitous touch (to give the of Nonetheless he has some nice set pieces, the has full title) best being when the men on the train alert a bomber that they are comprehensively paved the POWs. way for new blockbusters.

Next up is The T Machine, a new fi

as The Time Machine and Minority Report Spiderman

Entertaining, if completely implausible, courtroom drama set in a Nazi prison camp. Bruce Willis and Colin Farrell battle it out in a rather contrived plot which attempts to deal with jBlack/White racial tensions against a World War II Ijbackdrop. This film will provide good edge-of-the^ a t drama if you can suspend your disbelief for long [^nough.
Hart's War:
!

Thunderpants: Lowbrow fartfest in which a young boy with uncontrollable flatulence befriends a child genius with no sense of smell. The two embark on a series of adventures, culminating in an Apollo 13 style rescue. The quirky and sentimental plot will please parents, while constant wind jokes will have children rolling in the aisles. Not Another Teen Movie: Well actually this is another teen movie, which draws much of its content from spoof scenes from other teen movies in the last few years. The characters are deliberately cast as blatant stereotypes -- the desperate virgin, the bitchy cheerleader, the cocky blonde guy, you get the picture. Watch out for cameos from 80s icons such as Mr T and Molly Ringwald.

Set in the last months of World War 11 Lieutenant Hart (Farrell) has a rather cushy job behind enemy lines. Leaping at the chance to get out, his jeep is attacked and he is captured. After being tortured he is sent to a prisoner of war camp. There, he is under the "command" of Colonel William McNamara (Willis) who is tolerated by the Stalag commandant Colonel Visser (Marcel Lures). Tensions are already high about the way McNamara organises his men, but it comes to a head when two Black officers are billeted with the enlisted troops. Hart tries to keep things from blowing up like a powder-keg and suddenly finds himself out of his depth when McNamara gets him to represent one of the Black airmen Lieutenant Lincoln Scott (Howard) for killing a fellow prisoner. Watch for the moment when Hart wakes up after being thrown from his jeep Michele Viney

should keep you happy in However, June. John Woo's might be more is interesting than it initially obligatory war movie, while appears. Although it is a fictionalis describes the life and times portrait of the surly but of a cartoon superhero, intriguing Eminem; will we director Sam Raimi has an find out why he's so angry intriguing track record, with all the time? All in all, films like cult horror The there's plenty of welcome variety on our screens this and consistently summer. attracting diverse audiences. Katie Moylan you

Spiderman, outChanging Lan in two weeks, will be equally girl on prowl with a twist widely distributed, so that movie Kissing Je you couldn't miss it even if
tried.

of HG Wells', classic sci-fi novel, in which the perhaps dubious presence of Samantha Mumba is balanced by the superb Guy hope to Pearce as the single-minded professor and time traveller. Another sci-fi fix is provides a available in the new film by Stephen Spielberg starring Tom Cruise and Colin Farrell. Released in July, depicts a vers the near future, where criminals can be assessed in advance of their crimes, and arrested before the crime is and committed. This futuristic thriller combines sciencefiction and car chases, when police officer Cruise discovers he too is a potential criminal he decides to make a run for it. film's those who can do For without action, more thoughtful films like Manhattan morality fable

PROUST QUESTIONNAIRE - : PAT BRACKEN
- Puppet-maker, stone-mason, performer.
Terrified [Pat was talking to me prior to performing his show Journeyman]. What do you consider your greatest achievement? Serving my apprenticeship with my father, Stephen. If you were to die and come back as a person or a thing, what do you think it would be? A great footballer, and I wouldn't shout at Mick McCarthy. What is your most treasured possession? My hammers and chisels. What do you regard as the lowest depth of misery? Being on my own Christmas Day. What is your favourite occupation? Stilting and chatting with people over a pint. What is the quality you most like in a man? Honesty. What is the quality you most like in a woman? A sense of humour. Who are your favourite writers? Primo Levy, Beckett, and Flann O'Brien. What is your motto? I can do it. Michele Viney What is your idea of perfect happiness? Sitting in New Quay, Kinvarra looking out to sea and a pint in my hand. Which historical figure do you most identify with? Miro, artist and sculptor, and I admire Muhatma Ghandi. Which living person do you most admire? John Hume and Seamus Heaney. Which is the trait you most deplore in yourself? My temper. What is your greatest extravagance? My rent. What i> your favourite journey? Up over the Burren. On what occasion do you lie? When I'm embellishing a story. Which living person do you most despise? Murderers who are still ai laiw WHAT ,,R > is the greatest love of your life? My partnt iona and my son Sean. When an here were you happiest? The day r .on was born and when I was in N Jobe house. I would you most like to have? :ian. a piano player. r current state of mind?

British horror about a group of s o l d i e r s who encounter a pack of werewolves during a training exercise. A well-wom theme is [{bolstered by strong performances and a spooky local ion. while the obviously low budget ensures ! much of the horror is derived from the soldiers' fear. The creatures, terrifying seven-foot bipeds. II are given minimum exposure.
Soldiers:
K