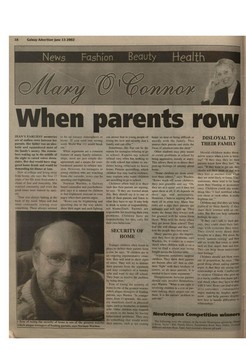 When parents row
JEAN'S EARLIEST memories are of endless rows between her parents. Her father was an alco holic and squandered most of the family's money. She remem bers waking up in the middle of the night to raised voices down stairs. Her dad would have stag gered home drunk and would be demanding his dinner at lam. Now at college and living away from home, she says the first 17 years of her life were lived under a cloud of fear and insecurity. She worried constantly and even the good times were marred by anxi ety. "Fear was always lurking at the back of my mind. Mum and dad were constantly rowing over something. There always seemed to be an uneasy atmosphere at home. If you said one wrong word, World War 111 would break out." While arguments are a common feature of many family relation ships, most are just simple dis agreements and a means for over burdened parents to release ten sion. However, for teenagers or young children who are watching from the outside, rows can be upsetting and frightening. Norman Warden, a Galway based counsellor and psychothera pist, says it is natural for children to feel frightened, insecure or even angry when their parents argue. "Rows can be frightening and upsetting due to the way adults show their anger and such fighting can arouse fear in young people of losing the love and security that a family unit can offer." Sometimes, this fear can be the reason for teenagers refusing to go to school. Experts say school refusal very often has nothing to do with school but relates to stu dents being reluctant to leave home. Parents quarrelling, which children fear may lead to violence, may explain why some children are unwilling to go to school. Children often feel it is their fault that their parents are arguing, he says. "If they are worried about this, they should say it to one or both of their parents and listen to what they have to say. It may help to think in terms of responsibility, not blame/fault. Parents are responsible for resolving their own problems. Children have no responsibility for this, only for their own behaviour." home on time or being difficult or moody with the family. This annoys their parents and shifts the focus of attention onto the child." Other students may play truant or create problems at school by being aggressive, moody or angry. This allows them to re-direct their pent-up feelings of anxiety about home. "Some children are more sensi tive than others," says Warden. "Rows wash off some children, they just grumble and say 'Oh, they are at it again' and it does not upset them at all. It all depends on their age and personality. However, I believe arguing affects them all in some way. Many fear rows are a sign their parents are unhappy and will split up. They worry the things they always took for granted will be taken from them. Who will be there when they get home from school? They fear life will change and they will lose the people they love most." Many parents give the impres sion they have no problems, says Warden. So, it comes as a major shock when children walk in on a row or find a silent war being fought across the kitchen table. "Arguments sometimes surprise children. They show their parents are human after all! Just as chil dren 'fight' with their brothers or sisters, so do most parents. It is normal to have some arguments." Disagreements between parents should only involve themselves, says Warden. "What is not right is involving children in a row or par ents taking their anger out on them. It is the parents' problem to sort out."

DISLOYAL TO THEIR FAMILY
Should children make them selves scarce when a row is brew ing? "If they stay, they let their parents know how they feel," he says. "If they want to get out, they should tell their mum or dad how they feel at another time when they are most likely to listen. Use I statements, these tend to be heard more than blaming or accusatory ones. Children could say some thing like 'I feel terrified when you shout at each other, it really frightens me.'" Children may feel they are being disloyal to their family if they share their worries with an out sider. But this can help unburden feelings, he says. "If they can't talk to their par ents, they could share their feel ings with someone they trust. They could write down their thoughts in a diary. Put down the words 'parents rowing' and then add on words that come to mind, such as fear, anger, hurt and loss. This can help them understand their feelings." Children should not blow rows out of proportion, he says. "The good thing about seeing parents argue is that they are seeing real relationships at work. Conflict can be creative. Children who grow up in a sterile conflict-free home get a real shock when they have to deal with it later. Rows can lead to pos itive o u t c o m e s - constructive anger, making-up, laugher, agree ment - and help parents display how best to handle difficulties in relationships."