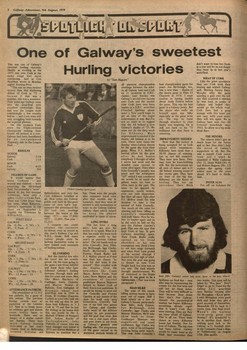 This was one of Galway's sweetest hurling victories. Hardly as exciting as the 1975 win over Cork at the same stage b u t more convincing. And as Con Houlihan wrote in Monday nights' Evening Press. "This was an even sweeter victory than that shattering defeat of Cork in '75 because if that was a surprise, this was a sensation. Four years ago Galway came into the semi-final with excellent credentials: they had won the League most convincingly a few months before -- and Cork were still only struggling back towards the topmost plateau. On this occasion Cork were the Triple-crowned champions seeking their fourth All Ireland in a row: Galway had been humiliated by an inexperienced Tipperary side in the League final..."

One of Galway's sweetest Hurling victories
by "Sam Maguire"

don't want to lose two finals in a row and let us not forget they beat us in last year's semi-final.