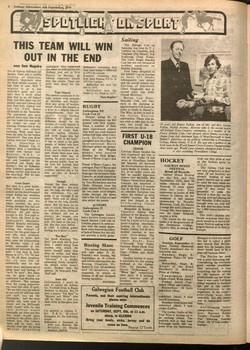 THIS TEAM WILL WIN OUT IN THE END
says Sam Maguire
For all Gaiway followers last Sunday there was a terrible feeling of d e j e c t i o n , deflation, depression when the final whistle sounded. It had been so near. With 7 m i n u t e s to go it was anybody's game and you can't have it much closer than that in an All Ireland final. And then there was the penalty miss and Gaiway had shot their bolt. Gaiway had lost her Fifth Senior All-Ireland in the 'Seventies. The experience gets more painful every time. But of all our five losses this was easily the closest we came to winning. Perhaps that is why t h e pain was almost numbing. What must have been the pain for the hurlers themselves? This year alone Gaiway have lost 4 finals in a row -- O i r e a c h t a s t o Wexford, Railway Cup to Leinster after a marvellous second ever victory over Munster, N.H.L. to Tipperary after a convincing win over Limerick in the semi-final and finally last Sunday's loss to Kilkenny after Galway's greatest ever hurling victory over Cork in the semi-final. Will we ever again win a final? Great Healer But time is a great healer. Even before I reached my parked car the dumbfounded empty feeling was vanishing and as the post mortems were pondered and the misses counted, the great feeling emerged that this was a title that slipped from us. Kilkenny did just about enough to win. That night in the Green Isle Hotel at the Gal way men's Association (Dublin Branch) welcoming Dinner Dance there was nothing but feeling's of sorrow for this great team of ours who were obviously way down in spirit. And then came the homecoming on Monday night. I was simply astounded at the magnificent welcome for the team. I had been in Eyre Square in 1 9 7 1 / 7 3 , '74, and '75. On all these occasions t h e air was full of melancholy and we had many pious platitutes abo lit rising again and feelings of "we'd be back". But there was no great depth of conviction. Last Monday was so different. The message from the young supporters was loud and clear. It spelt, "We are with you, we believe in you and we will stay with you until you are the Champions." And the team captain and team read it clearly and Joe McDonagh really meant what he said t h a t Gaiway would eventually get there and that t h e team would spare nothing in the effort. And I believe him. This Gaiway team will be back. And shortly. And like the young Mervu.e flagwaving contingent who supported the Warn so well, behind the Railway goal and in Eyre Square on Monday, all Gaiway supporters should stay the course. There are great days ahead for this team. Train Dispute The adverse comments re the train dispute were rampant on Saturday and Sunday. How any group of workers would choose this weapon as a lever in a dispute was not comprehensible. That the s p o r t s loving hurling followers of Gaiway and Kilkenny should be the victims of a trade dispute in such a selective fashion was the talk of Croke Park. Gaiway hurling followers will never forget this last minute "knife in the back". It was an insult to the plain people of Ireland who have been great supporters of CLE. and its workers in the past. Surely there must have been some other way of making the point known to the general public. Now we are told the football final won't be affected. One wonders whether this is for love or fear of Kerry's supporters! Enough Enough has been written about the game -- the pros and the cons, the why's and the wherefores. I'm not going to go through it all again. There will be plenty of time in the long months ahead. But let there be no talk of retirals. Meantime its on with the show. Defeated yes, deflated still but as always we remain ever hopeful. And we will stay with this team to the end felt like this once before -- in 1963. A Gaiway golden hurling era is about to dawn. "Poc Saor" The lettef attacking "Poc Saor" last week was in poor taste. I resent letters from readers who attack the writer himself rather than what .'he writes. And when such invective comes from a " p h o n e y " it is doubly nauseating. Paddy Geraghty, the alleged writer doesn't exist. Neither does the address, 38 Newcastle Park. 'Nuff said. Inter Alia Unfortunately I won't be here to attend the Gaiway Co. Football finals in Pearse Stadium on Sunday. But 111 have a deputy "Poc Saor" or "Maroon and White" who will be there to give you their views in this space next week. I'm grateful to Gaiway F. Bd. P . R . O . Michael Monaghan for the following details. Ballinasloe v Dunmore at 4.00 pjn. Referee: Pat P e r r i t e r . At Pearse Stadium, SalthiU.

The Zhivago Cup on Saturday was won by P. J. Lawless on Carabela, 2nd: Charleen (Pat Breen), 3rd: Scallywag (Tom Foote). The Coen Single Handed Cup was not run because of weather conditions on Ballinasloe contesting first Sunday morning. final since losing to Milltown Four boats competed in in 1971 by a point. the Salthill Cup on Sunday Dunmore contesting first in f o r c e 6 / 7 w i n d s , final since beating U.C.G. in subsequently two retired 1973 by 5 points. and the overall winner was Ballinasloe last won the P a r t i z a n of E m s w o r t h title in 1945. (Dave Fitzgerald) and in Ballinasloe won the second place was Aoife Under-21 Co. Final in 1977. (Donal Morrissy). "Sam Maguire" Moran Cup Race, Saturday 15th, will start early in the morning at approximately 9.00 hours in RUGBY order to finish at Moran's, Galwegians Nil The Weir, in time to join in C o r k C o n 12 the Oyster Festival Despite losing by 12 celebrations. Those who do points Galwegians can feel not wish to take part in the pleased with their display. race, but would like to Short a number of their cruise over can do so. more experienced players they held out until minutes before half time when Con's lock Declan Smith ploughed over for a fine try. International Barry McGann added the points. TENNIS Some of the 'Wegian Catn'ona Ruane became the players who deserve first Caonnacht girl ever to mention are Dick Ridge, win an Irish Under 18 title Donal O'Beirn (Capt.) and when at Fitzwilliam Dublin last Saturday she trounced Donal O'Beirn (Capt.), his the pre-tournament favourite colleague Paul O'Byrne and Laura Roche of Dublin 6-1, final trialist John Connolly. 6-2. In an earlier round she Amongst the forwards Mike had an equally impressive Casserly, as usual played his victory over the holder Miss heart out, aided and abetted Valance Owens from Belfast. by Tom Richardson and Joe Catriona has benefited a Healy. Minutes from the great deal from a 6 months final whistle McGann, with stay in the U.S. followed by his two stone extra weight, an extensive European tour broke through the home where she chalked up some side's line for a fine try and notable victories. She will also added the points. now lead Ireland in the forthcoming Junior JUNIORS International series. G a l w e g i a n s 23 Meanwhile on Sunday in Cork Con 6 Tipperary Gaiway were The Galwegian Juniors defeated in the Munster Cup had a decisive victory over a Final by Rushbrooke of much fancied Cork side in Cork by a score of 5-4 in our spine-tingling encounter. Glenina played in conjunc Leading by 4-2 after the tion with the senior game. Singles, Gaiway lost all three Both sides showed the effect doubles matches in very of lack of fitness but this did close three-setters. The not prevent a lively game. Gaiway team consisted of James Roche, Dave O'Donnell, Tony Pustie, Boxing Mass Catriona Ruane (fresh from her Fitzwilliam success), The annual Boxing Mass Claire O'Brien and Sheila will take place in St. Holland. Patrick's next Sunday, 9th September, at 10 o'clock, Another festival of tennis and will be celebrated by the is scheduled for this coming Boxing C h a p l a i n , F r . weekend at the Gaiway Robert E. Lee. All members Club. On Saturday the a n d e x - m e m b e r s , a r e annual " T r i b e s m e n " v. "Blow I n s " competition requested to attend in takes place. It is arousing honour of all our deceased great i n t e r e s t and all boxing members. members are invited to RINGSIDER. participate.

HOCKEY
G A LWAY M I X E D FESTIVAL B r e a k all R e c o r d s Gaiway Mixed Festival on t h e 8 t h a n d 9 t h September, 1979, have 56 teams entered for their Festival, 12 more teams t h a n last year. T h i s represents in excess of 800 visitors to Gaiway for the weekend. A last minute sponsorship by Murphy Breweries, Cork, Ely House Lounge Bar and Cullinane's Lounge Bar, have helped to ease the clubs' financial worries a little. The reason for the extra teams is in the generosity of the Dominican College, Taylor's Hill, in letting the

club use their pitch as well as the facilities given by U.C.G. T h e Gaiway Club who are very progressive in their ideas (if not facilities) are already thinking of next year's festival and in order to cater for more teams are asking teams competing this year if they would be prepared to make the festival a three day one by staying over and playing on the Monday. If they receive enough yeses the club will d o this and therefore break the 1,000 visitors barrier for 1980. T h e club's ultimate aim beside acquiring their own pitch would be to have a 100 teams Festival making it the largest festival of its kind in Europe. H a m p e r to win it but should she fail to collect a point and should Phil McDermott win the hamper, then there would have to be a play-off between them. T h e Pro/Am last week was a most interesting one. Considering the extremely good weather conditions t h a t prevailed, it was surprising that the scoring by the majority of the professionals was not better than it was--only 5 of them either equalled or bettered the par of the course. Congratulations to the organizers of the event-- e v e r y t h i n g went very smoothly and the course was in immaculate condi tion. Forthcoming ladies competitions -- Tuesday n e x t : Maureen Kenny Trophy--Fourball v. Par. The following Tuesday (Sept. 18) 18 hole s t r o k e hamper.