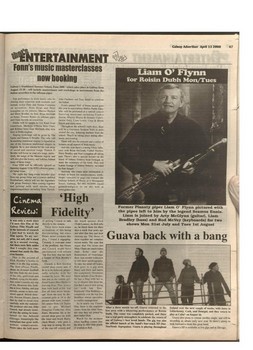 *ftiTIRT/IIMMHiT
FONN'S MUSIC MASTERCLASSES NOW BOOKING
Galway's Traditional Summer School, Fonn 2000 - which takes place in Galway from August 12-20 - will include masterclasses and workshops in instruments from the button accordion to the uilleann pipes. Top performers in Irish music who be sharing their expertise with students will include Jackie Daly and Verena Commins on accordion, Sean Ryan and Noel Lenaghan on tin whistle, Marcus Hernon and Harry Bradley on flute, Brian McGrath on banjo. Tommy Keane on uilleann pipes and Claire Keville on concertina. Fiddle will be taught by Liz Kane from Letterfrack, Michelle O'Brien from Clare, and Kildare born Aine McGrath who now lives in Ballyvaughan. Singing workshops will be given by Tim Lyons and Eamon O Broithe. Tim, who will be teaching traditional singing is regarded as one of the foremost traditional singers in English. He is also known for his vast array of social and satirical songs. Eamon 6 Broithe will focus on sean nos songs, partic ularly the songs of the Munster region, and will also give the history and folklore behind many of these songs. Fonn 2000 will be officially opened on Saturday August 12 by RTE's director gener al Cathal Goan. The eight day long event includes gigs from top group Altan and a concert entitled Troubadours, which will see the legendary folk group Sweeny's Men coming together and joining with well known local singer/songwriters including Sean Tyrrell, John Faulkner and Tony Small to celebrate the ballad. Fonn's annual Hall of Fame award goes this year to east Galway fiddler, Paddy Fahy, who will be presented at a special concert featuring musicians including Frankie Gavin, Martin Hayes & Dennis Cahill, Jackie Daly, Liam Lewis, Cora & Breda Smyth and many more. Throughout the school's eight days, there will be a Guinness Session Trail in pubs around the city, featuring teachers from the school. They'll be taking place during after noons and evening. There will also be concerts and a series of lectures on all aspects of Irish music. And this year there's a strong Ulster influ ence with Brian McGrath, Cathal Hayden, Harry Bradley and Noel Lenaghan all taking part. There's also a special lecture on the music of Johnny Doherty from Donegal, to mark the centenary of his birth. This will feature footage of Johnny Doherty, recorded by Pete Seeger. Anybody who wants more information or wishes to book for masterclasses, work shops, concerts or gigs can contact the Galway School of Music at 6 Mainguard Street, Galway, Tel 091-562099, email gsitm@indigo.ie or on the web at www.gsitm.com.

PLANXTY PIPER L I A M

Fidelity'
It was only a week since I'd seen this film at the Galway Film Fleadh and in the interests of research I just had to watch the film again. To my sur prise, not only did it stand up to a second viewing, but there were little asides that I caught this time around that made the film even funnier. This is the second of Nick Hornby's books to make it to the big screen. The first (Fever Pilch), about an Arsenal football fan who finds the two loves of his life, girlfriend and football, vying for his atten tion, wasn't exactly my cup of tea. However this, look ing at love, fidelity, and pop record-., seems to have uni versal appeal. British direc tor, Steven Frears, knew that he had to tread very carefully with the material. His producer and star, John Cusack. had already insist ed that the setting be trans ferred lo his beloved Chicago. Amazingly the transplant has gone well, without complications. Frears takes the bold move of getting Cusack to talk directly to the camera. There have been some accusations of this being disconcerting, but since Frears never overuses this ploy, I found it engaging. Certainly it overcame some of the problems that Frears and Cusack might have encountered with certain 'top five lists' that arc such a feature of Nick Hornby's book. Cusack is Rob Gordon record shop owner and, if he is lo be believed, perpet ually unlucky with the women he loves. We meet him just as his current girl friend Laura (I hen Hjejle) is leaving him. This makes him look back at his 'top five all time worst break ups' from the time he dis covered girls at 14 to the present with some wonder ful cameos from Lili Taylor and (a pre- Michael Douglas) Catherine Zeta Jones. Meantime life in the record shop goes on wilh the loud and brash Barry (Jack Black - who goes a long way to acting the rest of the cast off screen) and the much quieter Dick (Todd Louiso). As Rob tells us, he hired them for three days a week four years ago and after that they just kept turning up. The three of them together are complete record nerds. The type that argue that The Jesus and Mary Chain are much better than Echo and the Bunnymen or rearrange their vast record collection to tell their autobiography. To take his mind off Laura. Rob goes to a gig with Barry and Dick and meets the completely flirtatious Marie dcSalle (Lisa Bonet). He has a fling with her to try to distract him from the fact that Laura is now going out with Ian 'Ray' Raymond (Tim Robbins) a completely over the lop Zen Buddhist whose speciality is conflict management. As in nearly any Cusack film, there is the requisite cameo from his sister Joan, this time ihcy arc joined by their father Dick. Watch for the moment when Ian/Ray comes into the shop to offer little pearls of wisdom lo Rob.

Guava back with a bang

a t Roisin there

return of w a s also One-

Ireland over the next couple of weeks, with dates in Letterkenny, Cork, and Donegal, and they return to play at Cuba* on August 16. Guava also plans to release another single, and will be recording an album early next year. So there's plenty lo look forward to from this great band. Guava's EP is available at live gigs and at Zhivago.