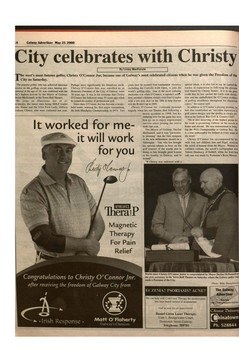 'he west's most famous golfer, Christy O'Connor Jnr, became one of Galway's most celebrated citizens when he was given the Freedom of the City on Saturday.
Perhaps more significantly his illustrious uncle, Christy O'Connor Snr, was enrolled as an Honorary Freeman of the City of Galway some 30 years ago. It was in his footsteps that Christy O'Connor Jnr followed some 33 years ago when he joined the realms of professional golf. Since then O'Connor Jnr has become a house hold name, winning his first major tournament, the Irish Matchplay Championship, in 1973. Two years later he secured four tournament victories, including the Carrolls Irish Open, to join the world's golfing elite. One of the most enduring memories was when O'Connor, a captain's selec tion, secured a famous victory over Fred Couples with a two iron shot on the 18th to help Europe win the Ryder Cup in 1989. Christy O'Connor Jnr overcame personal tragedy when his son Darren died following a motor accident in 1998, but his enduring love for the game has seen him go on to enjoy unprecented success since joining the senior ranks last year. The Mayor of Galway, Declan McDonnell, said it was "particular ly pleasing" that the first recipient in the new millennium should be a Galwegian - "one who has brought his special talents to bear on the golf courses of the world, and in doing so has brought great honour to his family, to Galway, and to Ireland". "If Christy was endowed with a special talent, it is also fair to say he carried the burden of expectation in following the glorious trail blazed by Christy Senior. It is to his great credit that he has carried the torch with distinc tion and has embellished the O'Connor tradition of golfing excellence throughout his illustrious career," the mayor said. In addition to O'Connor's playing prowess, he had also established an "enviable reputation in golf course design, and the quality is clearly evi dent at the Galway Bay Golf & Country Club". "He is also deserving of the highest praise for his work in promoting Galway on his travels at home and abroad. He was instrumental in bring ing the PGA Championship to Galway Bay. He is a true ambassador for Ireland in every sense of the word." Christy O'Connor Jnr, accompanied by his wife Ann and children Ann and Nigel, received the scroll of honour from the Mayor. Written on calfskin vellum, the scroll's calligrapher was Valerie Dunleavy of Salthill, while the Irish bog oak case was made by Portumna's Brian Murray.

The popular golfer, who has achieved immense uccess on the golfing circuit since turning pro essional at the age of 19, was conferred with the ity's highest honour by the Mayor of Galway, Declan McDonnell, at the Town Hall Theatre. He j o i n s an illustrious list o f 21 ecipients, the latest ones being SDLP leader John Hume and the USA First Lady, Hillary Rodham Clinton, who were conferred last year.

It worked for meit will work for you

World class: Christy O'Connor junior is congratulated by Mayor Declan McDonnell at the civic ceremony in the Town Hall Theatre on Saturday where the Galway golfer was made a Freeman of the City. Photo: Mike Shaughnessy

ECZEMA? PSORIASIS? ACNE?
We can help with Cold Laser Therapy the modem pain less laser based version of acupuncture. Call us now for an appointment.