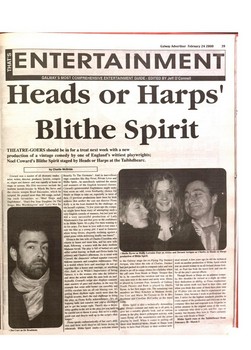 Heads o r Harps' Blithe Spirit
THEATRE-GOERS should be in for a treat next week with a new production of a vintage comedy by one of England's wittiest playwrights; Noel Coward's Blithe Spirit staged by Heads or Harps at the Taibhdhearc.
by Charlie McBride
Coward was a master of all dramatic trades actor, writer, director, producer, lyricist, compos er, singer and dancer- and was equally at home on stage or screen. His film successes include the wartime morale-booster In Which We Serve and the classic weepie Brief Encounter, which he scripted. He penned more than 300 songs, includ ing such favourites as 'Mad D o g s and Englishmen', 'Don't Put Your Daughter On The Stage, Mrs Worthington' and 'Let's Not Be Beastly To The Germans'. And in marvellous stage comedies like Hay Fever, Private Lives and Blithe Spirit , he mercilessly satirised the mores and manners of the English leisured classes. Coward's quintessential Englishness might make him seem an odd, even foolhardy, choice for Heads or Harps to take on, especially as most of their 22 previous productions have been by Irish authors. But neither the cast nor director Fiona Kelly is in the least daunted by the challenge, as she herself explains; "A few years ago the compa ny might have been wary of attempting such a very English comedy of manners, but last year we did a very successful production of Lady Windermere's Fan and that gave us the confidence to do Blithe Spirit It's a play I've been wanting to do for years, I've been in love with it ever since I saw the film as a young girl. I used to fantasise about being Elvira; elegantly reclining against a grand piano while delivering deadly one-liners!" Elvira is the late wife of Charles Considine who returns to haunt and taunt him, and his new wife Ruth, following a seance with the dotty medium Madame Arcati. The play is full of barbed wit and artful verbal fencing as Ruth and Elvira battle for primacy and Charles's affections. As is usual with Coward, the characters' refined repartee conceals hideous manners and complete ruthless ness. This is a world where love and marriage do not go together like a horse and carriage, or anything else. And, as in Wilde's Importance of being Earnest, it is the women who take the initiative and drive the action while the men look on inef fectually. Coward's script also displays consum mate mastery of pace and rhythm, in the way for example that some mild banter can smoothly and swiftly escalate into an all-out blazing row. It's getting those rhythms right, much more than the English accents, that's the real challenge in doing the play, as Fiona Kelly acknowledges: "It's all hopping balls and repartee and you've absolutel; got to get the tempo right. There's also a throw away quality to the wit in the play, yet you have ti be careful not to throw it away. But we've a really good cast and they're well up to the script's thai

Sheila Byrne as Ruth, Lorraine Fear a* Alrira and Dermot Arrigan as Charles in Heads or Harps production of Blithe Spirit. to the Galway stage for ex-Flying Pig Dermot nical wizard. A few years ago he did die technical Arrigan, who takes the role of Charles. Dermot work on another production of Blithe Spirit which had just packed in a job in computer sales and was was an award-winner in an all-Ireland drama festi val, so Paul has both the know-how and can-do about to jet off to sunny climes for a holiday when for all the play's special effects. the call came from Heads or Harps Trouper thai Though Heads or Harps arc an amateur compa he is, he cancelled his vacation and was on the ny, this shouldn't he viewed as a slight on cither very next train to the moist and misty west. Elvira their dedication or ability, as Fiona emphasises is played by Lorraine Fear, formerly of Galway "All the actors work very hard in their roles, and Youth Theatre and Ruth is played by Sheila when you think that some of them have done nine Byrne, in her first major role. The remaining cast or 10 plays you can sec they're experienced per members are Mary Kilackey as Madame Arcati. formers. Also, because I work in professional the Joe Corr and Marie McTiernan as Dr & Mrs aire. I strive (or the highest standards possible in Bradman and Caroline McCarthy as the maid every aspect of the production and ever) one in the Edftfc. company likes dial and respond* lo it I'd prefer to Blithe Spirit is also a technically demanding define amateur in the original sense of ihc word, ,...,,. Elvira's costume and make up is all grey, to as someone who does a job. not for ego or give her a suitably ghostly look, and at various money, hut because they love u That s certainly points in the piay there's poltergeist activity, with the case with Heads or Harps " vases (lying off the mantelpiece and the piano B l i t h e S p i r i t r u n s a l t h e T a i b h d h e a r c from playing by itself. When it comes to pulling off Fiona speaks enthusiastically of her cast s abili hrbrumry 2> - M a r c * 5 ties and how well they've all been doing in these neat theatrical tricks. Heads or Harps were rehearsals. Blithe Spirit marks i welcome return lucky to have Paul 01>eary as their resident lech