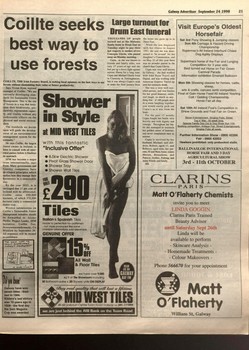 Cnillto c a o k c best way to use forests
COILLTE, THE Irish Forestry Board, is seeking local opinions on the best ways to i forests without diminishing their value or future productivity. Says Vivian Ryan, regional manager of Coillte: "We are currently developing stan dards for Sustainable Forest Management. This is the use of forests in a way that main tains their biodiversity, pro ductivity, regeneration capaci ty, and vitality without any undesirable effects on the physical and social environ ment. The standards we decide upon will guide the develop ment of an environmental management system for the company." He says Coillte, the largest w i t h this f a n t a s t i c forest owner in Ireland, is " I n c l u s i v e O f f e r " keen to consult with all inter ested parties before it finalises its approach. 8.5kw Electric Shower SFM has become a major Pivot Glass Shower Door issue internationally, says Ryan. Many governments and Shower Tray forestry companies have Shower Wall Tiles developed principles which outline how they manage their businesses in a sustainable way. By the year 2 0 3 5 , it is envisaged that 17 per cent of Ireland will be afforested. Coillte owns 450,000 hectares, of which 370,000 hectares carry a commercial timber crop. Written submissions on Coillte's Sustainable Forest Management initiative should be forwarded to Alister I t a l i a n & S p a i n i s h Tiles Pfeifer, Project Leader, SFM made to perfection by craftsmen Initiative, Coillte T e o , - not mass produced like some Newtownmountkennedy, Co cheaper alternatives sold elsewhere. Wicklow by September 30.

large turnout for
THOUSANDS OF people turned out at the Maloney family home in Drum East on Tuesday night to pay their last respects to mother-of-two Concepta Glavin, who passed away on Monday morning. Cepta, as she was known to friends and family alike, was only 37 years-of-age and she had put up a brave fight against serious illness for a long time. Cepta and Michael Glavin lived in Canteeny in Turloughmore, but it was always Cepta's wish to make her final journey from the home she grew up in in Drum East. When she was diagnosed with her illness in August 1997, she said she was deter mined to 'be around' for her daughter's Communion, and on May 23 of this year there was no prouder parent in the church than Cepta Glavin. Cepta was very well known in Galway - she had worked with John Ryan Travel and Digital, and was working with American Express Travel up until her untimely death. She was a very well trav elled person, and was known for her good humour, smile, and laugh, as much as any thing else - if 100 people were in a room laughing together, you would easily pick out Cepta's as it was from the heart. For the past 13 months Cepta fought her battle very bravely and with dignity and courage. Throughout her bat tle she managed to maintain her golden sense of humour, and never complained once to anyone. Cepta is survived by her husband, Michael, and chil dren, Robert, aged 11, and Rebecca, aged nine; her par ents, PJ and Nora Anne; sisters Marian, Bernadette, and Patricia; brother, Padraig; and many friends and family. KK

CLARINS
P A R I S

All responses will be treated in confidence.

Linda will available to

Galway have won seven titles - their last in 1966. Kildare's last victory was 70 years ago in 1928 - the first day the Sam Maguire Cup was awarded.

we are just behind the AIB Bank on the Tuam Road