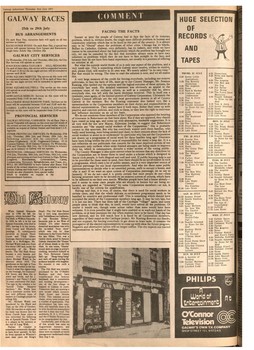 G L A R CS AW Y A E
25th to 29th July B U S ARRANGEMENTS
On each Race Day, excursion fares will apply on all bus service* to Galway. RACECOURSE BUSES: On each Race Day, a special bus service will operate between Eyre Square and Racecourse. Single fares: Adults 30p; Children 20p.

COMMENT
FACING THE FACTS
Sooner or later the people of Galway had to face the facts of its itinerant problem, which is, without doubt, the single most difficult problem in human and community relations which has to be faced in this part of the country. It is always easy to be "liberal" about the problems of other cities. Chicago has its blacks, Belfast its Catholics. Galway, very definitely, has its tinkers, and while we have reason to be concerned about the bad publicity which the problem has brought our city, we can be consoled by the fact that outsiders always seem to have easy solutions to problems which they do not have to face straight in the face, and because they do not have first-hand experience, are usually in a position of offering no solution at all. But what the outside world thinks of us is only one aspect of the problem, and a very small one. This is something which Galway must resolve, wishes to resolve, and, please God, will resolve in its own way. We nearly added "in its own time." But that would be wrong. The time to start the solution is now, and we all realise this. A very large measure of the credit for forcing everybody, including our evasive politicians, to face the facts of life, must go to our County Manager, Mr. Seamus Keating, who spelled out the options and the logical outcome of those options, for everybody last week. His detailed statement was obviously an appeal to the common sense of the ordinary citizen, as well as a reminder that he, above everybody else, was left with the harsh decisions involved. This in itself was a reminder, once again, of the limited powers of Galway Corporation. Ultimately the County Council officials are the real local government powers in all of County Galway at the moment. But the Keating statement also looked very like a memorandum to the Corporation members on their duries and responsibilities as elected representatives. They cannot have it both ways. Either they come up with positive and concrete policies, and stick to them, or they lose the right to intervene and influence decisions on an ad hoc basis. We do not condemn those members of the Corporation who opposed the housing of itinerants in Bohermore on that basis alone. But if they are opposed, they should have stated so long ago, and come up with alternative, workable suggestions. It is all very well for our new Mayor, Alderman Jordan, to suggest that Bohermore residents are "the unpaid social workers of the Corporation." She is probably correct in this assertion. But why has everybody waited until three families, who badly need housing, were being settled next door, to show concern about the lack of social workers to assist in re-settlement? In particular why has not the Corporation not drawn up a programme of social work for these families long ago? Itinerants have been living within the city's area of responsibility for many a long day. It is a sad reflection on our politicians that concern for the most deprived section of our community only surfaces when some limited attempts are being made to improve their lot, which in consequence, disturbs a wider section of the voting public. The County Manager is also quite correct when he stresses that any directives by the Corporation not to house those in need under a scheme which is designed to house such people, is both illogical and null and void. If public housing help is not to be provided for those most in need, then there should be no involvement in such a programme, which costs a lot of public money, and is a very important source of political patronage for our local representatives. And who are these same public representatives to decide who is an unsettled person, unfit to occupy a house, and who is not? If we want an open system of Corporation patronage, let us say so honestly. If we do not--and it is pretty certain that most people do not--then housing priorities have to be decided by an ordered system ot criteria, which have to be adhered to on their own merits. Whether people have had a house already-- and it seems in some cases people who are already in houses but are being re located, are regarded as "itinerants" by some Corporation members--or not, is hardly one of the criteria for qualification. Having said that, it is true, of course, that there is need for social workers in certain cases, and that the whole delicate re-settlement programme needs to be handled by sensitive and professional staff. This is something which should have occupied the minds of the Corporation members long ago. It may be very late, but it is not too late. There has been talk of the Castlegar "village" again, and some people seem to think that this, in itself, would have solved all the problems. Of course it would not, though some action rather than none would have been welcome. It is even possible that it might have enabled us to wash out hands of the problem, or at least postpone the day when realities have to be faced. That day has now dawned, and we will watch how it is faced by all Corporation members, regardless of their stand on the Castlegar project. Mr. Keating deserves our thanks, and our support, for forcing everybody to get down to brass tacks. It remains the prerogative of the elected representatives to come up with ideas for future progress. Negative and obstructive tactics will no longer suffice. The city expects our elected representatives to solve this problem.

When Samuel Simcocks died in 1796 he left his property, which included The Old Malt, to Wilkin* Simcocks. In 1836 he left it to his son Samuel Simcocks, who died in 1851, leaving it to his sisters, Anne Coyne and Elizabeth Jennings. It subsequently devolved to Joseph Denis Coyne and Ulick Albert Jennings, then to a Conroy and finally to a McKeague. Mr. Michael Walsh took over from him about 1907 and, under the ownership of the Walsh family, The Old Malt House became a very famous pub indeed. Our photograph show* Michael Walsh in the doorway about 1910. The gentleman on the right is Tom Ready who worked in the bar. There is some fine signwriting on the frontage, for Guinness' XX Stout, and Bats Ale in wood and bottle, and for J. Jameson's and Power's 8 and 10 years celebrated Old Malt. The sign in the window is for 'Special Today: Skippers Sardines." Mr. Walsh later had a hardware section here and sold different types of baskets to Claddagh people for selling fish. Mr. Michael Walsh was murdered by the Black and Tans on the 19th of October, 1920. He was shot at night, and hi* body was thrown into the River Corrib from where it was recovered the following day at Spanish Parade. There is a plaque in his memory at the end of Long Walk. Padraic O Conaire is sometimes erroneously thought to have lived upstairs. In fact he lived upstairs in Winston's next door (now the King's

Head). The Old Malt House has a very long association with Taibhdhearc na Gaillimhe. It was Brendan Behan's favourite pub in the West of Ireland. It's other famous theatrical association was with the so-called 'bum show' which was run by Alan Seabreeze in the Union Hall in the late fifties. This was a variety show, acted by famous Galway characters like 'Shoots' all of whom drank in the Old Malt. In one scene, 'Shoots' would dash on stage in priest's clothing, introduce himself as the Very Reverend Canon Ball--go 'Bang-bang-bang' and dash off again leaving the audience helpless with laughter. No wonder it was such a success. The Old Malt was recently purchased by the O'Malley Brothers and they have transformed this famous landmark into a remarkable and exciting development-- one of the best things to happen to Galway in years. Tomorrow they are opening a new arcade which connects High Street and Middle Street. This contains several shops, seven town houses and a number of apartments. This development has been care fully and tastefully done to fit in with the old city atmosphere and this it doe* very well. The architects, H. E. L. O'Connor and the O'Malley Brothers are to be congratulated for this. Incidentally, part of the site of this arcade was once an Augustinian nunnery, and contrary to common rumour, there were no tunnels or secret passageways underneath when they dug it up.